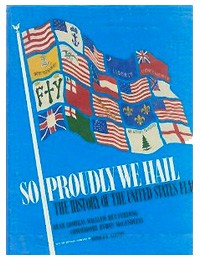 Today marks the annual Flag Day celebration commemorating the adoption of the Star Spangled Banner as the national flag in 1777. The importance of the flag as the symbol of our country cannot be stressed enough. In light of this, it seems appropriate to draw attention to a book that delves into the history of the flag. This book, fittingly titled “So Proudly We Hail: The History of the United States Flag”, is one of the only compendiums of knowledge that succinctly and accurately describes the various flags (Notably Old Glory, Naval flags, Army flags etc.) used throughout the history of the United States. The book contains a rich historical narrative that begins with early flags preceding the creation of the United States and ends with modern flags such as the current 50 star flag.

The authors of the book, Rear Admiral William Rea Furlong and Commodore Byron McCandless, both served with distinction during the First and Second World Wars.
Furlong was born in Allenport, Pennsylvania, on May 26, 1881. He graduated from the Naval Academy in 1905. During the First World War, he served in various capacities, notably as a gunnery observer. From 1923 to 1926, he served in the Office of the Chief of Naval Operations at the Navy Department. He would later to return to the office in 1928, where he headed the Policy and Liaison Section, Office of Island Governments. He served for a short time as Operations Officer on the Staff of the Commander in Chief, U.S. Fleet. He was promoted to the rank of Rear Admiral in 1937, and served as the Chief of the Bureau of Ordnance, Navy Department. From April 18 to December 25, 1941, he served as Commander Minecraft, Battleforce, and survived the torpedoing of his flagship, the USS Oglala, during the attack on Pearl Harbor. His greatest contribution to the war effort proved to be his time as Commandant of the Navy Yard at Pearl Harbor. His duties included the management of a salvaging project of sunken ships as well as the repair of ships damaged during the attack. He was awarded the Legion of Merit and the Gold Star for his efforts in this endeavor. He retired from all active duty on March 4, 1946.

McCandless was born in Endicott, Nebraska, on September 5, 1881. Like Furlong, he graduated from the Naval Academy in 1905. He served aboard the USS Maine in 1907, which undertook a trip around the world as part of the Great White Fleet. Between 1915 and 1916, he served as Aide to the Chief of Naval Operations and then Aide to the Secretary of the Navy (Josephus Daniels). He was commander of the newly commissioned USS Caldwell from 1917 to 1920. As a result of his actions during the war (patrolling and escorting convoys through the Atlantic), he received the Navy Cross. During the Second World War, he served as Commandant of the Naval Repair Base, San Diego, and was awarded the Legion of Merit for his efforts in managing the base. He was relieved of active duty for the second time on September 25, 1946. In addition to these exploits, he also invented aids to increase the efficiency of gunnery and a salvage device for freeing barges/craft that were stranded in landing operations.

Admiral Furlong notably was asked by President Eisenhower to submit a new design for the Star Spangled Banner, due to the addition of two more stars as the result of the inclusion of Alaska and Hawaii into the Union. This design was subsequently adopted and the 50 star flag remains with us to this day.
Commodore McCandless advised Presidents Woodrow Wilson, Franklin D. Roosevelt, and Harry S Truman on flag matters as a result of McCandless’s expertise.
Furlong and McCandless knew one another due to their time at the Naval Academy. During their time spent working at the Navy Department, they answered inquiries on flag issues, hence the development of their interest and expertise on flag matters.

As a result of their experiences, Admiral Furlong and Commodore McCandless understood the importance of the flag as a national symbol. The two were inspired to write a book on flags after discovering that existing sources of information were not up to the task of providing a definitive body of knowledge concerning flags. They therefore sought to compile research on the flag and mold said research into a form that was accurate, concise, and most importantly definitive. Unfortunately, Commodore McCandless passed away before the book was finished. Admiral Furlong finished the book, but passed away before it was published. Dr. Harold D. Langley (Division of Naval History, National Museum of American History) continued to edit the book and published it in 1981, thereby fulfilling the goal of both Furlong and McCandless.