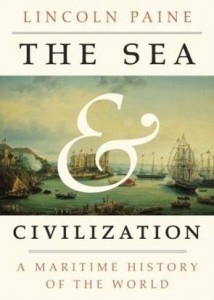 This book could easily be titled, “The Greatest Sea Story Ever Told.”  The subtitle proffers the scope of the work, which Lincoln Paine delivers in grand style.  With 599 pages of text, 48 pages of bibliography, 17 maps, 26 pages of color images, and 46 illustrations, it was a prodigious undertaking. The Sea and Civilization is a worldview rarely seen today. It ventures far to acquaint us with the influence of the seas and rivers and relates where man has been and how he arrived to where he is now.  This noteworthy volume is written in a prose style as engaging as the stories included in the volume. Paine tells of the people throughout history who have explored, pioneered, traded, fought, and died; built and lost ships; opened markets; conquered adversity; established and spread religion; made and lost money; and used the waters comprising seventy percent of our planet to further human civilization. This monumental product of intense research is presented in a manner easily readable by scholar and layman alike.

The book contains detailed descriptions of the vessels employed and the means of navigation utilized throughout. The author begins with the astounding distances and means employed by the inhabitants of the Pacific, the dispersion of people to the Americas, and the founding and expansion of contact, communication, and trade by sea and river.

As trade developed along the Nile, Pharaonic Egypt stretched its influence along the Eastern Mediterranean.  As this influence declined other peoples filled the gap in succession.  The Phoenicians were followed by the Greeks, Carthaginians, and Romans.  In the East, the Indian Ocean trade centered on seaborne communications and trade to Southeast Asia, China, and Japan.  As maritime traffic grew, nations recognized the need for protection of their interests. Navies and maritime laws became established.

Today, few of us dream of going to sea.  A trip to cities that were once ports of call for ships resembles little of those by-gone days.  With its shipping and the variety of seamen from around the world, as described by author Herman Melville, the port of Nantucket of his day, as well as other previously well-known ports of call for ships indeed have vanished.

If there is any criticism of this work, it would be the anchoring of maps at the front of the volume. This makes the reader to mark their place when referring to the map.  That being said, it is a small inconvenience for such an overall rewarding experience.

Craghead serves with the Museum of the Confederacy in Richmond, VA.