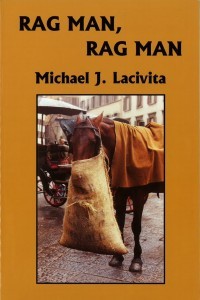 The curious title of this memoir refers to the garbage man who came to pick up items for recycling purposes. This is just one of the many jobs the author talks about during the course of this very personal story.  Explicitly, the author compares his own stories collected in a sort of stream-of-consciousness approach with the scraps that a “rag man” would collect during the Great Depression.  This sort of book resembles memoirs like Angela’s Ashes in its focus on education, hard times, family, and immigrant experience.  Even more so, this book reads like the transcribed stories of a chatty and somewhat crotchety grandfather.

Some comment must be made of the contents of this book, as it is a work best read in small bits. The connections between different short essays can be tenuous.  The content of this book ranges from an appreciation of hobbies like gardening and photography to stories about Amish horse buggies, the troubles of buying cameras in Japan, or the persistence that was required to find a job in Depression-era Youngstown, Ohio. There are also stories of the serendipitous nature of running into veterans from the same small area, and also the divided and impoverished nature of early 20th century rural Italy.  All of these essays have to do with the life of the author, but it appears the order of essays is determined by something in one essay reminding the author of another story to tell in a way that can sometimes be repetitious, but nonetheless personal and genuine.  As could easily be imagined, the author spends a great deal of time explaining terms from Italian as well as his own childhood that are no longer in common currency.  These explanations, which fill many pages, add to the educational interest of this particular work as well.

This volume is intriguing from the perspective of the historian for several reasons. The first is the way the book provides insight into language and culture rooted in the Italian immigrant experience of the early 20th century.  Second, this book shows an intriguing perspective on the experience of workers on the home front of World War II, as he instructed women in a factory on welding the LST (Landing Ship, Tank) boats and later served on the crew of a few of the same boats in the war.  Although his life as an enlisted sailor only took up a few years of the author’s life and subsequently only about a fifth of this book, it nonetheless is of interest to students of naval history, especially from the perspective of an enlisted seaman.  Also of interest to those students of war and society is the way in which enlistment in World War II helped people like Lacivita show their loyalty to the United States (though it is telling that as an Italian-American he was sent to the Pacific front), and helped them find educational opportunities thanks to the GI Bill.

The book is organized in a broad chronological fashion despite its somewhat scattered contents. The book has a short forward from one of the grandsons of the author, a sixteen year old who accurately captures his grandfather’s passion as a writer as well as a measure of his personality that comes through the pages of this work.  The first part of the book, “Atop The Apennines,” looks at the Italian background of the author and his wife, and contains a lot of humorous stories about mules floating to the Adriatic and other more poignant tales of divided families struggling in near-starvation conditions because of remarriage and feuding over limited resources in an atmosphere of limited opportunities for advancement.  The second part, “The East Side and the Great Depression,” looks at the author’s life growing up in Youngstown, Ohio during the Great Depression. This part of the story is full of poignant stories of a family too proud to take government assistance.  The third part of the story, “Aboard the U.S.S. LST 582,” looks at the author’s war experiences, and is of the most direct interest to those who are interested in naval history.  The fourth part, “Settling Out,” closes the book with a look at the author’s life since World War II, spending far more time on the author’s hobbies and interests and sports than on the details of his courtship of his longtime wife.  There is a reticence about personal matters that is rather telling, but also a bit unfortunate in that it leaves a bit of a gap in the life of the author.

Taken as a whole, this is a book of interest both as an account of a talented writer of his life and times and a source of stories about World War II from a generation slowly dying away.  Fortunately for us, this author left us an engaging and warm account that has an obvious aim of teaching the critical comparison between past generations and our own.  Intriguingly, the volume contains a few photographs from the author that help to explain the story of his life, a story well worth reading.