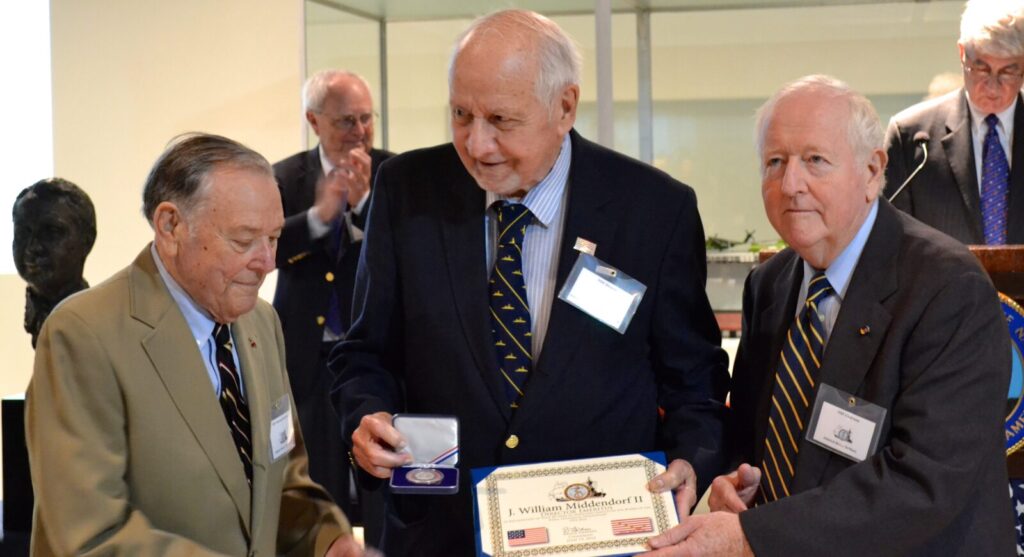 Each year, the Naval Historical Foundation holds a meeting in Washington, DC to meet with our members, volunteers, and friends to discuss our current and future plans.  Nearly one hundred supporters gathered in the Navy Museum last Saturday for a day of celebration, commemoration, and friendship.

This is certainly a year of many commemorative celebrations: The 70th anniversary of pivotal World War II events, the ongoing sesquicentennial of the American Civil War, and the beginning of the centennial of World War I. This year focused on the continuing bicentennial anniversary of the War of 1812. The Annual Meeting was held in coordination with the Smithsonian Institution’s Raise it Up! Anthem for America Flag Day event held in Washington, DC and around the country, which honors the flag, on display at the National Museum of American History, which inspired Francis Scott Key to pen the words 200 years ago this September, that became our national anthem.  The Naval Historical Foundation and National Museum of the United States Navy were partners for the event.

The day began with a meeting of our Board of Directors. Rear Admiral Kathleen Paige was elected as the Foundation’s newest board member.  We are very pleased to welcome RADM Paige to the board, and look forward to her expertise and insightful comments as a board member. Naval History and Heritage Command Director Captain Jerry Hendrix, USN also offered his remarks during the Board of Directors meeting.  Captain Hendrix will retire from the Navy at the end of this month (You can read about Captain Hendrix in the latest issue of Pull Together). 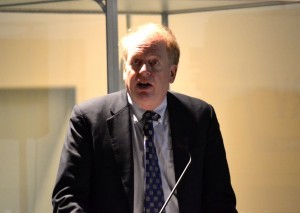 At the Annual Meeting venue, after a brief welcome by NHF Historian Dr. David Winkler, Vice Admiral George W. Emery, author of In Their Own Words: The Navy Fights the War of 1812, introduced the David Leighton lecturer to members and special guests in attendance.  Washington Post reporter and noted author Steve Vogel delivered a timely talk about his book, Through the Perilous Fight: From the Burning of Washington to the Star-Spangled Banner: The Six Weeks That Saved the Nation. Vogel expertly recounted the series of events in the Washington, DC and Baltimore areas that culminated with the writing of the National Anthem, preceded by the Battle of Bladensburg, and the burning of the Capitol, White House, and Washington Navy Yard where he was speaking. Both authors remained after the lecture before the business meeting to inscribe copies of their books for the guests.

The highlight of the Annual Meeting was the recognition of Ambassador J. William Middendorf II as Director Emeritus of the Naval Historical Foundation.  Ambassador Middendorf served as a director of the Foundation for forty years. Among his many accomplishments, he served as the Secretary of the Navy and US Ambassador to the European Union.

David and Ginger Hildebrand sang two War of 1812 songs in honor of Ambassador Middendorf, “Decatur and the Navy” and “Perry’s Victory:”

Chairman Emeritus Admiral James L. Holloway III, USN (Ret.) presented his former colleague and good friend with a congratulatory certificate and silver War of 1812 Medal. Both Emeritus members had many insightful and heartfelt things to say to one another about their combined 68 years of service to the Naval Historical Foundation.

A true renaissance man, Ambassador Middendorf is also an accomplished composer and artist (He sketched NHF Chairman ADM Bruce DeMars during the meeting!). In recognition of his myriad achievements, the formal meeting adjourned to the sounds of his “Midway March,” a popular Navy Band march composed in honor of the U.S. Navy’s decisive WWII victory at Midway.

The final event of the day was a catered lunch, which the Foundation was able to provide thanks to the generosity of Foundation director Dr. Jack London. David and Ginger Hildebrand serenaded guests at the luncheon with a selection of music from the 1812 time period. Members old and new had a chance to swap stories and catch up with one another. Colin McNulty, A US Army officer working for the Naval History and Heritage Command at the National Museum of the United States Navy, met a former colleague from his time serving overseas in a joint command during the meeting. As this was a year of several staffing changes, Foundation staff old and new were in attendance to converse with the men and women who support the Foundation and make it a continued success.  Thank you to everyone who attended, and we look forward to another successful year.  See you at next year’s meeting!

Thinking about becoming a member? Need to renew?  GO HERE.