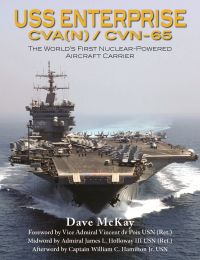 Everyone remembers where he or she was on September 11, 2011.

Enterprise was off the coast of Yemen heading south at Flank Speed.  There, the crew learned of the terrorist attack on the twin towers. Enterprise’s Captain slowed the ship to all ahead standard. When the second plane hit the downtown tower, the Captain ordered the ship to come about. The ship, making a smooth 180-degree turn, headed North straight up the Arabian Sea to await orders from Washington. Enterprise was about to enter her third war. Like her predecessor, CV-6, she was the first naval unit on hand to protect her nation.

What can one say about the name and ship this book is written about.  With the possible exception of the Constitution, the name Enterprise is the most illustrious name in the history of the United States Navy. It stands for honor, glory, and pride. Some former crewmembers say that the Enterprise carriers had souls. Perhaps they did.  The name Enterprise has been worn by nine ships, the last two being aircraft carriers (CV-6, CVN-65 with a third to come, CVN-80).

David McKay has done a marvelous job in writing this book. It is recommended to anybody who studies naval history. I have read books on the aforementioned subject for over 50 years, but I have never found such a well-done book as that done by Mr. McKay. To be honest, I can find nothing wrong with the book. In short, it is superb. It can be said about the two carriers ENTERPRISE as well as Mr. McKay, paraphrasing Shakespeare’s Othello “Let it be said with just pride that that they have done the state some service.”

BUY AT THE NAVY MUSEUM STORE

Samuel Loring Morison is former naval officer, writer and naval historian in his own right. He served in the Vietnam War.