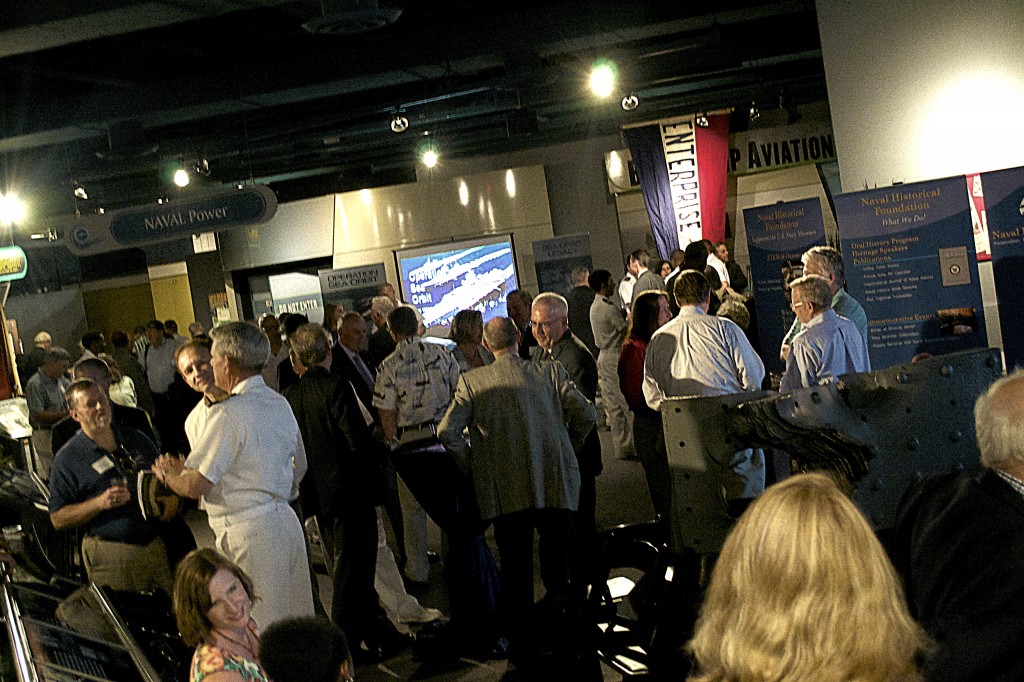 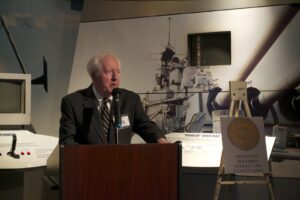 Even in her inactive, stand-down status today, as she undergoes the laborious process of defueling her eight nuclear reactors, Enterprise remains a celebrated chapter in the history of the United States Navy spanning the twentieth and twenty-first centuries. The Foundation is dedicated to preserving and honoring this kind of historical legacy to inspire future generations to follow in the footsteps of our great naval heritage.

“Sea Orbit came about at a time when we were doing much to race our  Cold War adversaries to the furthest reaches of the universe [. . .] This operation set the stage for a half century of nuclear-powered aircraft carriers in the nation’s defense, many of which have called Norfolk home.  It is only fitting that this event is held here, as Norfolk was the start and end point of the Sea Orbit voyage.”

Guests were then treated to a video salute to the many accomplishments and legacy of Operation Sea Orbit. The video was produced by Mark Huffman at 26th Street Media.

The night concluded with a special presentation by Enterprise CO Captain “Boomer” Hamilton. Captain Hamilton discussed the latest saga of Enterprise since her inactivation ceremonhyin December 2012, following her 25th and final deployment. A skeleton crew of approximately 700 sailors is halfway through Enterprise’s  inactivation at Newport News Shipbuilding.  This is a truly herculean task, as she is the first ship of her kind to undergo such a transformation. He estimates that the next phase for the ship (movement, disposal, and recycling) will begin around 2017 and last several more years before her final demise in Bremerton, Washington.

Hamilton credits the success of the current offload program to his sailors, who he admitted “have performed brilliantly,.” These sailors are creating a template for future Nimitz-class carrier decommissioning and disposal. He is very aware of the challenges facing him and his crew in today’s economic climate, with the stress of the absolute necessity for safety and security. “Whatever we do has to be safe for the environment,” he noted, “and safe for our people.” 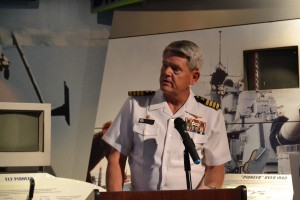 Captain Hamilton went on to discuss other challenges Enterprise has in her final years, including the projected 8 million man-hours for the defueling process.  He also provided a series of scenarios for the eventual movement of Enterprise to the west coast, which included the possibility of her being carried by a massive semi-submersible heavy-lift ship around to the west coast.

It all seemed too much for some Enterprise veterans. Looking at the current state of the ship with what Captain called a “flag-top haircut,” several veterans welled up with tears.  The emotion felt through the room was palpable. Her masts are gone forever. Her hull and deck may look the same for now, but in due time she will all become a fragmented shell of her former self. But she will always be the “Big E” to everyone who had the good fortune to serve in Enterprise.

Hamilton did end on a bright note, showing a concept drawing of future Enterprise, CVN 80.  “This will not be the end of Enterprise; it’s coming along,” he concluded. Let’s hope there will always be an Enterprise in the Navy’s vessel register.

Several important members of the Hampton Roads community came out to honor the legacy of Sea Orbit, including U.S. Fleet Forces Command’s Director of Maritime Headquarters RADM Bradley Gehrke, Newport News Shipbuilding President Matthew Mulherin, and Gary Behmn, General Manager and Vice President of Enterprise-Rent-A-Car of Virginia. Captain Hamilton was joined by a number of his crewmembers and their guests. 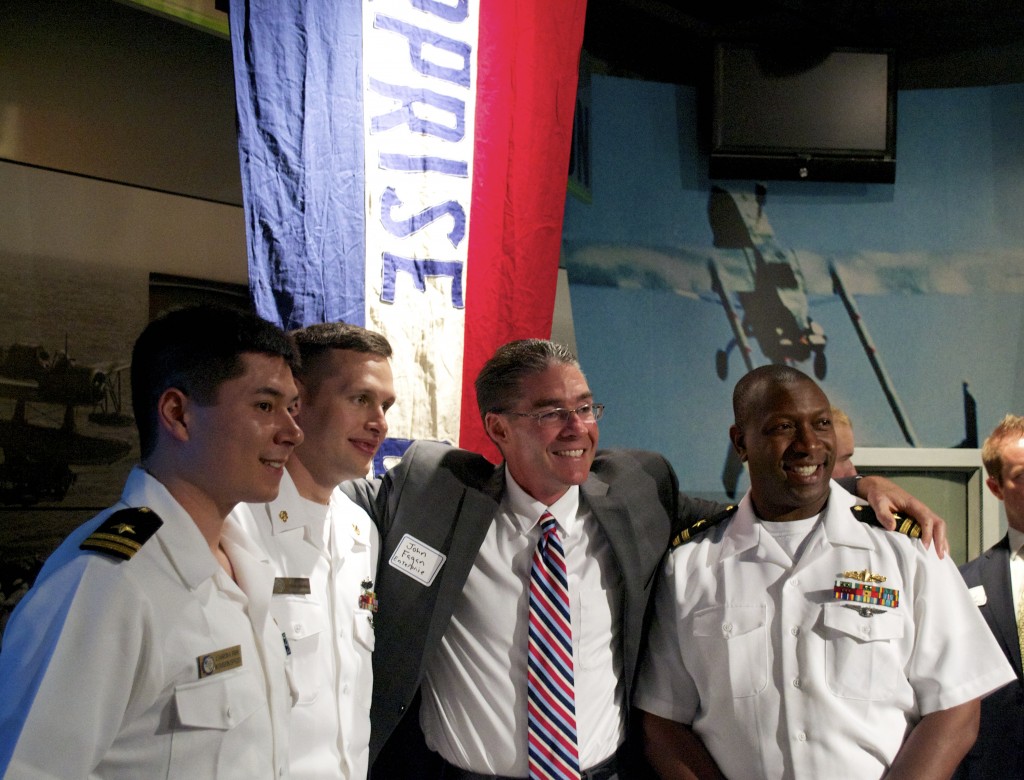 NORFOLK, VA (May 6, 2014) Enterprise Rent-A-Car Rep for the Norfolk area John Fagan poses for a photo with current sailors of the “Big E.” (NHF Photo by Matthew Eng/Released)

The real VIPs of the evening, however, were the veterans of Operation Sea Orbit, including men of Bainbridge, Long Beach, Enterprise, the embarked air wing, and Carrier Division Two staff.  Several  members from each of these Sea Orbit components attended this event, including retired Commander Mike Michaelis, the son of Enterprise’s Commanding Officer during the voyage. It was wonderful to see so many veterans conversing with one another, reliving the countless memories of their storied naval careers.

Retired accountant Ed Oswalt provided the Enterprise pennant prominently displayed in the reception area. Oswalt is a local Hampton Roads resident who served in the embarked staff during the 1964 cruise. “When you are a young sailor, you never think about the significance of what you are doing, it just happens,” Oswalt said at the event. “Now that I am older, it’s something I need to tell my children and grandchildren.” Many veterans were pleased to see it suspended as the backdrop for the event where it became a popular staging area for photos of current and former sailors alike.

A very special thanks to the Hampton Roads Naval Museum and Nauticus for their help and expertise making the Naval Historical Foundation’s celebration of Operation Sea Orbit’s golden anniversary possible. We could not have done it without you!