(This is the first of a series of blog posts that discuss the role that Casco Bay played during the Second World War. This is Part I of the series. “Going Ashore” are the collected posts from George Stewart, retired Navy Captain and NHF blog volunteer).

This series of blog posts will provide an overall picture of the naval events that occurred in Casco Bay, Maine, during World War II. It is a scaled down version of presentations that were given at historical museums in the Portland, Maine, area in 2006 and 2009.

Casco Bay is an inlet off the Southern Coast of Maine. It includes the cities of Portland, South Portland, Cape Elizabeth, and a large number of islands, several of which are only accessible by ferry. During World War II, it served as a major naval base in the North Atlantic. It also contained shipyards specializing in the construction of Liberty Ships. My connections to the bay included annual summer visits to my grandparents on Peaks Island, the most heavily populated island in the bay, where my grandfather worked as a lobsterman. A map of the area during the war showing the basic geography and the major coastal defense facilities follows. Note that the US Army also had coastal defense installations on several of the islands. Battery Steele on Peaks Island included a pair of 16” battleship style guns pointing to seaward.

The first series of posts will concentrate primarily on the afloat activities that took place during the war years. The events in Casco Bay formed an integral part of the Battle of the Atlantic.

All access to the bay from the ocean was by way of gates through anti-submarine nets. The bay was also protected by magnetic loops and hydrophones capable of detecting submarines and by buoyant mine fields, as shown in the above map. 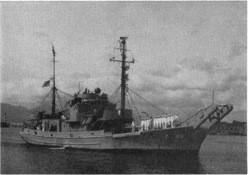 The basic subjects that these posts cover include:

To summarize the role that Casco Bay played during the war, it is necessary to look at the overall events that occurred between 1939 and 1945. The naval war in the Atlantic can be summed up into three phases. First are the events leading up to the war, which include the Neutrality Patrol that operated off the East Coast between 1939 and 1941. Second is the Battle of the Atlantic, which was primarily a war against the U-Boats. Finally, the U.S. Navy provided support for the invasions in North Africa, Northern Europe, and the Mediterranean.

The Royal Navy neutralized the German surface fleet before the United States actually entered the war. The Pacific Theater, by comparison, involved an opponent with credible air, surface, and submarine forces.  It also encompassed a much wider area and lacked advance bases. Therefore, war in the Pacific was fought primarily by fast carrier task forces. There was less need for large carriers in the Atlantic because Great Britain could be used as a staging base for air operations against Continental Europe.

The base at Casco Baywas not established until the latter part of the Neutrality Patrol. However, it would play a major role in winning the Battle of the Atlantic. Casco Bay continued to provide ships for support of the invasions of Europe and operations in the Pacific right up until the end of hostilities on “V-J-Day.” The major functions of the naval base can be summarized as follows:

The year 1939 was marked by events that would eventually lead up to World War II. The most noteworthy naval events in the Atlantic were associated with the declaration of war between Britain and Germany and the operations of German commerce raiders. In the United States, the Neutrality Patrol was established. But at the beginning of 1939, the bulk of U.S. naval strength was in the Pacific. The Navy was ill equipped to handle the events that would transpire in the Atlantic over the upcoming years. At that time, world events previously had little or no impact upon Casco Bay. That would change.

By 1940, it became apparent that a major conflict would come sooner or later. While the U.S. remained neutral, it was actively providing assistance to Great Britain in the form of the “Destroyers for Bases” Lend-Lease agreement. The success of unrestricted submarine warfare by Germany made it apparent that the North Atlantic became a major battleground. Steps were being taken to increase naval strength in that area. At the time, the need became apparent for more naval facilities in the northeast. This would end up with the establishment of new bases at Argentia, Newfoundland, and Casco Bay in 1941. Another event that would significantly impact on Casco Bay during the war was the establishment of the East Yard in South Portland by Todd-Bath Corporation. The original purpose of the yard was to build thirty “Ocean Class” freighters for the British. The basic scenario of the Battle of the Atlantic is shown in the following illustration: 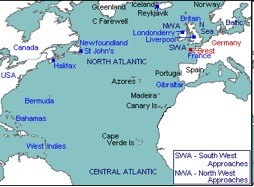 In order to fulfill its new responsibilities in the North Atlantic, it was necessary to establish an inner and outer North Atlantic bases. The only existing naval base in the Northeastern United States with sufficient space was in Narragansett Bay, Rhode Island. However, it was too far from the convoy routes. Casco Bay offered plenty of space, protected anchorages, and nearby convoy routes. It is located in close proximity to the city of Portland, which offered good logistics and support facilities.  For this reason, it was chosen to fill the role of the inner base. By the end of 1941, the base was established with the Senior Officer Present Afloat (SOPA) Rear Admiral Ferdinand L. Reichmuth, COMDESLANT (Commander Destroyer Force, Atlantic) embarked in the destroyer tender USS Denebola (AD 12) as his flagship.

In the process of developing these posts, a database was compiled from various sources. At least 770 U.S. Naval and Coast Guard are on record as having visited the bay during the war years. It may be possible to identify more visitors with further research.

For the outer base, the Navy chose Argentia on Placentia Bay, Newfoundland. Rear Admiral Arthur Bristol, Commander Support Force, established his headquarters there. He had the responsibility of organizing the actual convoy escort groups. COMDESLANT functioned primarily as a Type Commander, which was responsible for providing an adequate number of destroyers and ensuring their readiness for convoy escort and ASW patrol duties. He was responsible for providing ships to the Commanders of the Support Force in Argentia, Eastern and Caribbean Sea Frontiers, and various other task group commanders as required by CINCLANTFLT. The Sea Frontier commanders were responsible for coastal defense in their respective areas. These requirements were frequently in conflict at the beginning of the war. Rear Admiral Bristol was also responsible for training and readiness of East Coast built destroyers that were scheduled for immediate transfer to the Pacific Fleet.

Another noteworthy event that occurred during the year was the ground breaking for the Todd-Bath Shipbuilding Corp. West Yard in South Portland. Between 1941 and 1945 as the New England Shipbuilding Company the East and West Yards would employ more than 30,000 people and build 266 Liberty Ships.