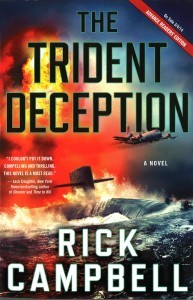 Retired Navy submarine officer and author Rick Campbell offers an exciting story of how a US Navy Trident nuclear sub, the USS Kentucky, is given falsified orders to launch all twenty-four of its nuclear missiles at Iran. However, these orders are fraudulent. They were not issued by the President of the United States, but by a cabal of rogue agents in Israel and America instead. The work of these agents extends to the Kentucky, whose communication equipment was altered to prevent a recall order, in the almost certain event that the deception will be uncovered before the actual launch. The Kentucky is in Hawaiian waters when it receives its mission orders and must proceed westward to reach launch range.  This requires her to maneuver past U.S. Pacific Fleet subs, planes, and surface ships, which, to the crew’s surprise, are trying to stop or sink her.

Some parts of the storyline here are necessarily condensed, but the suspense continues to build.  A senior COMSUBPAC officer is then sent to Australia to plead for help and winds up on board Australian Navy diesel-powered submarine assigned to the chase.  Heightening the emotional impact, the SUBPAC captain’s son is an officer and crewmember on the Kentucky; if his mission to stop the Kentucky is successful, his son will likely die.  In the meantime, some of the Kentucky’s crew is having serious misgivings about carrying out a mission that would literally destroy an entire nation and its population of 75 million.  The Commanding Officer of Kentucky has to confront the distinct possibility that some key crewmembers may refuse to carry out their orders…or even mutiny.

In the meantime, things happening in the U.S. and Israel gradually peel back the cover of the disloyal Israeli and American agents. These individuals are carefully monitoring the progress of Kentucky’s strike, and taking action to ensure that the mission is carried out, regardless of the consequences to both countries. This reviewer is loath to tell much more about the plot for fear of spoiling the excitement for prospective readers.

Campbell’s audacious plot and storyline are reminiscent of the late Tom Clancy’s earlier works, filled with continuous action and suspense, as well as unexpected twists and turns in the plot.  Campbell’s submarine experience is put to good use when it comes to conveying the feel of being aboard a nuke, particularly when it comes to making difficult and critical repairs while under way.  The author has a knack for keeping the reader continually wondering just what will happen next!  He is able to convey a genuine feeling of what it would be like serving on a submarine under stressful conditions, such as how the Kentucky crew dealt with the emotional aspects of its mission to inflict mass destruction – in effect, Iran and its people would no longer exist after the strike – all the while evading interception.  There are nearly 100 characters that appear in the book, but only 26 are principal figures. The author thoughtfully provides two listings that are a great help to the reader in keeping who’s who straight.  This is a book that will be very hard to put down until you have finished reading it!