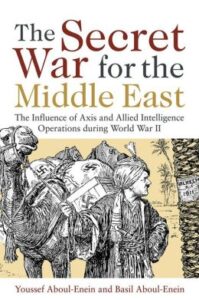 The Secret War for the Middle East: The Influence of Axis and Allied Intelligence Operations during World War II should not be confused with Andrew Rathmell’s Secret War in the Middle East: The Covert Struggle for Syria, 1949-1961, an enlightening and in-depth study of Syrian politics and foreign relations between 1949 and 1961. Rathmell documents previously unstudied aspects of Syrian covert intervention in the 1958 Lebanese Civil War and of a Syrian-Jordanian “dirty war.”

The senior author of The Secret War for the Middle East is Cdr. Youssef H. Aboul-Enein, USN, an officer in the U.S. Navy Medical Service Corps and a Middle East foreign officer. He holds a master’s degree in strategic intelligence from the National Defense Intelligence College and is stationed in the Washington, DC area. Commander Aboul-Enein currently is the adjunct military professor and chair of Islamic studies at the National Defense University’s Dwight D. Eisenhower School for Resource Strategy and National Security. He is also the author of Militant Islamist Ideology: Understanding the Global Threat (Naval Institute Press, 2010) a highly significant volume which clarifies the differences between Islam, Islamist, and Military Islamist, showing how militant Islamist ideology takes fragments of Islamic history and theology and weaves them into a narrow, pseudo-intellectual ideology to justify violence against Muslims and non-Muslims alike.

The co-author of The Secret War for the Middle East is his younger brother, Basil Aboul-Enein, a former captain of the U.S. Air Force, where he held the position of public health commander and medical intelligence officer at Columbus AFB. He obtained a master’s degree in military history through Norwich University and currently teaches at San Jacinto College and East Mississippi Community College. Among the military duties of these two officers was to explain the origins of Arab Nationalist ideologies to U.S. Armed Forces personnel. Their research led to explorations into the efforts of Axis penetration and Allied countermeasures in the Middle East in the pre-war period, World War II, and post-war era. These, in turn, have led to this important, well-researched book. These authors have the background and expertise to prepare this important synthesis.

The pre-World War II British and French domination of the Middle East and North Africa was tailor-made for exploitation by Axis intelligence and propaganda. German and Italian support for the political dogma of Arab Nationalism would contribute to the evolution of Arab socialism, Nasserism, Ba’athism, and components of militant Islamic ideology (p. xiii). Frequently overlooked in studies of World War II, the Middle East was, in reality, a major theater for the Allies. Though the threat of direct Axis invasion by the “Desert Fox,” Field Marshal Irwin Rommel’s Afrika Corps never materialized beyond the Egyptian Western Desert. This did not deter the Axis from probing the Middle East and cultivating potential collaborators and sympathizers. This volume sheds light on the historical parallels and reviews the “forgotten” Axis and Allied intelligence and propaganda beginning prior to World War II and its impact on the post-war world. The book also has 626 scholarly endnotes; a “Selected Bibliography” which includes three archival sources, 20 primary works (books), 158 secondary works (books), 37 articles, four theses and dissertations, and eight Internet sources; and a highly detailed 12-page “Index” conflates topics and proper nouns.

In the first introductory chapter, the authors outline the years leading up to World War II, when Hitler expressed little interests in the Arabs, mainly because the 1936 Hitler-Mussolini Axis agreement left Arab questions in the Italian “sphere of influence.” The authors document how European competition – British, French, Italian, and German – from WWI to WWII shaped the region, as Axis and Allies competed with one another for popular support in the Middle Eastern nations. Some young Arabs saw pro-Axis sympathies as a means to gain independence and nationhood from British and French control. Hence, Axis intelligence efforts fueled anti-British resentments and helped shape the course of Arab nationalist sentiment throughout the Middle East. These actions would leave an indelible mark on the sociopolitical evolution of the modern states of the Middle East. Their effects continue to be felt today.

The primary topics in the lengthy second chapter, “The Palestine Question,” include the Sykes-Picot Agreement, misplaced Arab Nationalism of the 1930s, the rise of Zionism, Italian policies, British political dilemmas, the Arab Revolt of 1936, the Nazi collaborating Grand Mufti, Muslim members of the in the Waffen SS, the Nazi Fifth Column, and the development of Arab Nationalist theory. The authors begin the third chapter, “Hashemite Iraq,” with Ottoman political and military administration since the 1870s, a review the British Mandate, the rise of King Feisal I, the 1920 Revolt, and the 1922 Karbala Conference. From 1921-32, 130 uprisings and revolts were suppressed by Iraqis and the British, but Nazis developed a German-Iraqi arms agreement by 1937, so that the British needed to intervene in 1941 because of enhanced Iraqi-Nazi connections and Arab volunteers in the German Armed Forces. Battles between British and Iraqi forces and Operation Sabine, conflicts between Arab leaders, Nazi miscalculations, and Arabs in Nazi concentration camps are also documented. There is a rather brief chapter on “Vichy French Syria: Operation Exporter,” in which the authors focus on the political situation in the 1920s, Axis manipulation of Syrian governments in the 1940s, and de Gaulle’s plan for the Levant which involved cooperation between Australian, Indian, Free French and Palmach (Israeli) units.

Chapter 5, “Iran: Operation Countenance,” commences with a discussion of British and Soviet involvement in Iran since the 1800s, Iranian “neutrality” and political control by the Pahlavi (1925-77), and Allied military assistance to counter Nazi military aid. The very brief sixth chapter, “Turkey: Balancing Neutrality,” commences with the Turkish view of the Treaty of Versailles, mistrust of the Italians, Turkish “neutrality,” and problems with Vichy-controlled Syria. Especially noteworthy is the ability of Turkey to simultaneously maintain a mutual assistance pact with the British and a nonaggression pact with the Nazis. In Chapter 7, “Axis Efforts in the Arabian Peninsula,” the authors provide an account of the radical political changes in the Arabian Peninsula by the end of World War I, the Anglo-Ottoman Convention of 1913, ultimate Saudi dissatisfaction with the quality and quantity of British Arms received in the 1930s, entreaties to the Nazi’s and success in obtaining for military aid, and Japanese collaboration and trade contact with the Muslim world. There are only a few discussions about Kuwait, Qatar, Bahrain, Oman, and Yemen. Receiving notable attention is the British Royal Air Force airbase established in Aden in 1917, the Italian Royal Navy’s Red Sea Flotilla established in Eritrea in 1940, the battles between British and Italian ships in the Gulf of Aden (23 June 1940), German U-boat activities, and Italian air raids on Haifa and Manama.

Chapter 8, “Afghanistan and the Third Reich: Fomenting Rebellions,” briefly focuses on the reign of Mohammed Zahir Shah (ruled 1933-1973) during World War II. The content of the chapter is based on two journal articles by Milan Hauner (1981 and 1982), which relied heavily on German World War II archival sources. The Aboul-Enein brothers observed common themes (tribes, geography, and personalities) in Afghanistan-Pakistan in pre- and post-World War II and the current problems encountered in this region today. “Egypt’s Internal Struggle: To Declare War or Not?” begins with the Anglo-Egyptian Treaty of 1936, an analysis of the Ali Maher Pasha government, and Egyptian military policy during World War II. The transition from King Fuad I to Farouk I, Italian vs. British and Allied military strength in North Africa in 1940, German and Italian intelligence sources, the compromise of the U.S. Black Code, Egyptian War Minister’s insights, anti-British Egyptian leaders, and Egypt’s financial contributions to Britain during the war are documented. The conclusion provides a review of major points from the previous chapters, and opinions by other scholars. The authors also comment on their recent analysis of captured al-Qaida intelligence and counterintelligence manuals, and conclude with lessons to be learned:

“… before undertaking war, it is vital to know the region, the area of operation, your nation’s place in it, and previous armies that have fought in the area. Get inside the history of the region; walk around between perception, conspiracy, and fact to gain a true understanding of those fighting alongside you, and against you.” (p. 190)

The reader should keep in mind that this volume deals with the influence of Axis and Allied intelligence operations during World War II and not with the history of intelligence and counterintelligence activities. This valuable, insightful, and compelling book exposes, in the main, some facets of the covert war of diplomacy, intrigue, and propaganda and the impact that the Middle East had on the evolution of Arab nationalist movements in the twentieth century and militant Islamist groups in the twenty-first century. The U.S. National Archives and Records Administration and the National Security Archive provide an untapped cornucopia of relevant information of topics that the Aboul-Enein brothers consider in this volume. While coverage among the eight areas considered is uneven in length and detail and varies in chronological reportage of the pre-war, World War II, and post-war periods, there is much valuable information and insight made available to the reader in this regionally comprehensive coverage.

Readers interested in these matters should also consult three additional recently-published works. A Line in the Sand : The Anglo-French Struggle for the Middle East, 1914-1948 by James Barr (W.W. Norton & Co., 2012) which focuses on the British and French clandestine struggle for power in the Middle East. From the Sykes-Picot Agreement of 1916 to divide the region between them to the birth of Israel, this volume illustrates imperialism, with tales of unscrupulous double-dealing, manipulation, and violence that continues into this millennium. In America’s Great Game: The CIA’s Secret Arabists and the Shaping of the Modern Middle East, intelligence historian Hugh Wilford (Basic Books/Perseus Books Group, 2013) details the history of the CIA’s pro-Arab operations in the 1940s and 1950s by examining the careers of three influential U.S. intelligence officers. Lastly, just published is Nazis, Islamists, and the Making of the Modern Middle East by Barry Rubin and Wolfgang G. Schwanitz (Yale University Press, 2014) who consider alliances forged among Nazi leaders, Arab nationalists, and Muslim religious authorities. They draw on recent research in European, American, and Middle East archives in considering Nazism, Islamism, and jihad.

——————————————————————–
A few words about potentially confusing geopolitical terminology: The authors employ the political and cultural term “Middle East” to include the broad geographic region between North Africa (Morocco eastward through Algeria, Tunisia, Libya, and Egypt), and eastern Mediterranean lands through Persia/Iran and Afghanistan, which comprises significant portions of the Arabic- and Persian-speaking world. Technically, western North Africa is, of course, not part of the Middle East. Occasionally, they or their sources, employ the geographic term “Near East” which encompasses the eastern Mediterranean littoral — Turkey, Palestine, Mesopotamia (modern Syria and Iraq ), as well as Persia/Iran. The anthropological-archaeological term “Southwest Asia” connotes basically the same region as the Near East. Afghanistan, India, and Pakistan are portions of “South Asia,” while Afghanistan, particularly the northern portion, and the former Soviet Republics – the “-stans” — are part of Central Asia or what archaeologists now term “Middle Asia.” Hence, the authors’ “Middle East” includes portions of western North Africa and South Asia. A general map would assist the reader; the three maps in the books focus on specific sub-regions and topics.

Dr Kolb is an independent scholar retired from the National Endowment for the Humanities.