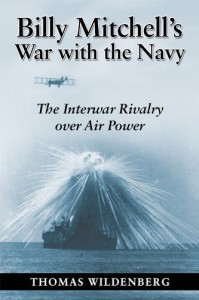 Colonel Billy Mitchell, an iconic and controversial figure in United States aviation history, is the subject of an important new book by independent historian Thomas Wildenberg. Although Mitchell’s life and military service is examined in innumerable books and articles, Billy Mitchell’s War with the Navy presents a new interpretation on the topic. This well-researched monograph assesses Mitchell’s actions and intentions from a naval perspective. Within this narrative, the reader will find a fresh perspective on the fierce competition that erupted between the nascent air arms of both the U.S. Army and the U.S. Navy during the interwar period.

Wildenberg’s expertise in the development of U.S. naval aviation during the interwar period is reflected in this meticulously researched book. The author located previously unused sources found in the Naval History and Heritage Command and Navy Department archives, such as the papers of VAdm. Alfred W. Johnson, USN (Ret.) and an official history of the 1921 Virginia Capes bombing experiments. It was Johnson, then a captain, who commanded the naval forces involved in the famous bombing exercises that culminated in Army bombers sinking several ex-German warships, including the battleship Ostfriesland. Wildenberg provides a detailed and enlightening account of how Navy objectives for the experiments were compromised by the willful violation of exercise parameters by the Army airmen under Mitchell’s command.

The author clearly establishes the limitations that should have been placed on the conclusions drawn from the sinking of immobile target ships whose material condition was compromised. Nonetheless, Mitchell and the air power advocates would successfully use the sensational accounts and images from the bombing exercise to feed a growing consensus among Congress and the public that aircraft now superseded traditional naval power. The narrative gives new insight into the fear and frustration that gripped naval leaders during this time, and how their response to the Army airmen’s aggressive campaign to create an independent air service that could potentially subsume naval aviation.

The book contains ample biographical information on Mitchell’s military career with an appropriate focus on his distinguished contributions to the American Expeditionary Force during World War I, along with his bravery in the air. The author performs the laborious work of verifying with primary historical records the details of previous biographies on Mitchell. Consequently, a number of earlier errors connected with the chronology and context of events and inconsistencies in statements attributed to Mitchell now stand corrected.

An example of Wildenberg’s skill at weaving facts into an engaging narrative is found in the detailed explanation he provides on the mid-1920s shift to coastal defense as a core mission for the newly established Army Air Corps (AAC). Mitchell and others recognized that highlighting the expected efficiency and effectiveness of land-based aircraft in defending the nation’s coasts could ensure a robust budget for the Army’s air arm. The competition between the services over this mission would ultimately lead Mitchell to publicly challenge both the Navy and War Departments and bring about his court-marshal.

In the final chapter, titled “The Verdict of History,” Wildenberg delivers a compelling assessment of the aviation rivalry between the services that Mitchell did so much to foster. By contrasting the performance of carrier-based aircraft at the Battle of Midway against the U.S. Army Air Force’s (USAAF) land-based bombers the author takes aim at the sensational predictions made by Mitchell concerning the vulnerability of surface ships to horizontal bombing. The contrast is a stark one. The victory at Midway hinged upon the deadly effectiveness of the Navy’s Dauntless dive-bombers while the USAAF Flying Fortresses failed to damage a single major Japanese ship. Although the AAC had developed highly effective bombing doctrine for land targets, the lack of rigor in its tactics for attacks against maneuvering ships at sea was exposed early in World War II. The author drives home the point that the false assumptions, which were the underpinnings of high-altitude horizontal bombing against ships, flowed from Mitchell’s earlier advocacy for the coastal defense mission.

Thomas Wildenberg accomplished the challenging task of writing a narrative that will appeal equally to both general readers and informed professionals. The book is supported with meticulous notes, an extensive bibliography, and highly useful appendices. Mitchell’s passion, intelligence, and recklessness clearly emerge from the book’s pages, as does the U.S. naval leadership’s frustration with and animosity towards this high-energy proponent of an independent U.S. Air Force. (728)