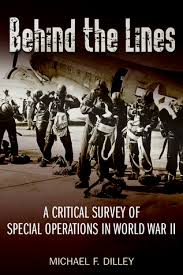 Since the 9/11 attacks, U.S. Special Forces have received a growing amount of media attention. Numerous books describe and analyze their recent operations. Michael F. Dilley, a writer and editor for Behind the Lines magazine, returns to the modern origins of these elite units with their vast proliferation during World War II. Taking a case study approach, he discusses units from a number of countries, both Axis and Allies. The book’s twenty-three chapters discuss missions that span the globe, including raids, intelligence gathering, rescuing POWs, and supporting guerrillas. The author relies mostly on secondary sources, though he did interview participants of a few of the missions.

The book’s chapters are short and generally follow the same format: approximately ten pages describing the mission, the unit that carried it out, and its history and training, followed by several pages of mission analysis and critique. The missions discussed range from the well-known Commando raid that aimed to kill or capture Rommel to Otto Skorzeny’s rescue of Mussolini. He also discusses larger operations, such as the Jedburgh teams that parachuted into occupied France, Belgium, and Holland to train and coordinate anti-Nazi resistance groups.

The majority of units and missions discussed are American or British. Several chapters recount the first missions of particular units, such the first raid by the newly formed Special Air Services in North Africa, of the first combat drop of U.S. paratroopers as part of the Torch landings, and the assault on the Palembang oil refineries by Japanese paratroopers. Two chapters cover an obscure, platoon-sized British unit, Popski’s Private Army, which grew to just over 100 soldiers, which fought in North Africa and Italy. Three chapters detail missions of the Alamo Scouts, created by the U.S. 6th Army in the Pacific. In addition to pre-invasion reconnaissance, they helped conduct two successful POW rescue missions. The multi-national, multi-service scouts who operated with the U.S. 7th Amphibious Fleet also receive a chapter.

While enlivened by some interesting anecdotes, the book’s narrative is sometimes belabored by menial trivia, such as noting the design and designer of each unit’s badge. Many of these missions are interesting, like the early war cross-channel by British troops against a German Wurzburg radar installation, but the author’s analysis tends to emphasize the obvious. Strangely, the book lacks a conclusion with no effort to draw larger lessons by comparing this hodgepodge of missions as a group. Each is assessed individually. Many missions suffered from poor intelligence and planning, and others from poor inter-service cooperation. Surprise was always essential to success. The book would be useful as an introduction to the multiplicity of special forces units that fought in World War II and their varied missions, but those requiring more detailed and analytical accounts must look elsewhere.

Dr. Stephen K. Stein is an Associate Professor at the University of Memphis.