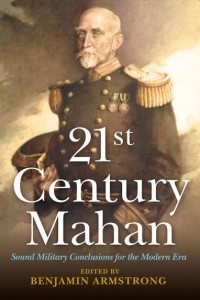 Despite Alfred Thayer Mahan‘s tremendous influence upon naval policy, national security affairs, and international politics during the early 20th century, many people today regard his ideas as curious artifacts of a bygone era.  In his time, Mahan achieved superstar status as a historian, strategist, naval theorist, and political philosopher.   From 1879 through 1913, Mahan published dozens of books and articles. His prolific body of work seems poorly suited to addressing the complex array of issues that confront our 21st century world.   Recent scholars fault Mahan’s methodology as too narrow, or emphasize particular aspects of his thinking as obsolete or inappropriate, notably his interests in battleship technology and territorial expansion.

Military historian Benjamin F. Armstrong enthusiastically challenges these preconceptions in his recent book, 21st Century Mahan: Sound Military Conclusions for the Modern Era.   Armstrong, a notable young scholar and active duty naval officer who writes on military innovation and naval strategy, delivers fresh perspectives on the enduring vision of a past master.   By reexamining Mahan’s writings and ideas in a present-day context, Armstrong proposes to “help return the discussion of Alfred Thayer Mahan to our time, and to point out the importance of his writings and principles when approaching modern-day challenges.” (Armstrong, 2013, 9)

Issues of relevance and readability often hamper efforts to appreciate and apply Mahan’s teachings.  Armstrong begins to address the challenge of relevance by delineating the similarities shared by both Mahan’s world and our own.  Then—as today—impassioned public debate shaped America’s changing role in the world, while revolutionary technological change, social and political unrest, and dynamic national security challenges fueled climates of uncertainty at home and abroad.  Moreover, the implications of rising Asian powers and an imperative to revamp U.S. military policy seemed just as urgent to Mahan and his contemporaries as they do to 21st century policy makers.

Building upon this contextual framework, the author employs Mahan’s own words to highlight the modern applications of his thinking.  Armstrong organizes the book into five chapters, each featuring an essay by Mahan specifically chosen to address modern themes and issues.  Armstrong delivers this package in a concise 176 pages.   Each chapter averages about 30 pages, a length that allows a busy reader to cover its contents in a single sitting.

The educational themes expressed in Chapter Three seem especially important in light of current policy debates.   In response to the technological foment and uncertain international politics of his day, Mahan suggested that balanced, holistic curricula would best meet the educational and training needs of naval personnel at all levels. His prescriptions included appropriate emphasis on both humanities and current STEM subjects (science, technology, engineering, and mathematics).  In addition, Mahan believed the navy should offer advanced education in both the art and science of leadership and strategy.  Following chapters develop Mahan’s ideas on combat command and leadership and the value of historical knowledge and methods in addressing contemporary problems.

As Mahan himself admitted, his dense, convoluted writing style often impedes the understanding of his ideas.  Most readers attempting to fathom Mahan’s deeper meanings soon bog down in his esoteric prose and ultimately give up in frustration.  To rectify this shortcoming, Armstrong carefully selected each featured essay for brevity and readability from articles Mahan published in popular magazines, rather than from his larger and more abstruse volumes.

Armstrong succeeds in achieving his goal of making Mahan’s ideas accessible and relevant.  In the process, he compellingly challenges the conventional interpretations of Mahan’s works.  Instead of an fossilized relic, 21st Century Mahan reveals its protagonist as a perceptive, flexible, innovative thinker.   While Mahan did champion the battleship as the navy’s strategic cornerstone, he envisioned it as the locus of an adaptive, balanced force designed to confront a dynamic world situation.  On the level of policy, Mahan explored the linkages between national economic aspirations and potential international conflict.  Armstrong also shows how Mahan recognized both the promise and peril of globalization.  Military policy, Mahan believed, must remain closely attuned to worldwide economic and political conditions.  Finally, Mahan advocated an honest assessment of potential threat risks to fundamentally inform national debates on policy, strategy, and defense budgets.

21st Century Mahan is a “must-read” for today’s military and naval professionals.  Students of public policy and history (military, political, and diplomatic) will find Armstrong’s work especially enlightening.  The book also lends itself well to use in the college classroom.

Captain Mobley is completing his dissertation at the University of Wisconsin—Madison.