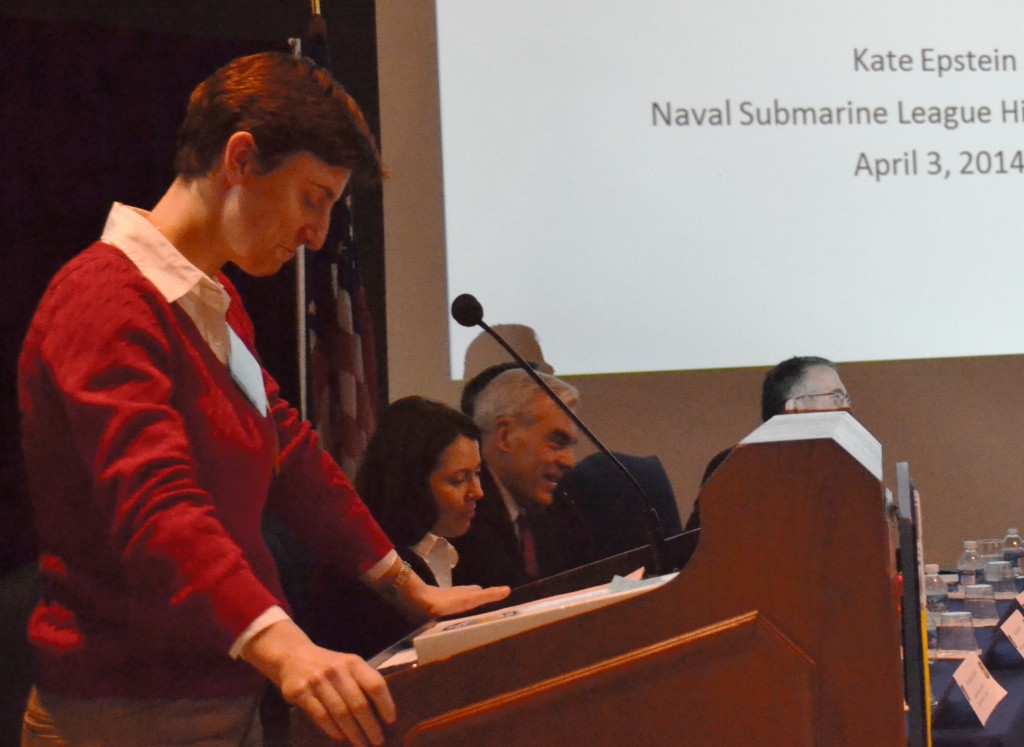 “I’m really delighted to be here with an audience that I don’t have to apologize to for being interested in torpedo history” – Dr. Katherine Epstein at the 2014 Submarine History Seminar

In the years since the first Submarine History Seminar was held at the Smithsonian National Museum of American History during the Submarine Force Centennial in 2010, enthusiasts of undersea warfare have learned a great deal about the history and memory of the submarine service. Everything from the legacy of leaders like Admiral Hyman Rickover and Captain Edward Beach to the vessels that changed the course of history like Nautilus and Seawolf have been discussed and thoroughly analyzed by some of the most distinguished and qualified experts on submarine warfare and submarine history. The seminar is generally scheduled in April so that the Submarine Force 11 April birthday can be celebrated during the event.

This year’s seminar held last Thursday was no different. The theme of the evening’s event was “A Century of United States Navy Torpedo Development.” Seminar speakers represented the current leaders and recognized historians on the subject from the Navy, industry, and academia. Approximately seventy guests enjoyed a night of information, birthday celebration, and commemoration. The 3 April event marked the second seminar held in the Cold War Gallery of the National Museum of the United States Navy at the Washington Navy Yard. Previous seminars were held at the Navy Memorial in downtown DC and the National War College in Southwest Washington, DC. 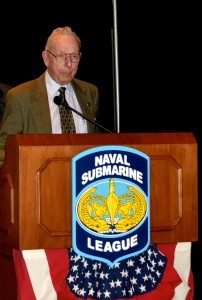 This year’s seminar recognized the accomplishments of longtime chair and moderator, Rear Admiral William J. Holland, Jr., USN (Ret.). The seminar ran under his tutelage since the Naval Historical Foundation joined as a co-sponsor with the Naval Submarine League in 2002.  Over a decade of successful seminars later, Admiral Holland passed the reins to author, analyst, historian, and retired Reserve intelligence Captain, Dr. David A. Rosenberg, USN (Ret.). Rear Admiral Holland’s history of the Submarine History Seminar can be found in the latest issue of Pull Together. 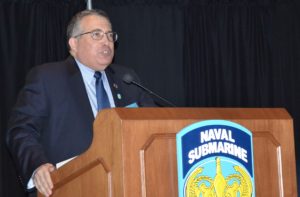 Although the subject matter varied among the presenters, the central theme remained the same. Each brief highlighted the complex and often misunderstood nature of torpedoes and their critical influence in United States Navy history.  It could be argued that torpedoes helped develop the United States Navy, and not the other way around.  The variety of topics discussed during the evening made for a well-rounded seminar. Dr. Rosenberg’s first effort was well-received by attendees. BZ to you, Dr. Rosenberg.

The following is a brief summary of each of the four speakers at the 2014 Submarine History Seminar: 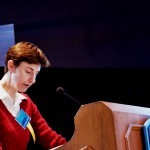 Rutgers University-Camden professor Dr. Katherine C. Epstein is the first person to admit that her love of torpedoes is not always popular amongst her colleagues. “It doesn’t always seem like an obvious choice of subject,” she laughed in the introduction of her talk. Dr. Epstein provided a fascinating discussion on the technical, tactical, and operational impact of U.S. Navy torpedoes.  Specifically, she focused on the developmental rivalry between the British and American navies prior to the First World War.

Her central thesis (included in her recent book, Torpedo: Inventing the Military-Industrial Complex in the United States and Great Britain, Harvard University Press, 2013) alters many common-held perceptions about the history and development of naval warfare during the time period. She argued that “we know far less than we think we do about pre-WWI U.S. naval history. The era was far more complex and far more interesting than we tend to think.” She went on to discuss how officers and officials at the time had a slew of difficult decisions about the complex machinery and mechanisms of the naval torpedo. This was likely due to the narrow scope of naval combat using the weapon and the sophisticated nature of the projectile itself.

Torpedoes were complex pieces of machinery, even by late 19th century-early 20th century standards. She noted how a guidance system for the Whitehead Torpedo gyroscope had over 500 separate parts, an astounding number of intricate pieces for the time period.  Even major policymakers like Admiral William Sims could not completely grasp the technology. According to Sims, torpedoes were “capable of great improvement [. . .] far in advance of the personnel.” More often than not, experts underestimated target ranges and the capabilities of the torpedo director, causing a rift in valuable data necessary to move forward in development.  As suggested in her conclusion:

“If a single weapon system could cause that much uncertainly about the future of naval warfare, there is probably a lot more uncertainty that the standard account of U.S. naval history in the pre-war period has overlooked.” 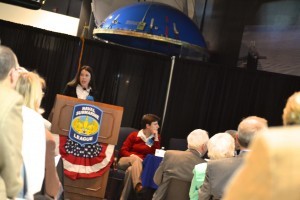 Naval History and Heritage Command (NHHC) Senior Conservator & Laboratory Manager Kate Morrand sought to answer some questions about the nature of early torpedo development in her discussion of the discovery and recovery of one of the Navy’s earliest underwater weapons, the Howell Mark I Torpedo.

After a brief explanation of the management, research, and outreach initiatives currently conducted by the NHHC Underwater Archaeology branch, Ms. Morrand talked about the recent discovery of Howell No. 24 torpedo off the coast of San Diego.  Interestingly enough, the Howell’s main competitor was the Whitehead Torpedo mentioned in Dr. Epstein’s discussion.  The No. 24 torpedo was found by Navy-trained Marine Mammal Program dolphins in March 2013 during a series of training exercises.  After it was recovered and taken to their lab at the Washington Navy Yard, Morrand discussed how she and the Underwater Archaeology Branch began to piece together parts of the mystery behind the artifact.  Relying heavily on a 1896 torpedo manual, NHHC archaeologists were able to use archives in the DC area to pinpoint which ships used Howell torpedoes on the West Coast at the turn of the century.  They found an interesting snippet written in the logbook of battleship USS Iowa, stating how they lost the No. 24 torpedo in training. The revelation gave direct evidence to the torpedoe’s fate. Morrand mused that she wanted to “give a great big hug” to the Ensign responsible for writing the note in the Iowa’s logbook.

The recovered torpedo is one of three left in existence, all within the NHHC Enterprise (one is at the Naval Undersea Museum and the other is at the Naval War College Museum). Work on torpedo No. 24 is still being conducted by the NHHC team here in the Washington, D.C. conservation lab. Stay tuned for further developments!

Penn State University Applied Research Laboratory Director Dr. Edward Liszka brought the discussion of torpedoes back to the underwater realm with his overview of progress made in the field of modern torpedo development.  Dr. Liszka discussed the beginning of development with the MK 24 FIDO torpedo used extensively during the Second World War. He then moved away from passive acoustic models and into the modern age with news on today’s most recent technologies in the field of applied research and military technology.  Dr. Rosenberg commented how such technology will “take legions of historians to work through” in the out years. Many of these disciplines used in such development, Liszka argued, are “pushing the state of the art.” Torpedoes are now smarter, lighter, and possess better strike capabilities through repeated test and evaluation. According to Liszka, the continually challenging undersea environment helps drive the free-flow of innovation and solutions for future adaptability.  Dr. Liszka can only point to future success in the development of underwater warfare technology. Either way, torpedoes have “come a long way since FIDO.” 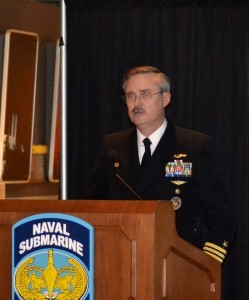 Captain David Ogburn, USN
“The Current and Future Development of Torpedoes in the U.S. Navy”

Captain David Ogburn, USN, Program Manager for Undersea Weapons (PMS 404), focused much of his presentation on the U.S. Navy’s ongoing developments of torpedoes.  Captain Ogburn detailed how the Navy is both meeting the challenges of today and preparing in multiple dimensions for the challenges of tomorrow. His current position makes him the central manager for “all things torpedo” in the U.S. Navy.

Much of his discussion touched on the current state of torpedo development and the projected future of undersea warfare in the upcoming years. Ogburn has no illusion about the challenges he faces as Undersea Weapons Program Manager.  He admitted to the audience that torpedo systems are “the most challenging of any weapon system in the world.”  The range of issues that have to go smoothly to make a torpedo successful is truly mind-boggling.

Captain Ogburn does a great job managing the current inventory of Mod 6 and Mod 7 CBASS (Common Broadband Advanced Sonar System) torpedoes with the future projection of creating HAAWC (High Altitude Anti-Submarine Warfare Weapons Capability) lightweight torpedoes. HAAWC torpedoes will have the capability to be launched by aircraft from altitudes as high as 25,000 feet. Despite these advancements, the U.S. Navy has not produced a heavy weight torpedo since 1997.  He is working hard to make the most cost-effective weapons for industry when MK 48 torpedo production is reopened in 2016.

Captain Ogburn joked that the extensive use of acronyms and abbreviations is as confusing as the torpedoes themselves. “We use acronyms so much,” he laughed, “that sometimes when you sit down and try to remember what the actual letters mean it’s difficult.” 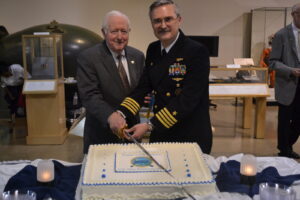 ——————————————————–
A special thanks to Captain Tim Oliver, USN (Ret.) and the rest of the Naval Submarine League for helping put on this event.  Thanks to the event’s sponsor, Northrup Grumman.  We are looking forward to next year!