(Editor’s note: This is the 27th a series of blogs by Norman Polmar—author, analyst, and consultant specializing in the naval, aviation, and intelligence fields. Follow the full series here. Mr. Polmar is now traveling abroad and the series will resume this summer.) 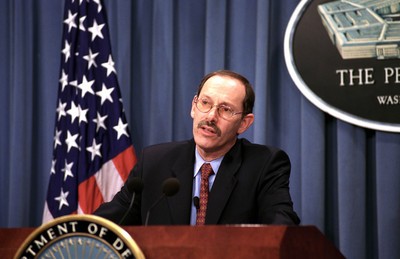 On an afternoon in late 1975 I received a telephone call from a young man identifying himself as an analyst at the Congressional Budget Office (CBO). He said that his boss—Robin Pirie—had suggested that he contact me “to learn about naval issues.”

I had known Robin for several years. He had retired from the Navy after precisely 20 years of service. A submariner, he had commanded the nuclear-propelled attack submarine Skipjack (SSN 585). He later held positions in the Department of Defense and the Navy, serving as Under Secretary and Acting Secretary of the Navy.

The analyst—Dov Zakheim—and I met for lunch at the Marriott Twin Bridges Hotel in Arlington. (The hotel was demolished decades ago.) We talked about the Navy—its problems and its opportunities in the post-Vietnam era. We “hit it off” and in the coming years became close friends.

He left CBO in 1977 and held a succession of posts in the Department of Defense. From 1985 to 1987 he was Deputy Under Secretary of Defense for Planning and Resources under Dr. Fred Iklé, being active in the DOD strategic planning and programming, and the budget process.

In early 1981, Dov and former Under Secretary of the Navy James Woolsey met with Secretary of the Navy-designate John Lehman to propose me for a senior position in the Navy Department —without my knowledge. Subsequently Lehman offered me a position, but I could not accept (see blog “Working for John Lehman”). In 1982 both Dov and I were invited by Secretary Lehman to serve on his committee looking at the lessons of the Falklands conflict.

Also, in early 1984, for Secretary Iklé, I accompanied Dov on a trip to the island of Antigua where the United States had a naval facility or “navfac”—a center for the SOSUS seafloor acoustic detection system. The Navy was planning to close the facility while the State Department wanted to maintain a U.S. presence on the island. We came up with proposals to meet both goals. (Subsequently, my family and I have returned to the island several times—a beautiful and interesting Caribbean hideaway.)

During that period the U.S. government decided to withdrawn funding for the Israeli development of the Lavi fighter aircraft. Dov had a key role in this most controversial decision, and he was savagely attacked by some Israeli politicians and American supporters of Israel.

Dov recorded the debates and decision in his well-written book Flight of the Lavi, published in 1996. A review of the book by Patrick Clawson in the Middle East Review (September 1997) explained: “Zakheim led a successful Pentagon effort to kill an Israeli plan to build the Lavi, an advanced fighter aircraft. The Lavi made some sense in its original conception, as a low-technology inexpensive ground attack plane with a U.S. engine. But it then evolved into a high-technology plane requiring advanced U.S. technology. The cost became prohibitive, and it required extraordinary concessions, such as Washington’s permission for Israel to market the plane to third countries in direct competition with U.S.-built fighters. In the end, Israel could get more planes cheaper by buying U.S.-built fighters, and so killed the Lavi.”

Dov and Dr. Iklé also had me undertake a review of the Navy’s SSN 21 nuclear-propelled submarine program (later named Seawolf). My analysis, completed in 1985, was controversial as I highlighted the problems with the SSN 21 program. Subsequently the government cancelled the SSN 21 program with only three submarines of that design being constructed.

Leaving the government in 1987, Dov joined the Systems Planning Corporation, a technology and analysis firm. He became a corporate vice president and chief executive officer of its subsidiary SPC International Corporation. While with the firm he was involved with project for several foreign nations, especially in the Middle East.

He returned to the Department of Defense in early 2001 as Under Secretary of Defense (Comptroller) and Chief Financial Officer—the No. 4 position in the department. In that position Dov managed the world’s largest departmental budget with a staff numbering some 50,000 men and women around the world. He additionally was the Department of Defense coordinator for civilian programs in Afghanistan from 2002 to 2004. (This last experience led Dov to write the book A Vulcan’s Tale: How the Bush Administration Mismanaged the Reconstruction of Afghanistan, published in 2011.)

Dov served as Under Secretary of Defense until April 2004. While he was in that position on a regular basis I would ask him for a favor, always the same favor: At the southern side of the Pentagon are two large, concrete stair cases leading down to the south parking area. Between the stairs and the Pentagon itself are concrete walks a couple of hundred feet long. When it rained or snowed the stairs and walks—although regularly swept of snow—were messy and at times slippery. They were used by a couple of thousand people every day. I implored Dov to have an overhead covering made, even removable in summer, to give some protection from the elements. It was my only request of him while he was under secretary. He could not get the bureaucracy to make it happen!

Despite this situation, we stayed good friends, often going out socially, celebrating holidays together, and a few times my daughter sat for his three sons when they were young kids.
Today Dov and his wife travel, enjoy a second home in New England, and spend time with their children and grandchildren. Of course, Dov cannot slow down. He consults to the Center for Naval Analyses, sits on several corporate boards, writes two political blogs, regularly has articles published in major newspaper and journals, gives lectures… and periodically has lunch with me.