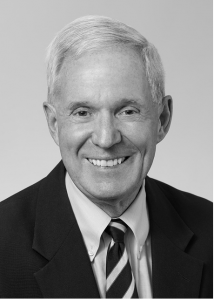 Dipping the flag can be traced back to 1293; but, it was not until the reign of Edward III of England that it gained significance as an enforcement of his claims to the sovereignty of the seas and “jurisdiction over offences committed thereon” as England claimed dominion over the Narrow Seas of the English Channel.  At it worse, this practice could lead to war, as was the occasion with the first Anglo-Dutch War of the seventeenth century.  Over time, dipping the flag became a gesture of intended friendship and a way of saluting by armed vessels.

The 2014 Oxford Naval History Conference entitled Strategy and the Sea:  An International Conference in Honour of Professor John B. Hattendorf, took place at the College of All Souls of the Faithful Departed, a fifteenth-century war memorial that is commonly known as All Souls College, Oxford, during 10-12 April, was, metaphorically, such a salute, given by friends and colleagues.   It was a well-attended event with sixty participants from ten different countries, all gathering to celebrate the contributions made to the field of Maritime History by Professor John Hattendorf.

John B. Hattendorf is the Ernest J. King Professor of Maritime History at the U.S. Naval War College, Newport, Rhode Island, a position he has now held for thirty years, since 1984.  He did his undergraduate work at Kenyon College prior to joining the Navy in 1964. He began his long association with Newport, Rhode Island, while earning his commission through the Officer Candidate Program.  In uniform, he served in USS O’Brien (DD 725), USS Purdy (DD 734), and USS Fiske (DD 842), as well as the Navy’s historical office.  While in USS Purdy, he attended Brown University, earning his Master of Arts (History).  His last active duty assignment in the Navy proved momentous as he was assigned as research assistant and speech writer to the President, Naval War College, then-Vice Admiral Stansfield Turner, the thirty-seventh president of the Naval War College, and served additionally as an instructor in the Department of Strategy.

Admiral Turner had been one of the navy’s first Rhodes Scholars at Oxford University, where he earned a degree in 1950. Recognizing the potential of his young speech writer, Turner encouraged Hattendorf to complete his studies at Oxford’s Pembroke College and this ultimately led to receiving his Doctor of Philosophy (Modern History) from University of Oxford.

The anchors for the conference are giants in the field of naval history.  Paul Kennedy, the J. Richardson Dilworth Professor of History at Yale; Nicholas Rodger, Senior Research Fellow at All Souls College, Oxford, and Roger Knight, Greenwich Maritime Institute at the University of Greenwich, all long-time friends  who commented on knowing John Hattendorf for “nearly 40 years”.  They spoke of the range and breadth of Hattendorf’s contributions to the field.  Others paid tribute to Hattendorf’s assistance and encouragement for their own studies and research. Among the other prominent figures who spoke were Olivier Chaline of the University of Paris-Sorbonne; J. R. Bruijn of Leiden University; Andrew Lambert of the University of London; Zisis Fotakis of the Hellenic Naval Academy; Captain Dr Werner Rahn of the German Navy; Rear Admiral James Goldrick of the Royal Australian Navy, and Captain Keizo Kitagawa, the Japanese defence attaché in London.

The conference showed the range of thought associated with the topic; yet, the most impressive aspect witnessed throughout the various presentations was the depth of the field of study.   In all, there were eighteen papers and three keynote lectures given.   (For a view of the schedule, go to www.oxfordnavalconference.co.uk/#!schedule/c1yi7.)

The international aspect of the conference spoke to how the maritime environment binds all countries and how Hattendorf’s influence goes far beyond Newport.  Most encouraging was the youthfulness of the conference and how there are many young researchers doing original research.  The field is alive and growing, thanks to individuals such as Professor John Hattendorf who has devoted his life to the furtherance of maritime history.