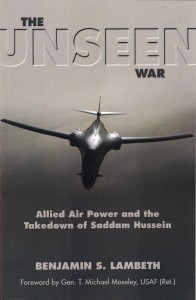 Ben Lambeth of the RAND Corporation is one of the premier historians of operational air power. His account of the air campaign that supported the overthrow of Saddam Hussein during Operation Iraqi Freedom the spring of 2003, The Unseen War, does nothing to diminish his reputation.  He is a master of the complexity of modern air power as evidenced in his earlier study of Operation Allied Force, NATO’s Air War for Kosovo: A Strategic and Operational Assessment (RAND, 2001).  Like that book, this is a published version of his work for RAND.   His thesis is clear and up front: “…the three weeks of major combat that ended Hussein’s rule are a case-book example of successful joint and combined warfare at the operational and tactical levels…”(3). He adds the extremely important caveat, “…the [Bush] administration’s colossal strategic error of failing to understand that providing sufficient forces to ensure a stable and secure postwar Iraq was an essential ingredient of any effective coalition campaign plan, a failure that led to manifold and cascading unanticipated consequences.”

A second major argument of the book is reflected in its title, which comes from his claim that the air power aspect of the United States’ war in Iraq in 2003 has been all but forgotten, and therefore can be categorized as an “unseen war.”   He further claims this story has been untold for a variety of reasons by the histories produced so far, for example Cobra II by Bernard Trainor and Michael Gordon (2006), as well as by the American public.  These reasons include:  embedded reporters who served mostly with ground units, the difficulty of getting the “air power story” to the American public, and that the histories of the first conventional phase of the war tended to exclusively cover the ground war and slight the air war.   He is generally correct on all these complaints. Thus, this book fills a gap in the already voluminous literature on this conflict.

This book’s main strengths lay in its detailed discussions of the operational planning and execution by the air component during its missions in Operation Iraqi Freedom.  As such, it is organized into five very lengthy chapters and a short final chapter six that restates his conclusions.  The chapters, in turn, address “the road to war,” (1) the actual air operations to support Iraqi Freedom, (2) how the Allied air components contributed, (3) “key accomplishments,” and (4) a chapter that discusses problems with (5) air-ground operations. This detailed approach is also the book’s greatest weakness.  While it does “drill down” (to use a phrase that Lambeth uses often in his writing) to tactical activities on many occasions, it does not do nearly as good a job at linking the operational level of the air war to the larger strategic context and vice versa. His tone of triumphalism about the validation of “jointness” that this campaign highlights obscures the underlying truth of an overrated threat and a failure to think beyond a list of targets.

Among the most fascinating discussions in the book are those that surround two issues, one known and the other relatively obscure.  The first relates to high visibility characterization of the opening air campaign as “shock and awe.”   This phrase actually comes from a study produced in the 1990s under the aegis of the National Defense University.  However, as Lambeth rightly points out, the Central Command (CENTCOM) air planners for the war did not use this plan as their template for what was termed a “concurrent start” (74) with air and ground operations beginning essentially at the same time.  Instead, in talking to various planners, Lambeth finds that it came out of the Office of the Secretary of Defense and reflected a desire for the entire operation to use fewer forces and “more ‘light, lean, speed, and agility.’” (322n102) The press then picked this phrase up and used it to mischaracterize the opening phase of the war, when actually much more flying was going on outside Baghdad to “shape the battlefield” for General Tommy Franks’ ground forces.

The second fascinating story, found in chapters 1 and 2, involves the conduct of Operation Southern Focus, whereby the Air Force used the ongoing no-fly zone Operation Southern Watch as a cover to strike Iraqi air defense targets and command and controls nodes.  This was done to accomplish what is called suppression of enemy air defense (SEAD) more than eight months prior to the official initiation of hostilities in March 2003 (61). This campaign was among the more successful precursor operations in air power history, and enabled the air component commander General T.M. Moseley to agree to the plan to start the overt ground and air wars on the same day.  Unfortunately, the account does not say much about how this campaign was perceived and reacted to on the Iraqi side of the fence—which is a general weakness throughout the book.

Another shortcoming in the book is its often uncritical approach to the lessons learned from the campaign.  Given that the thesis revolves around how much of a success story the joint application of air power was during this relatively short campaign (if Southern Focus is excluded), this should not surprise the reader.  In chapter 5 “Problems Encountered,” there is no single problem identified that criticizes air power systemically or systematically.  Three of the problem areas—fratricide (244), the Army Apache helicopter deep attack (251), and “Inefficiencies in controlling the Joint Battlespace by V Corps” (255)—are really criticisms of the Army.  Another section lauding Marine conduct of joint air operations is just another critique of the Army.  The remaining criticisms are really overall systemic criticisms of joint command and control, bomb-damage assessment (by intelligence folks) and the air-refueling tanker shortage.  The tanker shortage critique is not really directed at the air component commander, or the Air Force, but rather an apology in the classical sense, an explanation for why tanking didn’t always work out and why the other services need to factor the shortage of Air Force tanking assets into their planning.  A final problem area identified had to do with sharing information with coalition partners and, again, is not really directed at the air component staff and leaders but at higher echelons and decision-makers regarding the dissemination of classified information to non-US forces.

Lambeth constantly emphasizes the care with which the air campaign tried to avoid collateral damage to infrastructure and civilian non-combatants.  “Every effort was made…to avoid the destruction of infrastructure that would be essential to postwar reconstruction” (114).   Comments like this cause one to wonder why there was no similar care employed in actually planning for a postwar reconstruction and occupation?  Nonetheless, readers looking for a comprehensive description of our nation’s last conventional air campaign will be rewarded by this study.  If they are looking for more about air operations in Iraq after the fall of Saddam Hussein in 2003, they will need to search elsewhere.  Lambeth’s work here, however, will remain the authoritative source for this unique air campaign for some time and is highly recommended for military professionals of all stripes to read critically

Dr. Kuehn, a retired Navy Commander is the General William A. Stofft Professor of Military History at the U.S. Army Command and General Staff College.  He is the author of Agents of Innovation (2008), co-author of Eyewitness Pacific Theater (2008), and the winner of a 2011 Moncado Prize from the Society of Military History.