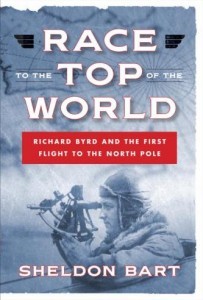 Race to the Top of the World: Richard Byrd and the First Flight to the North Pole
By Sheldon Bart, Regnery History, Washington, DC (2013)

Race to the Top of the World, by Sheldon Bart, not only opens again the question if Richard E. Byrd reached the North Pole on May 9, 1926, but provides an extremely detailed account of the events that led to Byrd’s attempt to reach the North Pole by plane and most importantly explains the various innovations in the field of navigation required for beginning such an endeavor.

Author Sheldon Bart is a writer-explorer who led the 1996 American Expedition to Baffin Island. He is also a member of the Board of Governors of the American Polar Society and has published fiction and non-fiction books. Thus, it should be expected that the book is not only well researched, but also fulfills the criteria of a scholarly historical publication. While it is obvious that Bart has done research and unearthed a number of details that might help end the controversy about Byrd’s attempt to reach the North Pole in 1926. Unfortunately the book does not entirely fulfill the traditional standards of a historical publication. In particular, the book is widely under-referenced. The reader often feels left alone when it comes to the question where Bart received specific details of the story that can by no means be considered common knowledge. Given that Bart provides the history of Byrd’s flight to the North Pole mainly as a gripping and fast-paced story full of details and not as a dry historical analysis, it should be assumed that he was looking for a broad readership with an interest in aviation and polar history than providing a book to be discussed in the small circles of (professional/academic) historians dealing with the history of polar aviation. Thus, the critique on Bart’s book as being under-referenced might be important for polar-historians like the reviewer, but to a certain degree irrelevant for most other readers, especially if there is no specific reason to question the reliability of Bart’s research.

While the Byrd/Amundsen controversy on who reached the North Pole first via through the might be less known than the Peary/Cook sledge over ice controversy, it is, in many aspects, a much more colorful and important story. It is not only a story about exploration of the most northern point of the globe, but about the use of aircraft in Polar Regions and for scientific purposes at large. Thus Bart deserves without any doubt praise for bringing the Byrd/Amundsen controversy to the public. The book served this purpose well. Furthermore, the book needs to be praised for clearly showing that flying to the North Pole was a complex endeavor that involved not only the flight itself, but substantial improvements in aircraft technology and a number of complete new innovations in areas like aerial navigation. By providing these side-stories, Bart manages successfully to explain that the relevance of exploration is not limited to the field of (polar) geography, but that even everyday life has indirectly benefitted from such exploration ventures (think about the improvements in aerial navigation and the development of trans-continental air-traffic).

Therefore, the book needs to be recommended to anybody with an interest in the history of polar-regions or the history of flight. It also needs to be mentioned that the book is not the ultimate scholarly answer on the Byrd/Amundsen controversy and hardly the standard reference for the history of polar flight. If the reader is looking for a well-written and entertaining new take on the controversy that brings a number of new materials to the discussion, this book will be a welcome addition to the bookshelf. The work is based on a traditional ‘Great-Men’ approach, sometimes using a casual or laid-back style that might be critical for a real historical analysis. For Bart’s book, it is definitely working, even if one may question if the reader really needs to know that the favorite dish of Fokker, the manufacturer of the airplane used by Byrd, was ice-cream.

In the end, Bart’s work has the qualities for a page-turner. Even if the Byrd/Amundsen controversy remains unsettled with this book, it is an important contribution to the discussion, if only by making the controversy known to a broad audience that would never engage in reading a scholarly article on a topic published in a renowned but largely unknown scholarly/scientific journal.