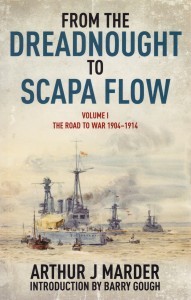 Of the first of five volumes that compose Dreadnought to Scapa Flow, this review addresses Volume I, titled “the Road to War 1904-1914.” These books, which address the naval affairs in World War I, were first published in the 1960’s.  Each weighs in at around 450 pages. The set is roughly analogous to Samuel Eliot Morison’s 15-volume History of United States Naval Operations in World War II. One important distinction, however, is that Morison spent much of his war at sea. Marder still ran about in knickers at the age of nine when the Great War ended. Sea time further eluded him during the Second World War when he attempted, unsuccessfully, to join the Royal Navy, the American Navy, and the Canadian Navy.

For the British, 2014 is the centennial of their entry into the Great War. Sentimental anglophiles might find this anniversary reason enough to read Volume 1. I did. However a more pragmatic reason might be to mine some lessons which might be applicable to a scenario such as:  The undisputed world naval power finds itself under increasing budgetary pressures while simultaneously facing a possible challenge to its hegemony for the first time in many decades. Subsequently it pivots its Navy to the waters off the challenger’s coast.

Adm. Jacky Fisher developed several major reforms that he intended to implement early in his tour as the First Sea Lord in 1904.

Selborne Scheme: This reform actually commenced while Fisher served as Second Sea Lord. At its crux was the common accession and indoctrination of executive, engineering, and marine officers, which would extend over four or five years until age 22. Thus the Royal Navy in this instance somewhat aligned with the American Navy’s practices in Annapolis during the second half of the 19th century. Professionalizing fleet gunnery training and improving conditions on the lower decks were also related to this reform.

H.M.S. Dreadnought: At the time of its commissioning in 1906, Dreadnought was to the naval calendar what B.C. and A.D. were to the Christian calendar. All battleships at sea, regardless of navy, were lumped together as obsolete ‘pre-Dreadnoughts.’ Fisher was of the correct opinion that secondary batteries were of little consequence in a fleet engagement. What mattered were a longer range main battery, accurate fire control, and speed advantage. The advent of the aeroplane as an effective offensive weapon changed this priority three decades later.

The next three reforms were very much interdependent.

Nucleus-crew System: The Fleet Reserve was reorganized and renamed the ‘Reserve Fleet.’ Each reserve ship was manned at 40% of complement including representatives of each specialty rating and key officers. The crews lived onboard and took practice cruises. In the event of mobilization, the shore establishment would be tapped to augment the crews.

Scrapping of Obsolete Men-of-War: Adm. Fisher recalled and decommissioned obsolete warships from across the empire. Mass decommissionings reduced the global presence of the Royal Navy but provided crews for new dreadnoughts and the Reserve Fleet. This struck the reviewer as reminiscent of the retirement of the Sumner and Gearing class destroyers, the Guppy submarines, and Essex class carriers in the 1970’s.

Redistribution of the Fleet: With the decommissioning of hordes of colonial cruisers, the Royal Navy pivoted from imperial handmaiden to master of the Channel and North Sea. The Channel and Nore fleets, as well as the nucleus crew vessels, came under the Home Fleet. Germany’s Grand Fleet in Kiel and Wilhelmshaven became the focus of the Royal Navy.

Each reform had its opponents. As Marder summarized, “Valuing tradition and custom at too high a price, many naval officers, the majority of which were on the retired list, seemed constitutionally opposed to change. What was good enough for their grandfathers was good enough for them, and any variation meant that the Navy was going to the dogs.”

One of the subplots of longstanding interest to naval historians was the prolonged feud between Adm. Lord Beresford and Adm. Lord Fisher. Marder’s index shows about 50 page numbers under ‘Beresford’. The 569 page Memoirs of Admiral Lord Charles Beresford by ‘Himself’ list two entries for Fisher. A hint of disdain?

The first half of Part II, ‘Prelude to War, 1910-1914,’ seemed harder to follow as it focused on the political machinations of the Whitehall, the Foreign Office, and Parliament. These chapters held my interest with the same riveting affect as the squabbling over the ‘Sequester’ in 2013. Although historically important, it was a bit of a slog.

Quarrels between the activist First Lord Churchill and the uniformed Sea Lords perked up the prose. It sometimes brought to mind Secretary McNamara’s alleged activism during the Cuban blockade and the TFX acquisition.  Marder sums up these years with, “The Churchill period […] noteworthy for more than naval reforms, big dreadnought programmes, and futile negotiations with Germany. There were important developments in strategy in these years.” Two defensive strategies (“The Invasion Bogey” and “The Guerre De Course Bogey”) as well as three offensive strategies (“Fleet actions and blockade,” “Commerce Warfare,” and “Combined operations”) were also reviewed. Finally, Marder provides a baseline comparison of the British and German navies in 1914.

The Fisher and Churchill reforms took time to settle out. They remain a backdrop to the international politics between London and Berlin during the buildup to Armageddon.  Of course there is little suspense at the end of Vol. I. As we all know, ‘things did not end well.’

This book and the next four volumes are classics in naval history and deservedly so. A slightly shorter alternative source on the build up to and conduct of the Great War would be Robert K. Massie’s Dreadnought and Castles of Steel.

Price will review Marder’s second volume of Dreadnought to Scapa Flow: The War Years: To The Eve  of Jutland 1914-1916 later in 2014. His manuscript for a historic novel, Tattered Ensign, set in Samoa in 1889, is in review with a publisher. He has started writing the sequel also set in the Pacific initially but ending at the 1893 Columbian Exposition in Chicago.