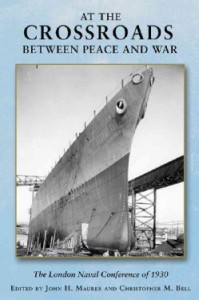 At the Crossroads Between Peace and War:  The London Naval Conference of 1930
By John H. Maurer and Christopher M. Bell, Eds., Naval Institute Press, Annapolis, MD. (2014)

The naval conference that met in London from January to April 1930 is instructive to the modern observer for the light it shines on the difficulty of securing agreement in multi-party talks where the fundamental issue at hand is merely part of a broader problem. If naval limitation had been the only consideration, then doubtless a formula for success satisfying all parties might have been devised in 1930. Yet, each of the principals retained other desiderata which operated at variance to the putative objective with security, prestige and equality of standing being merely three. Given such divergences, it is to be wondered agreement of any kind followed. The balanced essays appearing in At the Crossroads recount the conference from the perspective of each of the protagonists. Each essayist manages to say something new about something old. Johns Ferris and Kuehn do so perhaps explicitly, tying the conference to key sub-genres of historiography, with all relating their portion of the story displaying scholarship and finesse.

The agreement reached saw the United States, Britain, and Japan scrap a number of over-aged capital ships, extend the moratorium on new heavy ship construction, and clarified the previous definition of what constituted an aircraft carrier. The Washington ratio system now encompassed cruisers and destroyers with parity in submarines granted to all. At an earlier, failed conference in Geneva in 1927, France and Italy had not even participated. Thus, their inability to reach agreement in London did not detract from the broader contemporary view that the Americans, Japanese, and British—the period’s three major naval powers—had revived and continued to further the naval arms limitations process. Yet, the parleys had been contentious and the concluding climate did not necessarily indicate a more pacific world was near notwithstanding the tempered statements of the principal delegates. There is a warning in this for the modern observer: Process in international dialogue is important, but it is not everything. Concluding a treaty may actually exacerbate tensions rather than alleviate the very problems seemingly requiring resolution in the first instance. This may be so the longer negotiations continue with positions becoming entrenched and where each side is set on maximizing a perceived comparative advantage.

Why a limited agreement was possible owed everything to the will of two statesmen now at center stage: Herbert Hoover for the United States and Ramsay Macdonald of Great Britain. This willpower was also present from Japanese leadership and, from what followed in the wake of the negotiated treaty, not necessarily to their statesmen’s good health. If accommodation was to be reached, given the differing strategic requirements of the participants and the non-congruent natures of their navies, the primacy of political objectives was imperative. Indeed, in view of the rancor sometimes present and the belief that others had not faithfully followed the spirit of the Washington Treaties, professional opinion was decidedly hostile to the efforts underway to continue and expand the regime of naval arms control. These views were present in each of the delegations in varying degrees. If they did not prevent the truncated agreement secured from being ratified by the three principal powers at the close of 1930, they fostered a climate in Japanese circles poisoning her future polity.

If a shortcoming is apparent in this otherwise excellent study, it is its narrow focus. A chapter outlining the contours of overall disarmament efforts which included the contemporary military and air sides of the equation and the measures pursued such as the Geneva Protocol of 1925, the Kellogg-Briand Pact, and the Locarno Agreement would have been useful to provide some of the missing context. Most of these are mentioned in passing, but the reader unfamiliar with the times may fail to appreciate the linkages. What was attempted at London in 1930 remained a part of a process. Meanwhile, something might have been said about the burdens of empire for Britain—bringing status but not much more as the dominions resisted an imperial navy while the Americans negotiated from the basis that such existed. Likewise and turning to our own period, a discussion how regulation of the seas has supplanted the regulation of navies could have anchored the essays more firmly to the interests of current readership. The previous does not detract from what is surveyed. The conference and its legacy have a broader context, resonance, and meaning than related. More surprising, however, is that no appendix specifying the final agreement is provided.

The editors do indicate, though, why the conference should be better known to the modern observer. Ongoing naval competition and rivalries remain a fact of life and juxtaposing the negotiations of 1930 to the perils of today, particularly in the Asia/Pacific region. This indicates one possible fault line where an analysis of the London Conference would not be wasted. The only real exception to At the Crossroads this reviewer takes is with its title. The issue of naval arms control was an important one for the period and influenced the configuration of navies when war came. Yet, it was not central to the causes of that war—not even the Pacific War. Here, Japanese actions in Asia were always the greater problem. Indeed, naval understanding was the one area where Britain and Germany had found common ground until Hitler repudiated the Anglo-German Naval Agreement in 1939. This, though, is a small difference. The work itself remains and Maurer and Bell are to be congratulated on successfully stewarding the essays presented.

What the anthology remains to poets, the edited work has become for historians: It provides an attractive introduction but leaves one desiring to know far more. Perhaps this is why there will always be a market for such works and why one should accept these offerings on the terms presented. At the Crossroads Between Peace and War is a very good collection of essays interweaving the story of diplomacy with naval history. If it moves others to plow deeper furrows, then Maurer and Bell will have succeeded amply.

Dr. Moretz is affiliated with the British Commission for Military History.