The 2013 winter storm is one of the most interesting weather anomalies in recent memory. Most Americans are by now familiar with terms like “polar vortex” and “snow squalls.”  Winter Storm Titan is currently wreaking havoc on the mid-Atlantic state causing thousands of flight delays and closures. This current is not, however, the only time that strange weather impacted the United States so deep into the season.  According to weather analysts, the 1843 winter season was far worse.  In Historical Climate Variability and Impacts in North America, John W. Neilson-Gammon and Brent McRoberts argue that March 1843 was possibly “the most abnormal weather month in the History of United States weather records.”  Cold weather and snowstorms gripped the country from the Kansas plains to New England.  For one naval officer, the storm almost proved his undoing.

—————————-
Captain Edward Beach wrote in his history of the United States Navy that the period between the War of 1812 and the Civil War was “a time of complacency as the heroes of the famous naval war rested on past laurels.”

In 1843, Josiah Tattnall could easily rest on his own laurels.  Tattnall was an officer profoundly dedicated to doing his duty as a naval officer.  He, along with many other officers, felt the patriotic sway of his Georgia homeland far outweigh personal misgivings about secession during the American Civil War.

His early years of service are a testament to his future leadership.  As a young midshipman, Tattnall took a force from the Washington Navy Yard into battle at Bladensburg in a heroic yet unsuccessful attempt to thwart the British invasion of the capital. After the war, he sailed with Stephen Decatur to Algiers to fight the Barbary Pirates in the Second Barbary War. He helped capture the frigate Mashouda and brig Estedio.  After a number of years serving in the United States and the Mediterranean as the commanding officer of several ships and the Boston Navy Yard, Commander Tattnall was appointed the commanding officer of the sloop-of-war Saratoga, one of the newest and largest vessels of her kind.

Saratoga was built in the Portsmouth Navy Yard in 1841 and commissioned in January 1843. Tattnall, fresh from a tour with the Mediterranean Squadron, returned to the United States to take command of the vessel. Plans were made for the ship to leave Portsmouth for New York in the middle of March for a tour with the Africa Squadron protecting American interests and stopping the slave trade. The ship departed from Portsmouth, New Hampshire, on 16 March 1943 for New York when it encountered what one biographer of Tattnall called “a serious disaster.” 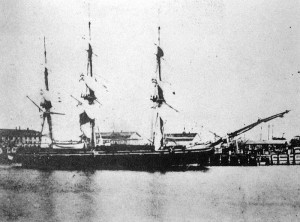 The weather on the afternoon of 16 March was terrible.  High winds and a low-pressure system put the northeast in a state of emergency. Tattnall and his crew felt they could get clear the New England coast before the weather become too dangerous and impassable.  By nightfall, blinding snow and a strong gale from the northeast forced the ship to return to Portsmouth.  According to the deck log, the wind blew away the foretopmast stay sail. Tattnall wrote to the Secretary of the Navy on the 19th in further detail.  The following are excerpts from his letter:

“At 11 P.M. we had passed Newburyport, and were heading to windward of Cape Ann, when the wind shifted to east southeast, and increased suddenly to a severe gale, with snow and sleet, obliging us to carry a heavy press of canvas to keep off shore, the snow and sleet, which froze as they fell, coating everything with ice and rendering it impossible to furl the sails, as the increase of wind and sea obliged us to take them in [. . .] the canvas was so frozen and stiff that their efforts were unavailing.”

“Preparations were made for anchoring and cutting away the masts [. . .] The heavy sea, and probably the tide (although allowance was made, in the course we steered, for both), drove us to leeward, the atmosphere being so hazy that we could not see more than half a mile in any direction [. . .] We found ourselves standing directly on to a rocky shore extending for some distance on both bows, and on which the sea was breaking heavily.”

“The ship was brought to the wind, both bowers let go, the chains veered to clinch in the teers, 150 fathoms on each, and the masts cut away. We were near enough to the shore to be benefited by the under tow, and rode out the remainder of the gale in safety.”

Tattnall’s cool head and quick thinking saved his ship and crew. When the storm cleared the following afternoon, the Saratoga was only a quarter mile from the breakers of Portsmouth along the sands of Rye Beach near the mouth of the harbor. Several officers wrote to Tattnall upon his return to Portsmouth, praising him for his heroic act and “good and bad fortune.”  One letter, dated 23 March 1943, is particularly blunt and to the point.  The colleague opens his letter to Tattnall by congratulating him from his “narrow escape from a watery grave.” The Saratoga slumped back into Portsmouth for a series of necessary repairs and refittings.  She would not get underway again for another two months.