(Editor’s note: This is the 26th a series of blogs by Norman Polmar—author, analyst, and consultant specializing in the naval, aviation, and intelligence fields. Follow the full series here.) 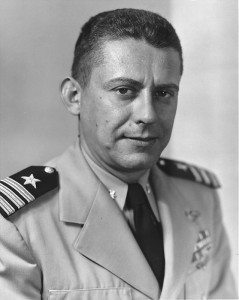 Being a “character” is a very positive description of a person.  To me, a character is one who thinks for himself or herself, who does not necessarily follow the crowd, and who often “thinks outside of the box.”   Captain Richard B. (Dick) Laning was a “character” of the first order.

After graduating from the Naval Academy in 1940, Laning served in the new aircraft carrier Hornet (CV 8), from her commissioning in October 1941 until August 1942.  Thus, he was on board when she launched the Doolittle air strike against Japan in April 1942, and at the Battle of Midway in June 1942.

Laning then attended submarine school and went to sea in the USS Salmon (SS 182).  Rising to executive office of the submarine, he was awarded the Bronze Star Medal and the Silver Star Medal for his role in several actions against the Japanese.  The official record of one action reads, the Salmon “scored two direct hits on an enemy tanker, in defiance of four escort ships within 1,000 yards of the target…. Forced to dive twice her test depth by terrific depth charging, which started many leaks and put vital machinery out of action, she daringly battle-surfaced to effect emergency repairs and fight it out….” The submarine  received the Presidential Unit Citation for this action.

The Salmon was decommissioned in 1944 and Laning became executive officer of the submarine Stickleback (SS 415) for the remainder of the war.  After the war he was given command of the Pilotfish (SS 386), which had been damaged in the war and was scheduled  to be used as a target in the Bikini atomic bomb tests in July1946.  (The submarine was sunk in the tests.)

At Bikini Laning spoke with Dr. George Gamow, a theoretical physicist and expert on nuclear physics.  They discussed the feasibility of a nuclear-propelled submarine… not knowing that the Navy had actually begun research on such a project in 1939.  After their discussions, Laning wrote a letter, through the chain-of-command, recommending a nuclear propulsion program and volunteering to serve in the program.  He did not receive a reply.  Subsequently, Laning served ashore, and earned a master of science in nuclear physics from the University of California at Berkley.  Back at sea, he commanded the diesel submarines Trutta (SS 421) and then the brand-new Harder  (SS 568 ).  And, after nuclear power training, on 30 March 1957, he placed in commission the USS Seawolf  (SSN 575), the world’s second nuclear-propelled submarine.   Laning commanded her until December 1958, when she went into the yard to have her unique sodium-liquid-cooled reactor replaced by a pressurized-water reactor, which was used in all other U.S. nuclear submarines.

Always looking for “better,” Laning strongly opposed the change, arguing with Admiral H.G. Rickover, head of the nuclear program, that the unique propulsion plant should be further evaluated.  Rickover “won” the argument.

In 1960, after attending the National War College, he received another unique assignment: To take command of the submarine tender Proteus (AS 19), then being converted to support Polaris missile submarines.  About this time my “submarine mentors,” then-Captain F.J. (Fritz) Harlfinger and then-Commander Dominic A. Paolucci, were introducing me to all of the early nuclear submarine skippers.  Thus I met “Dick” Laning and we immediately “hit it off.”  We kept in contact when he took the Proteus to sea, and when she was based at Holy Loch, Scotland, the first tender to support U.S. missile submarines.

He ran a “taut” ship and—the story goes—he always wore a .45-caliber pistol… he had nuclear-armed missiles on board and was prepared for any eventuality.   He commanded the Proteus until 1962, when he went on to shore duty at Pearl Harbor.

Dick retired from the Navy in 1963 and became a corporate planner for United Aircraft Corp.  In 1973 he and his wife, Ruth, moved to Florida where he was active writing and in the local Chamber of Commerce.  We kept in contact and he helped me considerably when I was writing Rickover: Controversy and Genius  (1982), which I coauthored with Thomas B. Allen.
On one occasion Dick and I met in Orlando, near his home, to discuss the Rickover project.  I had found a copy of the Navy orders to Lieutenant James Earl Carter to report to the USS Seawolf.  I asked Dick about what kind of a person and officer he was aboard the submarine.  Dick laughed.  He said that Carter—who would become the 39th president—had never reported aboard.  His father had died and he resigned his Navy commission  just before reporting to the Seawolf.
In his letters and our direct conversations, the latter usually over lunch or dinner, often with Harlfinger or Paolucci  joining us, Dick always confirmed that he was an original thinker—someone always looking for a “better” solution.

He passed away on 5 March 2006.  The world lost an outstanding submariner, a hero, and a most original “character.”