This paper was originally intended to be a follow on my experiences as an engineer aboard commercial tankers. The original intent was to provide a description of World War II-built turboelectric Destroyer Escorts and to illustrate the commonality they shared with commercial T-2 Tanker power plants. In the process of preparing this post, it became apparent that it would be desirable to expand it’s scope to include a discussion of the experiences that the U.S. Navy had in the delivery of ship to shore electrical power for humanitarian assistance.

In general, the amount of ship to shore power that can be delivered by US naval vessels is limited by a number of factors, including installed generating plant capacity and the availability of topside shore power connections. By far, the majority of current naval vessel electrical distribution systems are three phase, 450 VAC, 60 Hz. Exceptions are nuclear carriers, the newest LHA and LHD types, and the DDG 1000 Class ships which have (or will have) 4160 VAC distribution systems.  The new T-AKE 1 Class ships operated by MSC have 6600 VAC integrated diesel-electric power plants. As a general rule of thumb, it becomes necessary to go to higher voltages aboard ships with generating plants with a capacity of 10,000 kW or greater because of circuit breaker interrupting capacity and cable limitations.

The DDG 51 Flight IIA Class will be used as an example to illustrate existing limitations in generating plant capacity. Each of these ships is fitted with three gas turbine driven ship service generators (SSGTG), rated at 2500 kW 450 VAC, 60 Hz (3000 kW on DDG 91 and follow). Using these ships as an example, this would appear to provide a total generating plant capacity of at least 7500 kW. However, there are several additional limitations that must be taken into account.

Given these limitations, the usable generating plant capacity aboard these ships is approximately 4500 kW (5400 kW on the later ships). In addition, ships must supply their own in-port services that may be as much as 2500 kW or more. This only leaves a margin of about 2000 to 3000 kW of available excess energy. This is a bit misleading because the ships only had two topside shore power connections, each consisting of four cables; each rated at 400 amperes giving a total of 3200 amperes through eight cables. Assuming a power factor of .8 and no more than 90% loading, this results in a total delivery capability of about 1800 kW. Coupled with the fact that many of the countries that could require humanitarian relief have 50 Hz distribution systems, these factors impose severe limitations on the ability of modern surface combatant ships to deliver shore power.  Destroyer tenders (AD) and submarine tenders (AS) could deliver as much as 7000 kW at 450 VAC to ships alongside them. Only two submarine tenders remain in service as of 2014, USS Emory S. Land (AS 39), based in Diego Garcia, and USS Frank Cable (AS 40), based in Guam. Modern ships with integrated electric drive plants have high generating plant capacities. However, significant alterations would be required to make them capable of delivering large amounts of shore power.

The above limitations did not exist aboard older ships with turboelectric and diesel-electric plants because these ships had separate propulsion and ship service generating plants. It was possible to divert the bulk of the power from the main propulsion generators to shore at either 50 or 60 Hz provided that adequate cable reels were available. Some examples are discussed in the following paragraphs.

Approximately 440 Destroyer Escorts (DE) was built between 1943 and 1944. Ninety-five of them were converted to high-speed transports, and another seventy-eight was delivered to the United Kingdom under the Lend Lease agreement where they served as Captain Class frigates. The ships were divided into six classes and had four different propulsion plants including geared steam turbine, turboelectric, geared diesel, and diesel-electric systems.

One hundred and two ships of the Buckley (DE 51) and an additional twenty-two ships of the Rudderow (DE 224) had twin-screw turboelectric (TE) propulsion plants rated at 12,000 SHP. Maximum sustained speed was approximately twenty-four knots. A major reason for the use of turboelectric propulsion systems was limitations in reduction gear manufacturing capabilities during the war. Priority had to be given to manufacturing the double reduction gears required on destroyers, which had propulsion plants rated at 60,000 SHP. General Electric and Westinghouse manufactured the systems. They had many commonalities with the propulsion plants aboard the T-2 tankers described in a previous post. The machinery arrangement was similar to that aboard navy destroyers with alternating fire rooms and engine rooms. Each fire room contained a single D type boiler which produced superheated steam at a pressure of 450 PSI and a temperature of 750° F. Each engine room contained one main propulsion generator rated at 4600 kW, 2700 VAC, 93.3 Hz, 5400 RPM, one ship service turbo generator rated at 300 kW at 450 VAC/40 kW DC, and a 6000 SHP, 400 RPM main propulsion motor. The main propulsion control consoles were very similar in appearance to those on T-2 tankers. The ships had the capability of operating both main motors on a single main generator.

During World War II, a total of five ships of the Buckley Class and two British Captain Class frigates were converted into floating power stations for the purpose of supplying electrical power to shore in the event of a power outage. It is understood that a number of other ships of the class were recycled as floating power stations for coastal cities in Latin America under a program sponsored by the World Bank.  However, no additional information is readily available concerning this program. A discussion of the services provided by the five Buckley Class ships is contained in the following paragraphs.

A major part of the conversion process consisted of the removal of torpedo tubes and installation of large cable reels located on the O1 Deck, as shown in the following illustrations: 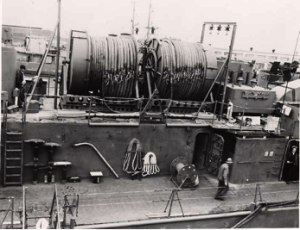 The floating power plants had a total generating plant capacity of approximately 8000 kW (estimated), 2300 VAC, 60 Hz, .8 Power Factor. This equates to a usable generating plant capacity of approximately 7200 kW taking into account the 90% load factor. 50 Hz power could be easily provided to locations where necessary. The only action required was to slow the main generators down from 3600 to 3000 RPM by the use of the governor control levers. This capability does not exist in any vessels currently in service.

USS Donnell (DE 56) was converted into a power barge in England in 1944 after a torpedo struck it during convoy duty. Damage was fairly extensive and propulsion power could not be readily restored. The ship was then towed to Cherbourg, France, where it supplied power for a period of time. This experiment was considered to be very successful. It resulted in the decision to convert the other vessels on this list into floating power plants.

USS Foss (DE 59) provided power to the city of Portland, Maine, in 1947-1948 during a severe drought and a number of forest fires. At the time, it was assigned to operational development duties along with its sister ship, the USS Maloy (DE 791). There is no record of Maloy ever being converted into a floating power plant. Foss later supplied shore power to various ports in Korea in 1950-1951. 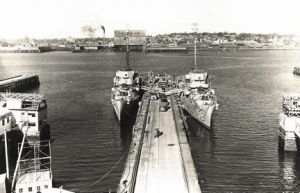 USS Lexington (CV-2) and USS Saratoga (CV-3) entered service in 1928. Both ships were ahead of their time. They were fitted with turbo-electric propulsion systems rated at 180,000 SHP. The ships had four steam turbine driven main propulsion generators each rated at 35,200 kW, 5000 VAC. Unlike more modern installations, the plants were not integrated and ship service power was DC supplied by 6 separate generators, each rated at 750 kW, 240 Volts DC. Up until the early 1930s, the only use the U.S. Navy had made of AC was in the propulsion systems aboard the USS Langley (CV-1) and six battleships that entered service in the 1920s.

In 1929, Washington State suffered a drought that resulted in a loss of hydroelectric power to the city of Tacoma. The U.S. Navy sent Lexington, which had been in the shipyard at Bremerton to Tacoma to provide power to the city. A considerable amount of coordination was required between the city and the ship in order to allow Lexington to provide power. The hookup consisted of twelve cables connected to circuit breakers and a bank of transformers located on the dock with a total rating of 20,000 kVA. The ship then provided a total of 4,520,960 kilowatt hours from one main propulsion generator between 17 December, 1929 until 16 January, 1930, at an average rating of 13,000 kW until melting snow and rain brought the local reservoirs up to a level where normal power could be restored. 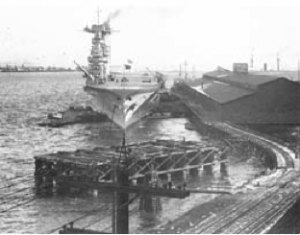 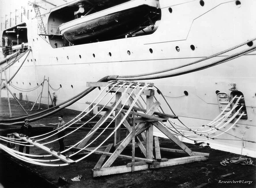 The US Army also had a Nuclear Power Program in the 1960s. As part of this program they converted an existing Liberty ship into the Sturgis (MH-1A), a floating nuclear power station. This involved the removal of the existing propulsion plant and installation of a pressurized water reactor in a 350-ton containment vessel. After several months of testing Sturgis was towed to the Panama Canal Zone where it supplied 10,000 kW of power to operate the locks from 1968 through 1976 because of a water shortage which had an impact due to the loss of hydroelectric power. Unfortunately, the cost of operation proved to be very high and Sturgis was retired in 1976 after the Army Reactor Program was discontinued.  Sturgis was then defueled and placed into the James River Reserve Fleet.