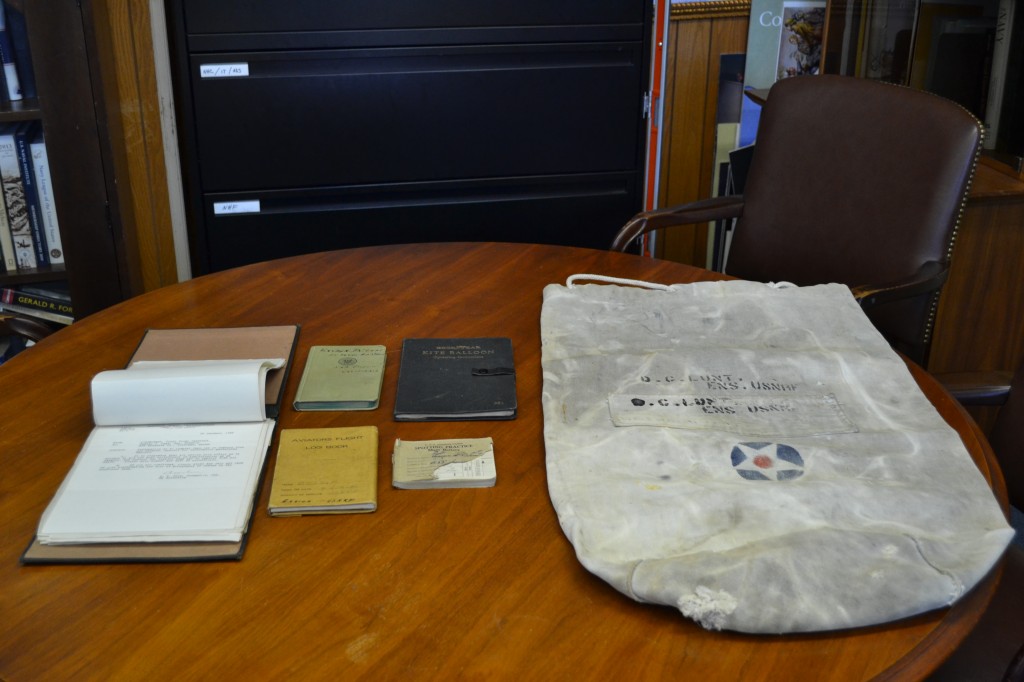 The Naval Historical Foundation recently received some very interesting pieces of naval aviation memorabilia from the descendants of Ensign Dudley C. Lunt, USNRF.  Lunt enlisted in the Naval Reserve in March 1918 and was called into active service shortly thereafter.  He found himself at a ground school for aviation cadets at the Massachusetts Institute of Technology (Early predecessor to V-12) before attending a six-week flight school on ballooning in Akron, Ohio.  He commissioned as an Ensign in Hampton Roads on 2 November 1918, nine days before the end of the war. In his short stint as a naval officer, Lunt served as the kite balloon pilot of the battleship USS Arizona. He made his first and only Caribbean cruise proving “the utter futility of attempting to fly kites from battleships.”   He spent time stationed in San Diego before heading back to the East Coast to pursue other ventures. The family offered up several items used by World War I-era naval kite fliers like Lunt for donation.  The items included:

At the time that Arizona commissioned in 1915, sighting and spotting the fall of shot depended on the vantage point of the two cage masts on the ship.  To correct this, kite balloons were deployed to raise the vantage point so spotters could see even father. Lunt was one of a select few aviators assigned to a battleship.  According to one history of the Naval Reserve Forces, very few graduated from the program to become officers.  Most went back to join the enlisted ranks. Of those graduating officers, only a handful made it as kite observers on battleships.

The Goodyear Tire & Rubber Company produced the “Type R” Kite Balloon used by Lunt. Goodyear made over ninety of the 117 procured for the United States Navy during the World War I-era. Kite balloons went back as far as 1893 and remained unchanged through the First World War.  The cigar-shaped “Type R” balloon was 92 feet long with a diameter of around 27 feet.  Rigging attached to the balloon held the basket where naval observers could spot and identify targets. 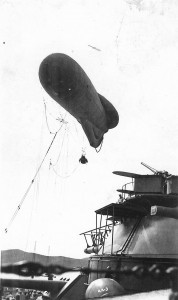 According to historian Paul Stilwell, battleships like Arizona also began using airplanes at the same time they experimented with balloons. Aircraft like the French Nieuport and English Sopwith were used for scouting and spotting, though more preferred for the latter. Planes were better equipped for spotting than kite balloons, as Lunt quickly found out during his Caribbean cruise.  Planes also had the benefit of not being tethered to the ship.  Planes would eventually phase out kite observation balloons in the mid 1920s. Balloons did, however, resurface during World War II as a deterrent for dive-bombing attacks from enemy fighters.

Lunt left the Navy to attend Harvard Law School after a failed attempt to take on Wall Street in New York.  According to Lunt, he forgot that he was still just a “country boy.” Thankfully, the law proved more beneficial to him. Lunt became a lawyer in Delaware before beginning a well-received newspaper and literary career that lasted until his death in 1981.

As we have done on a number of occasions in recent years, the Foundation served as a facilitator between artifact donor and the most suitable repository to accept the donation. These items were sent to Hill Goodspeed, historian at the National Naval Aviation Museum.  We would like to thank long-time member Rear Adm. Mac MacKinnon for bringing the possible donation to our attention, and the family of Dudley Lunt for ensuring this intriguing slice of naval aviation and battleship history will be preserved for the benefit of historians, veterans and researchers! 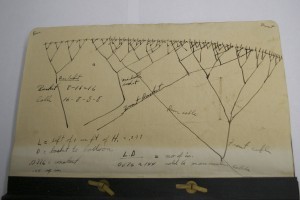 Ensign Lunt’s personal sketches in the back of the Goodyear tech manual.