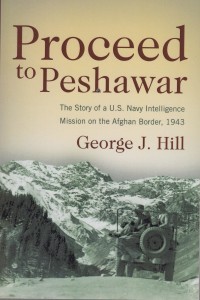 George J. Hill, a graduate of Yale University and Harvard Medical School, served in the Marines Corps and U.S. Public Health Service until he retired as a Captain, Medical Corps, USNR, in 1992. He is the son-in-law of Albert W. Zimmermann who is the focus of this intriguing and well-written biography. Hill used his father-in-law’s letters, notes, still images, and 16mm motion pictures.  He also used archival and Freedom of Information Act materials in the preparation of the book (xxiv + 228 pp.), which is accompanied by two maps and thirty original black-and-white pictures never before published. The author also utilized documents from five major archives, as well as 159 secondary sources and 14 interviews and correspondence in writing a five-chapter narrative augmented with 338 endnotes. The book is the result of meticulous and painstaking scholarship.

This is a cautionary and engaging tale that provides significant insight on the complexities of the little-understood region between Afghanistan and present-day Pakistan. The volume relates directly to the concept of the “Great Game,” a term for the strategic rivalry and struggle for supremacy between the British and Russian Empires in Central Asia. The term has been attributed to Captain Arthur Conolly (1807-1842), an intelligence officer of the British East India Company.

It is at this point that Hill begins his narrative; the story of adventure in the Hindu Kush (the western extension of the Himalayas) in late 1943 and of a previously untold military and naval intelligence mission during World War II by two American officers along 800 miles of the Durand Line, a breachable border between Afghanistan and Pakistan (Pakistan was a part of British India until 1947).

The second chapter, “The Travelers and Others Who were Involved in the Trip,” focuses on the three officers who made the trip. Iowa-born Major (later Colonel) Gordon Bandy Enders, USAR, age 46, was the “driving force” behind the trip. He spent his younger years in India and was a pilot and accomplished linguist (fluent in Hindustani, Tibetan, and Chinese). Enders had remarkably similar experiences to those of Kim O’Hara in Kipling’s Kim, and became a military intelligence officer by 1943.  Major (later Lieutenant Colonel) Sir Benjamin Gonville Bromhead, OBE, IA, age 43, a hereditary British noble, spent much of his military career in the NWFP (1922-1943). Lieutenant (later Lieutenant Commander) Albert W. Zimmermann, USNR, age 41, a “socialite” and native of Philadelphia with a B.S. in electrical engineering. He was “apparently picked at random” but was a senior naval liaison officer in Karachi, India (later Pakistan).  Hill details other individuals “who knew” about this intelligence trip. Among them: Sir George Cunningham, Governor, NWFP; Lieutenant Commander Francis Smith, USN; Hon. Cornelius Engert, U.S. minister to Afghanistan; Lieutenant Colonel “Rex” Benson; Hon. Clarence Macy, American Counsel at Karachi; Field Marshall Archibald Wavell; and Lieutenant Colonel William Hay, British Commissioner, Baluchistan. Others who learned about the trip or likely learned about it are also documented.

“The Trip” was documented during the venture by Zimmermann. He kept notes and took more than 100 photographs. Zimmermann documents the trip in four chronological phases: 12-15 November 1943 (the city of Peshawar to the tribal territories); 16-23 November (the “northern portion” of the trip: Malikand, Swat Valley, and Chitral – including a visit to an antimony mine); 24-28 November (Peshawar and the Khyber Pass – Hill notes Lowell Thomas’s vivid 1923 description of the pass); and 29 November-15 December (Waziristan, Baluchistan, the Bolan Pass, and city of Quetta).

Chapter 4 “Aftermath: The Outcome, 1944 and Beyond” (pp. 88-128) considers the spring, summer, and fall of 1944. AZ reported that the team “had not discovered anything on the trip that was unexpected.”  The team was soon dispersed to other assignments, but Hill reviews Enders’s account of the trip and debriefings by superiors, noting that no official comprehensive report was ever prepared.  Zimmermann’s separate trip to Baluchistan in September 1944 is detailed briefly as is a popular article on the trip that appeared in the September 30, 1944 New Yorker.  During the winter of 1944-1945, Zimmermann sold pictures to National Geographic magazine.  However, they were never published and his article was not accepted. Hence, he gave up trying to publish his account of the adventure. Nonetheless, Hill documents the outcome of the trip, commenting that the Americans “perceived no national intelligence issue,” although the British were able to convey the nature of the problems they faced with the tribes in the NWFP and Baluchistan and how they were dealing with them. Was this an attempt to draw the U.S. into the next phase of the “Great Game?”

However, is was clear that the British (and ultimately the Americans) needed to understand the importance of honorifics, gift-giving, negotiations with tribal elders, blood feuds, and the significance of mullahs. The issues of the “Indian problem” and the “Pashtunistan problem” are reviewed, and Hill ends the chapter with concerns about Axis sympathizers and surrogates in the region, Russian interests in Afghanistan, and oil. He could have added mineral wealth: Copper, gold, iron, silver, and semi-precious stones (rubies, sapphires, garnets, and lapis).  In the fifth chapter, “Afterword and Closure, after September 11, 2001,” Hill reports that the 1943 trip appears to be the first time that any American officials were permitted to travel for any distance along either side of the Durand Line. The Americans were also the first to drive a motor vehicle over the Lowari Pass between Dir and Chitral. While Enders and Zimmermann comprehended the problems the British faced in the NWFP, other Americans saw the region as a “remote area of little interest to America.” The Soviet invasion of Afghanistan in 1979 led to a reawakening for the Americans; places such as Tora Bora, Khyber Pakhtunkhwa, Southern Waziristan, and the Haqqani network now appear frequently in U.S. newspaper headlines. What, if anything have we learned? Zimmermann’s meticulous accounts and Hill’s thoughtful and compelling research point to directions and missed opportunities. The narrative also provides insight about small group dynamics among the travelers, and British perspectives on the region.  The volume is a valuable contribution to the history and culture of the region – little has changed over the past seven decades. Hill ends his narrative, sobering and appropriately, with a quote from Rudyard Kipling’s Kim: “When everyone is dead the Great Game is finished.  Not before.”

Dr. Kolb, an Independent Scholar (National Endowment for the Humanities, Ret.) has written extensively about the history and culture of Afghanistan and worked in that country since 1965, most recently in October 2013.