In Death Unafraid is a two part blog miniseries chronicling the history and memory of the USS Maine from 1898 to present.  Read PART I here.

When riots broke out in Havana at the beginning of 1898, the McKinley government sent the battleship Maine there to protect American interests and “show the flag.”  Secretary of the Navy John D. Long remained adamant that the ship’s appearance off the coast of Cuba did not warrant any act of American aggression against the Spanish.

A month later, aggression came to the Maine.  An explosion in the forward magazine caused the deaths of nearly three-quarters of her crew. Americans were eager to seek justice for the dead.  More than that, they wanted to remember and honor those who lost their lives the evening of 15 February.

War in a Time of Peace
As quickly as the ship sank to the bottom of the harbor, Americans began a nationwide campaign to pay tribute.  Newspapermen like Hearst and Pulitzer fabricated the truth to sell newspapers.  Hearst went as far as to offer a $50,000 reward for the conviction of the “criminals” responsible for the explosion.  According to historian Ivan Musicant’s monograph Empire by Defaut, the New York Journal ran an average of eight and a half pages of material about the Maine in the week after the sinking. If Americans were unaware of the ship before, they became more than intimate with her details in the weeks to follow. Needless to say, theatrics of any kind dominated the opening months of 1898.

Looking through the history and documents today, one wonders why this single event instigated so much “war fever” amongst Americans. It was less than ten years since the end of the Indian Wars. Over thirty years passed since Lee surrendered at Appomattox. Both campaigns occurred inside the United States. Foreign intervention was, at the time, a thing of the past. Many Americans felt their ideals aligned closely with the emerging social theories of progressivism and reform. Economic growth and the spirit of invention dominated. Put simply, war and conflict was not a part of the postbellum term of peace.

Do we continue to “Remember the Maine” because of its severe loss of life? It was the first attack of its kind against the United States. It would take another forty-three years for a U.S. Navy ship to become as significant and symbolic as the Maine, the USS Arizona. Yet the Maine was not lost in wartime; it was a peacetime disaster.  Although the loss undoubtedly fomented a military response, her sinking in Havana Harbor came about amidst peace.

Perhaps it is a numbers game. The Maine ranks as one of the worst losses of life during a time of peace in U.S. naval history. Only the loss of the Cyclops in the Bermuda Triangle and the USS Insurgent ranks higher. In fact, fewer sailors died in the ensuing Spanish-American conflict than on the night of 15 February. 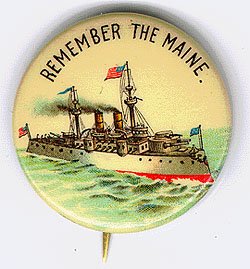 Americans still needed a battle cry. According to folklore, a man in a Manhattan bar raised his glass and toasted, “Gentleman, remember the Maine.” Amidst the jeers of patriotic enthusiasm, one journalist in the bar that night overheard the speech and took it to the newspapers.  The published words became the rally of the Spanish-American War:

“REMEMBER THE MAINE. TO HELL WITH SPAIN.”

The slogan appeared in newspapers around the country.  Pins and buttons containing the slogan sold to anxious and eager crowds. Composer and lyricist E.A. Warren also took the opportunity to capitalize on the pregnant moment with his song, “Boys, Remember the Maine.” His patriotic ballad included lyrics dripping with fighting spirit and the necessity for war:

“Our gallant fleet is on the move, we’re fighting treach’rous Spain,
Spurred on by the battle cry, ‘Re-mem-ber the Maine!’”

“The stars and stripes are waving on the land and sea,
Underneath this banner Cuba shall be free; The army and the navy,
While they’re fighting Spain, Go forth with the watchword, “Remember the ‘Maine!’”

One of the last lines of the song is particularly interesting. Warren goes back to the American Civil War to evoke the need for camaraderie against a singular foe:

“Now brothers in a common cause, they chant the same refrain, The ‘Blue and Gray’ march side by side, Remember the Maine.” 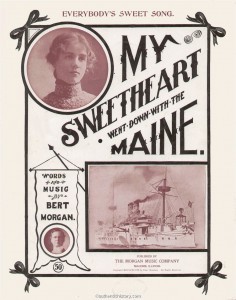 Other songs surfaced.  Composer Bert Morgan’s “My Sweetheart Went Down with the Maine” is a touching ode to love and loss.  The song tells the story of a woman waiting to wed a sailor serving aboard the “gallant ship.”  He captures her uneasiness with the swift death that came to the sailor, unknowing of his eventual fate:

“Anchored at Havana, on the Cuban shore,
Conscious of no danger, dreaming love-days o’er,
Peacefully he slumbered in his hammock bed
While the stars in glorious beauty benediction said.”

Their marriage was cut short by the explosion.  Morgan ends the sorrowful song with a call to arms against  “the cowardly fiends who slaughtered the crew of the Maine.”

Political cartoonist also took advantage of the situation, drawing a slew of anti-Spanish and pro-war propaganda pieces in honor of the men lost aboard the Maine.  Political cartoons donning the immortal war cry began surfacing in April 1898, just as the United States Government chose to declare war against the Spanish Empire. 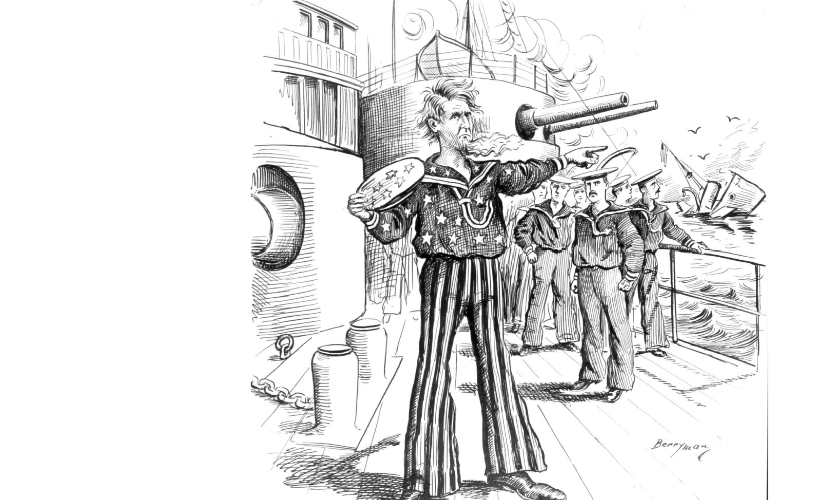 Acclaimed political cartoonist Clifford Berryman’s “And, Boys, Remember the Maine!” is a testament to the keen sense of patriotism and purpose felt by sailors entering the conflict.  The cartoon depicts Uncle Sam pointing to the wreck of the Maine.  Stern faced and wearing a flag-inspired sailor’s uniform, Uncle Sam sets the tone for reverence and vengeance.  You can easily see the wreck of the ship in the background.  The sailors on the ship are either looking into the distance or at Uncle Sam, as if to communicate a longing to move forward into the distance beyond the wreck and into victory. 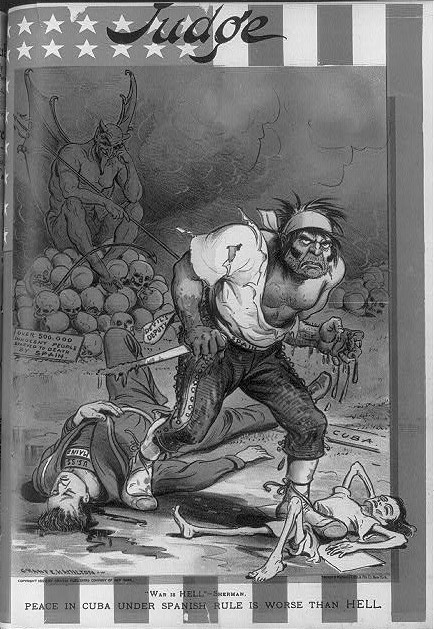 The 30 April edition of Judge magazine plays on the fears and dehumanization so often seen in World War I and World War II propaganda.  The cartoon, titled “War is Hell,” shows a brutish Spaniard trampling on a starving Cuban child and dead Maine sailor. The caption reads, “Peace in Cuba under Spanish rule is worth than hell.” A devilish figure sitting atop a mountain of skulls is also seen in the background.

Disaster on the Silver Screen
Film in 1898 was still a relatively new technology.  Vaudeville and stage theaters were, however, a popular form of entertainment and diversion for Americans. According to the Library of Congress website “The Motion Picture Camera Goes to War,” conflict with Spain “increased the movies’ popularity, since films of the war sparked great interest and patriotism in theater-goers.” All moviemakers had to do was put the sensationalist stories in print on the silver screen.

The American Mutoscope & Biograph film company sent cameramen to Cuba to film the wreckage of the Maine “almost immediately” after she sank.  They also filmed other battleships, including the Spanish warship Vizcaya in the weeks and months that followed.  The company cleverly retitled the Iowa and Massachusetts as the “Maine” to peak the curiosity and interest of the American public. Competing companies like the Edison Manufacturing Company also traveled down to Cuba to shoot footage of the wreckage for the “War Extra” catalog.  Both companies offer a keen snapshot to the real (and often staged) footage of the Maine and her victims. The description to Edison’s “Wreck of the Battleship “Maine” is one of the few straightforward pieces of contemporary news footage about the ship you will see:

“The warped and twisted remains show how thoroughly this immense mass of iron and steel was blown out of all semblance of a vessel.”

Feature films were still an untamed concept.  The majority of releases in the late nineteenth century were short films.  The most notable silent film released about the Maine was “Divers at Work on the Wreck of the Maine – 1898,” directed by Georges Méliès.  The 53-second film is cartoonish at best.  It portrays divers surveying the blown-out hull of the ship at the bottom of the harbor.  Fake bodies are taken out of the ship and ferried up to the surface.  For the first time, the film medium gave the general public a visual representation of the words printed in Pulitzer and Hearst’s newspapers.  It is as traumatic and harrowing as film allowed for the time period.

“The Good Old Fashioned Way”
Today, the Maine rests easy off the Cuban coastline.  She is not only a sacred naval vessel, but also a careful cautionary reminder of the unique cause and effect relationship of the military when it is mixed with the powers of the press, propaganda, and persuasion.

A series of poems following Admiral George Dewey’s lop-sided triumph at Manila Bay were published in the 8 May edition of the Saint Paul Globe.  The title of the section, “Manila and the Muse,” was a full-blown dedication to Dewey and his victory in the Philippines.  One poem written by Boston Globe editor Edward F. Burns focused attention once again to the Maine. The first stanza of “They Remembered the Maine” says much about the power that the ship had on the psyche of the public and military at the height of the Spanish-American War. It is as if his victory secured the promise of justice and vengeance perpetuated through contemporary print, film, and music: