In Death Unafraid is a two part blog miniseries chronicling the history and memory of the USS Maine from 1898 to present. 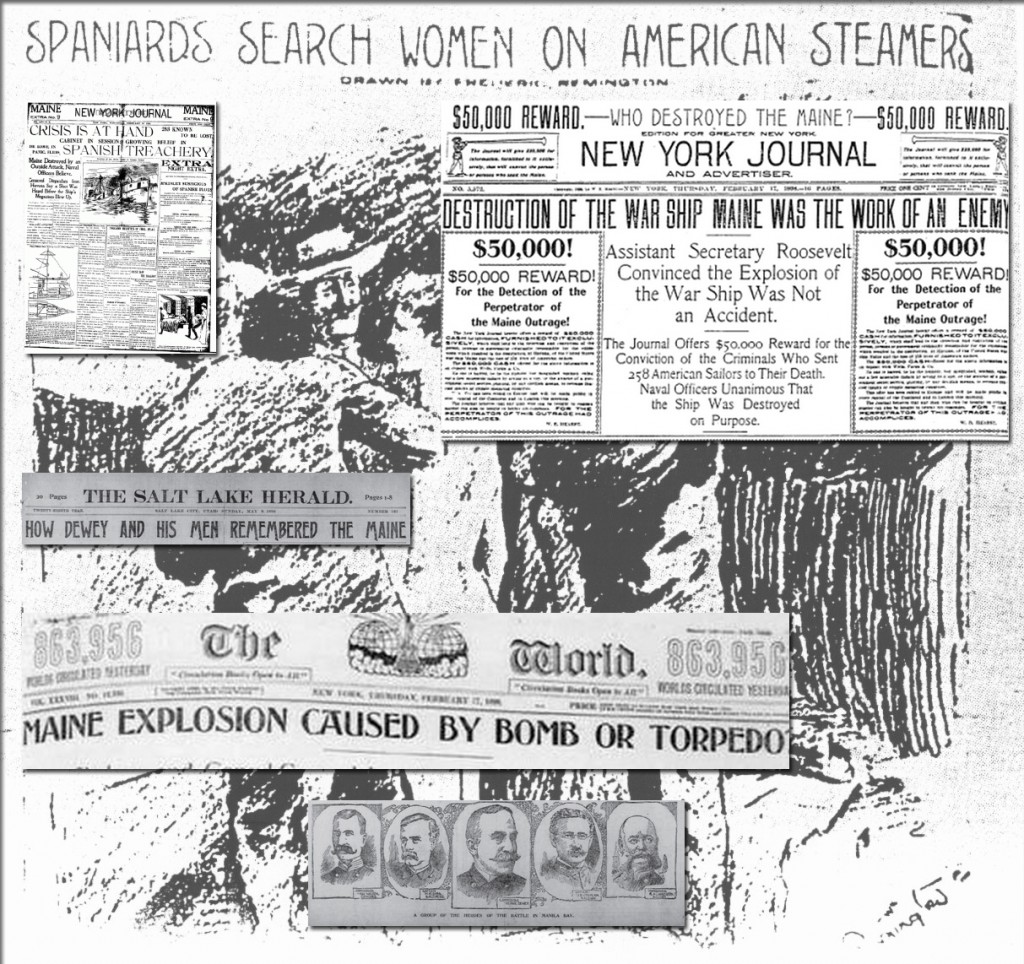 Newspaper Reaction to the Sinking of the Maine

The week before I started my job at the Naval Historical Foundation, my wife and I took a trip to New York City. We were thrilled to once again see all the sights Gotham has to offer. One particular destination, however, stood out above all others. I plotted it for months. While my wife pined for the interesting shops and vittles around Manhattan, I couldn’t wait to get to the southwest tip of Central Park at Columbus Square. Resting at the entrance to Merchant’s Gate is the Maine Monument, a 44-foot tall structure dedicated to the 260 men who died 116 years ago.  Was it Spanish treachery, American imperialism, or a fire in her coal bunkers?  I hoped my visit would shed some light on the answer.  Walking out of our hotel on 57th street, we hooked a right on Broadway and caught our first glimpse.

The monument was gorgeous.

It was the first time I truly stopped and looked at it. The monument was always there in my previous trips to New York. Casually walking by it at a distance, it was always something to be admired. I never felt the need to truly study it until I began a career in naval history seven years ago. I made a point this time to stop with the other onlookers and tourists nearby. In Warholian fashion, my wife grabbed our camera and started snapping. 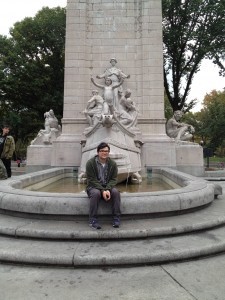 At the Maine Monument in NYC

I can’t say the monument was a huge crowd pleaser that day, even with the prime real estate among the changing leaves of the park. To the typical New Yorker, the monument might be something seen countless times on their way to work or during a walk in the park. To others, it is a passing fancy, a giant slab of gilded bronze and marble amidst a concrete metropolitan jungle at the heart of the city.  After all, how many monuments are erected in Manhattan? There are nearly thirty major monuments and dedications in Central Park alone. I recall seeing a group of construction workers for the upcoming NYC Marathon eating Chinese food on its steps.  That is fine by me.  The genius of memory is its personal flair.  We are not pre-conditioned automatons made to act and think the same. To me, the monument is spectacular.

I have seen many monuments and statues dedicated to the fallen men and women of the United States Armed forces around the country. Gettysburg. Antietam. Iowa Point.  This particular one was striking. The first thing you notice is the very top of the monument’s tower.  Constructed of Maine granite, the tower tells the story of the ship synonymous with the cause of American involvement with the Spanish American War. Sitting atop the tower is the focal point of the monument, a series of figures cast in bronze from the Maine’s salvaged guns.  It depicts a woman riding a seashell chariot with three sea horses.  The woman, Columbia Triumphant, is its central message.  It is clear that victory against the Spanish WOULD BE secured through the heroic sacrifice of the Maine (represented by the youth at the prow of the ship at its base). The names of the 260 men lost in Havana Harbor are inscribed above figures representing the Atlantic and Pacific Ocean.  Centrally scrawled along the tower’s front is this message: 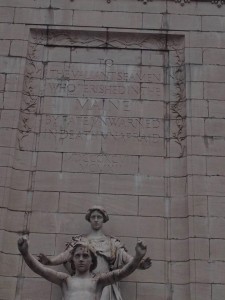 TO THE VALIANT SEAMEN WHO PERISHED IN THE MAINE
BY FATE UNWARNED, IN DEATH UNAFRAID

The surprise sinking of the ship proved the political nudge needed to declare War on Spain.  It was the perfect blend of nationalism and controversy newspapers and yellow journalists at the time craved. In the days and weeks that followed, newspaper tycoons William Randolph Hearst and Joseph Pulitzer pitted against each other to craft the perfect headlines and sensationalized stories about the Maine, its sinking, and the necessity to go to war. Half-based truths were enough to make the streets of the United States run red in the late winter of 1898. Americans wanted swift vengeance for those lost on the Maine and the helpless Cubans suffering at the hands of their colonial possessors. The myth that illustrator Frederick Remington received a telegram from Hearst stating, “You furnish the pictures and I’ll furnish the war,” is as repudiated and studied as the sinking itself.

Either way, it worked.  Hearst and Pulitzer sold countless papers and got the war they desperately wanted. Most historians today do not directly credit jingoistic journalism as the mere cause that forced the hand of President McKinley in April. Their efforts and the public opinion it sparked were a contributing factor, regardless of its direct influence.  The government chose to fight based on economic grounds, while the American public felt it was the newest crusade in the Gilded Age fight for moralism and religious fervor.

Further research on the monument itself indicates a clear victor in the memory of the Maine and her vanquished crew: William Randolph Hearst.  According to the NYC Parks website, Hearst took it upon himself to raise public funds for a monument with the National Maine Monument Fund.  Public subscription proved successful.  Several years and countless donations later, Hearst and the public gathered enough money to erect a monument. It was commissioned in 1901 to H. Van Buren Magonigle and Attillio Picciriilli. Proceedings from the United Spanish War Veterans indicate initial fundraising reached over $143,000, a dollar value of over three million today.

The timing of its completion was perfect.  The monument came about just one year before the outbreak of the First World War.  Foreign suspicion and a xenophobic view of world affairs in the late 19th and early 20th centuries made monuments like the Maine a figurehead of the era. 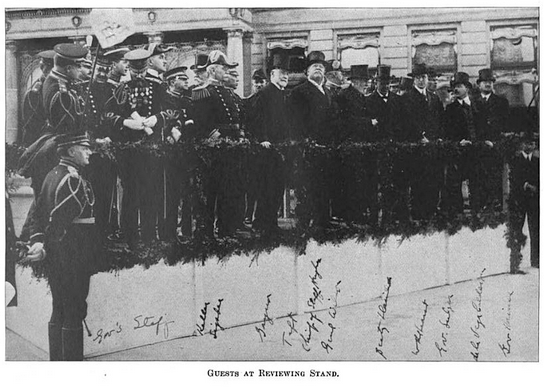 The monument was dedicated on 30 May 1913 to a host of government officials and naval regalia.  According to an annual report by the Scenic and Historic Preservation Society, a series of ceremonies were held along Central Park West, followed by a military parade that included a Cuban band, soldiers and sailors of the NY National Guard, and a detachment from the cruiser Cuba.  Rear Admiral Charles D. Sigsbee, commanding officer of the Maine in 1898, also spoke at the ceremony.

Ex-President and gunboat diplomat Howard Taft was also among the honored speakers and attendees there.  The introduction to his speech before the crowd spells out the memory of the Maine and its respected place in history today:

“The Monument we dedicate to-day is an enduring witness of three facts.  The first is the gratitude that our country feels toward the men who went down on the Maine, in that they gave up their lives in her service.  The second is the birth of a new people and the founding of a new nation through our disinterested aid and sacrifice.  The third is the expansion of this nation into a wider sphere of world usefulness and greater responsibility among the nations than ever before in its history.”

This does not mean the monument came without disdain or controversy. A small portion to Volume 46 of the Literary Digest in 1913 conveys the feeling felt by some in the art world after the monument’s erection.  Included in the document is a list of central complaints:

“Some say the color of the pink marble is too garish; some, the figure at the top is dwarfed by those at the base; others, that it is badly placed.”

A representative of the Fine Arts Federation reported to The Evening Post a rather curious interpretation of the monument:

“The first consideration in designing a   monument should be bulk, mass, composition-detail comes second  [. . .] You must take the whole from a distance, and if you get the impression that it is well balanced, then the designer has won his most important point. And that is where this monument has failed.”

The anonymous poster concludes his review of the monument as “clumsy and badly drawn.”  It was the Federation after all that led protests against the monument. Leon Dabo, a prominent tonalist landscape painter, stated the monument was architecturally and constructively “cheap” and “therefore bad,” comparing the pink stone to “ice cream.”

Protest and disagreement of the aesthetics within the art community faded. The monument remains.  For a student of naval history and its correlation to American memory, it is a beacon of both questions and answers to one of America’s most significant maritime disasters.

Other monuments to the Maine exist. Notable examples include those in Key West and Havana.  Yet the one I visited in October 2013 is by far the most striking example of why the ship that lost so many still deserves attention and contemplation today.