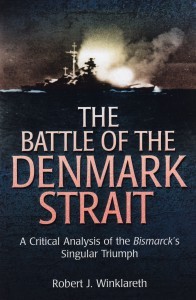 The fateful encounter between the Bismarck, Prinz Eugen, Hood, and Prince of Wales at 0600 on the morning of 24 May 1941 midway between Iceland and Greenland has drawn the attention of numerous authors and analysts. It even inspired a now-classic film. The circumstances of the battle and the shockingly sudden destruction of Hood—arguably the most gracefuland beautiful of all capital ships built in dreadnought style—ensures that generations of students of naval warfare have avidly read all they can find about the ships involved, the battle itself, and the aftermath.allion, Ph.D.

Robert J. Winklareth’s book fits well within a historiographical pattern of works dating back to Russell Grenfell’s The Bismarck Episode (1962), progressing through such informed works as B. B. Schofield’s The Loss of the Bismarck (1972), Ludovic Kennedy’s widely popular Pursuit (1974), and Freiherr von Mullenheim-Rechberg’s survivor’s memoir Battleship Bismarck (1980).  These, of course, are but a fraction of the works dealing with the battle and the ships involved, and are distinct from the broader naval accounts of the action and its place within the history of the Kriegsmarine, the Royal Navy, and the larger naval history of the Second World War.

Where Winklareth’s book differs from others is in the author’s impressive effort to determine exact positions, firing angles, and firing effects. This is based on a technical analysis of the imagery of the engagement, the surviving documentation of vessel movements, speeds, headings, and the recollections of participants. He offers a salvo-by-salvo analysis of the battle from the moment of contact. He concludes that Bismarck hit Hood exactly at 0600 with a single 380mm shell that penetrated its aft armored side below the aft turrets, detonation ammunition stored in a magazine, most likely a 4-in. secondary armament magazine that then triggered the detonation of Hood’s aft 15-in magazines (p. 145).

This is, incidentally, not a surprising conclusion, as written by previous authors. What is interesting is his discussion of how the respective sides came to the point that, seconds before 0600, Bismarck reached a position where its firing solution enabled the fatal hit.

He then repeats this detail of analysis in following the encounter with Prince of Wales and then the subsequent disappearance, discovery, air attack, and final Götterdämmerung of Bismarck itself at the hands of the Fleet Air Arm and the surface combatants of the Royal Navy.

Winklareth’s book is highly speculative, as it is based upon the author’s insights and vigorous argument. Readers are cautioned that it is one historian’s view, but the view of an individual who went to uncommon lengths to buttress his argument with analysis and justifications, including many diagrams and textual explanations.

Not all readers will appreciate that the author covers the battle from the moment of interception to the breaking of contact in little more than 51 pages of a 336 page work, and that the actual exchange of fire between Bismarck and Hood is covered in little more than two pages of text (pp. 142-145, p. 144 being a page of photographs).

This reviewer appreciated that author Winklareth placed the action within a much broader context, including the respective development of capital ships in the British and German navies, the technical characteristics of each ship and its critical systems (sensors, armament, and performance), what happened to lesser vessels and forces, and what happened afterwards to the major vessels involved on both the German and British side.

Winklareth is convincing in his writing even if the book becomes extremely detailed at times. This is a work that aficionados of naval engineering and gunnery will particularly find stimulating.  He tends to overwrite on occasion.  One example occurs at the beginning of the book. He claims that “The Battle of the Denmark Strait was undoubtedly one of the most famous and most important naval battles of World War II [and] is perhaps the most documented event in naval history.” (p. 11).

It was certainly famous, but “most important?”  Assuming either outcome—Bismarck sinks Hood or Hood sinks Bismarck—it is hard to imagine that either would have dramatically transformed the course of naval warfare in the European Theater of Operations. Had Bismarck reached St. Nazaire, it is likely that Operation Cerberus, the famed “Channel Dash” in February 1942 commanded by German admiral Otto Ciliax, might have consisted of Bismarck leading Scharnhorst, Gneisenau, and Prinz Eugen through the Straits of Dover and into the North Sea. This force was powerful enough to add further to British woes, but little else. And what of that “most documented event in naval history?” Is documentation for this action more thorough than documentation for Jutland, or Midway, or even for the terminal encounter IJN Yamato had with naval aviators in April 1945? Hardly.

The Battle of the Denmark Strait features evocative photographs and maps, excellent diagrams and drawings, and a very useful bibliography and reference to key documents from Germany and Britain. In somewhat dated fashion, the author has employed numerous pencil drawings of his own to illustrate ships, aircraft, and actions during the battle and afterwards. While he undoubtedly has a fine drawing style, most of these are dwarfed what is shown in the photographs.

All in all, this is a most useful perspective, and if not completely convincing, the book is a worthwhile work that will both inform and stimulate its readers.

Dr. Hallion has been a previous contributor to Naval History Book Reviews.