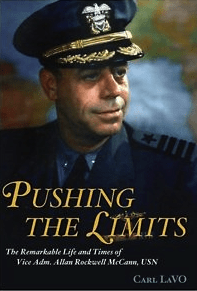 Those who study the United States Navy submarine service have encountered in their readings a mention of the McCann Submarine Rescue Chamber. This book is a biography of Vice Admiral McCann, who played a major role in shaping the United States’ submarine force and anti-submarine force during the 1940s. Unfortunately for the author, Admiral McCann left no trail of documents recounting his thoughts concerning his service in the U.S. Navy.  Carl LaVO had to craft his book using accounts written by others who served with the Admiral, or pry out facts about McCann from official and non-official accounts of actions and events he was involved in. Due to these limitations, the author admits that he was never able to know McCann as a man.  He was able to record his accomplishments and the place he deserves in the history of undersea exploration and warfare.

The book is less a biography of McCann and more a recounting of various U.S. Navy events he was involved in between 1917 and 1950. The time line presented in the book is not continuous and skips various periods within McCann’s naval career. McCann is always in the background to the greater story being told.

Four topics within the book highlight the failure to bring McCann to life. The first is the salvage of USS Squalus in which McCann was involved. We know what happened during the salvage operation, but we never encounter the reasoning why McCann and Momsen undertake certain actions. Second, the author, in covering the period between 1941 and 1943 when McCann commanded SubRon 6 in the South Pacific, devotes almost all of his text to the problem of the malfunctioning torpedoes fired by USN submarines.

Unfortunately, we never learn McCann’s thoughts concerning the failure of his submarines to sink enemy ships. The author made no use of submarine After Action Reports and the comments senior officers attached to these reports to flesh out our understanding of McCann. In fact, there is almost a total lack of information throughout the book on McCann as a commanding officer. The third is the failure to develop the topic of McCann as commanding officer of Tenth Fleet. The fourth incident concerns his tour of duty as Inspector General of the Navy during the “Revolt of the Admirals.” The account of McCann’s IG raid on Arleigh Burke’s Op-23 office deserves a chapter of its own, not just two pages.

While the book is very readable and contains a fountain of information about the USN during the period under discussion, it fails to turn Admiral McCann into a real person who the reader can evaluate as a man and a leader. There are also a number of errors of fact within the book, such as McCann made use of carrier based B-24 Liberators bombers to conduct anti U-boat patrols.