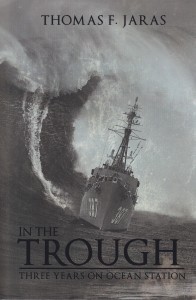 This book drew my attention because of my time in the U.S. Coast Guard Reserve in the 1960s. Between 1940 and 1980, the USCG had Ocean Station vessels in the Atlantic and Pacific performing a variety of national defense initiatives. These included search and rescue, communications, and aids to navigation missions in hazardous weather, sea, and ice conditions.

Lieutenant Thomas F. Jaras mentions Coast Guard personnel at the U.S. Navy refueling station on Adak Island in the Aleutian Islands. He revealed that his dress blue USN uniform had Coast Guard origins, one of the author’s many humorous anecdotes.

Jaras was an officer on the USS Vance (DER 387), where he stood bridge watch in treacherous seas with forty to ninety foot wave heights, caught in the kinds of trough vividly illustrated on the book cover.

The Vance, according to the author, was a WWII-era radar picket ship “resurrected for a modest role in the Cold War.”  Vance was assigned to Operation Deep Freeze in the Antarctic Ocean.  It was in the North Pacific along the Distant Early Warning Line during the early 1960s. Jaras experienced the challenges of mid-ocean seas with infrequent visits ashore between Hawaii, Australia, New Zealand, Japan, Alaska, and several smaller insular sites.

Jaras describes gut-wrenching seasickness, the hull rolling over to a dangerous fifty degree angle, and the bow submerging as enormous waves washed over the decks and bridge. He describes a mission “in the remote northern Pacific,” with crews and vessels serving as “Cold War sentinels […] guarding the United States against nuclear attack.” Loneliness and introspection fueled his memories, writing nearly fifty years after his naval service.

Jaras described the Vance as a “durable World War II relic […] the worst riding ship in the U.S. Navy…” that could “remain at sea longer than any USN ship before there was a nuclear fleet.” Jaras spent “three years before the mast” in “a love-hate relationship with the USS Vance” on a duty assignment he regrettably volunteered for.

Jaras described the personnel specialties and missions carried out on the Vance (command responsibilities, engineering, supplies, gunnery, navigation, seamanship) in the “small steel cocoon” of the destroyer escort picket ship.  He also chronicled critical dry-dock repairs, and infrequent liberty excursions. Complexities between officers and the responsibilities of leadership and coordination between commissioned ranks and enlisted personnel were honestly described and evaluated.

Jaras acquired Officer of the Deck, Combat Information Center, and engine room responsibilities on the long Pacific missions between the Antarctic and Arctic waters, longing for release from his seagoing “prison.” The ecumenical officer was never comfortable with the military caste system of privilege that separated officers from galley “servants” and enlisted personnel, whose skills and professionalism he respected.

He admired senior petty officers and chief petty officers who knew more than he did about shipboard technology and seamanship.  He especially admired those officers who emerged from the enlisted ranks. Perhaps his laid back (but conscientious) attitude came from his 15 weeks of OCS training compared to the more extensive U.S. Naval Academy and NROTC training. Nonetheless, Jaras respected the service, his ship, and good officer and enlisted leadership skills.

The book photographs are interesting. The author’s background and sources are stated in the Preface and Acknowledgements. The book could use an Index.

Jaras’s recollections about the specialties, challenges, and responsibilities required of enlisted and commissioned personnel reminds readers of the excitement, rewards, sacrifices, and danger navy and military members have always faced.