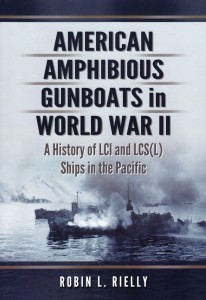 The sub title of this work, A History of LCI and LCS(L) Ships in the Pacific, is a more appropriate title for the subject. With the exception of Rielly’s previous book on LCS(L)’s, very little (if anything) has been written about these two types of ships/craft. Rielly’s book does them complete justice in his included text and illustrations. Unlike most books of this type which stop at the conclusion of their U.S. Navy service, this book continues on with each ships service, especially the LCS(L)’s, (later LSSL’s) in their French, Japanese, South Vietnamese and/or Philippine service. Rielly is to be congratulated for an extremely well done and researched book.

Samuel Loring Morison is the grandson of the late Rear Admiral Samuel Eliot Morison. A naval officer in the Vietnam War and naval historian in his own right, he has been in the naval history field for 50 plus years.