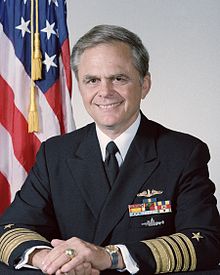 “Kin had the intelligence, integrity and industry in a measure you rarely see. He had the ability to voice the unpopular truth, to say, in a gathering, what others wished they  had the nerve to utter.”

“Smart, no-nonsense, dedicated, always focused on the job.  first classmate to be selected for flag rank; only one to make four-stars”

We would like to acknowledge the passing of a friend and Life member of the Naval Historical Foundation for 26 years, Admiral Kinnaird McKee.

McKee graduated from the Naval Academy in 1951 and served within the Submarine Force for several tours. Selected as a Flag Officer in 1972, he served as the superintendent at the U.S. Naval Academy during its transition to a co-ed institution. He later relieved Admiral Rickover as Director Naval Reactors. He retired from the Navy in 1988. McKee was a strong supporter of naval history and served as a commentator in a 2002 submarine history symposium (co-sponsored by the Naval Submarine League and the Naval Historical Foundation) with fellow Director Naval Reactors Admirals Bruce DeMars and Frank “Skip” Bowman to discuss the legacy of Adm. Hyman G. Rickover. McKee passed away on December 30, 2013.

Below is an excerpt from a biographical interview by David Winkler with Admiral Kinnaird McKee conducted on March 21, 2000. Admiral McKee discussed his “unusual tour” commanding the experimental submarine X-1 with NHF historian Dr. David Winkler.  McKee regarded his time aboard the X-1 as his favorite tour in his long and illustrious career.

McKEE:  As I understand it, in the period shortly after the war, there were a number of new submarine applications under consideration.  The submarine community decided it would be a good idea to borrow one of the British X-craft to see if it would be useful to our Navy.  Those small submarines carried what were called side charges; big mines.  They also had diver lock-out capability.  The crew included qualified divers.  Those divers would use hydraulically-operated net cutters to enter an enemy harbor, cutting their way through anti-submarine nets, so the boat could enter and place its mines underneath the target ship.  The mines were timed to allow the delivering submarine to escape before the explosion.  In practice, they rarely did.  The crews were usually killed or captured.  The Italians also had small submarines, as did the Germans and the Japanese.  Anyway, back to my X-1.

As I understand it, arrangements were made with the Royal Navy to borrow one of their X-craft.  As the story goes, one or more politicians from New York became interested in the acquisition decision.

Fairchild Aircraft offered to design and build an X-craft that would be faster and dive deeper, but they had never built a submarine.  They were an aircraft manufacturer.  They got the contract, and spent several million dollars on the project to create an X-craft.

Fairchild did undertake to build a very sophisticated small submarine.  The configuration was different.  It had no bow planes, only stern planes.  It had a Hydrogen Peroxide Diesel engine.  In fact, it was a Hercules truck engine that ran on air and Diesel fuel on the surface (like any other Diesel engine) but substituted the decomposition products of Hydrogen Peroxide (Oxygen and Steam) in about the same proportion as Oxygen and Nitrogen in air for submerged operation on the engine.  Logical.  The theory was okay.  The boat would run faster submerged than it could on the surface.  It had a longer submerged range and was very quiet.  The engine was beautifully sound-isolated.

When I received orders to the boat, it was in Portsmouth Naval Shipyard.  After I relieved Red Hanlon, I was told by the squadron commander that I probably would not be there very long.  “We’re going to put that thing out of commission; it doesn’t work.”  That upset me.  This was my first command and they were going to put it out of commission?

McKEE:  Initially the engine worked very well.  We went to sea, and made what I was told was the first successful deep dive for that small submarine.  We thought our problems were over, then a few days later the other end of the boat blew up.  That was the end of its career as a warship.

What had happened was this: The Hydrogen Peroxide (90% unstabilized) was contained in a polyvinyl chloride bag in the bow compartment.  There was an arrangement by which that compartment was pressurized to send Peroxide back to a catalyst chamber where it decomposed into Steam and Oxygen for submerged operation.  The boat had had such trouble before our overhaul that the bag apparently had never been fully emptied and refueled.

After the explosion we also concluded that the bag had simply been in place too long.  We were running it hard.  We were collapsing the bag and inflating it as we burned fuel and replaced it.  We had just come back in from a demonstration in the river.  We refueled, then left the boat moored to the barge and went home.

The bow blew off.  The bag had become brittle and cracked.  It contained ninety percent unstabilized Hydrogen Peroxide.  The Peroxide was heavier than water, so it immediately went to the bottom of the compartment.  A pipe connected to the bottom of the compartment to pressurize it and move the Peroxide to the catalyst chamber was silver-brazed.  Silver was the catalyst used to initiate decomposition of the Peroxide into Steam and Oxygen, so when the Peroxide collected around the silver-brazed joint, the resulting rapid decomposition blew the nose off the boat.

Fortunately the boat was bolted together.   The nose was bolted to the operations compartment just like a torpedo.  There was a solid bulkhead protecting that compartment.  When the explosion occurred it sheared all the forward section bolts and the nose came off.  Chuck Swanson was eating supper nearby.  He saw the nose sail through the air and sink.   The boat quickly filled with Peroxide fumes and smoke.

I was home eating supper when all this happened.  The phone rang and a second class petty officer (who was the duty officer) said, “Captain, you’d better get down here quick!”

I did indeed get down there quickly.  The boat was still afloat when I got there, so I jumped in, started the engine and ventilated the compartment.

After the accident, the squadron commander sent a team to investigate.  I wasn’t smart enough at the time to realize that I might have been in a heap of trouble.  After all, I was the skipper, and my submarine blew up.  His staff scrubbed us hard, but we came away with a clean bill of health.  We had the necessary procedures, a solid training program, and good records.  Everything was in good order.  I was relieved, and went off to Nuclear Power School.  The boat went to Annapolis where the Engineering Experiment Station removed all of the Hydrogen Peroxide systems and ran it as a conventional Diesel-electric submarine.  That’s where it stayed until it settled in the Naval Academy yard.

That was the end of my X-1 tour.  I wouldn’t take anything for having had that first command.  It was an exciting time.  And I had tremendous support from people I didn’t even know very well.  They encouraged me to do whatever I wanted to do to make it work.  That was a unique situation.