(Editor’s note: This is the 21st in a series of blogs by Norman Polmar—author, analyst, and consultant specializing in the naval, aviation, and intelligence fields. Follow the full series here.) 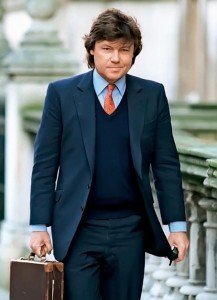 
Nigel West is not a spy.  Some people think that he is.  British journalist and documentary film producer Jon Ronson, in his book Them: Adventures with Extremists (2002), described him:

He wore a blue blazer and an open-necked shirt.  His hair was bouffant, and his glasses were tinted.  All in all, he cut a dashing figure….He was the image of a debonair gentleman spy.

But there is no Nigel West.  It is the pen name of Rupert Allason.  He was born in London, an archconservative, and from 1987 to 1997 the member of Parliament representing Torbay, in southwest England, for a decade.   Of course, he sat in Parliament as Rupert Allason.

He lost his seat in Parliament in the 1997 elections when the Labour Party was swept into power.  He was defeated by twelve (!) votes.

(On the evening of the election, May 1st, 1997, my wife, Beverly, and I were in London dining with a group of Conservative friends.  As we kept learning of the details of the Conservative defeat the whole table continued to moan with disappointment.)

Rupert’s pseudonym was created on the spur of the moment as he was on the telephone arranging to interview convicted Soviet spy John Vassall.  He thought that was a rudimentary precaution that might be appropriate for the occasion.  (Vassall was a British Admiralty clerk who spied for the Soviet Union; in 1962 he was arrested, confessed, and tried.  He served ten years of an 18-year prison sentence.)

Thus, under the name Nigel West, since 1980 Rupert has written or coauthored more than 30 books—two are novels—about espionage and spies.  Several of these books are considered classics in their time.  And, he edited the massive anthologies The Faber Book of Espionage (1993; 610 pages) and The Faber Book of Treachery (1995; 576 pages).

Of course, not everyone likes or agrees with Rupert and what he has written. He has sued or been sued on several occasions. Billionaire publisher Robert Maxwell sued him for libel.  Representing himself, Rupert won the Maxwell case.  He lost in a suit against British journalist Alastair Campbell, whom Rupert sued for malicious falsehood.  But in a retrial he was awarded £1,000 in damages plus most of his costs.  There were several other legal battles; all of which, I believe, he won or in which he eventually was vindicated.

Rupert asked me to come to London to testify in one of his cases, but, as I recall, it was settled out of court and I didn’t appear in the witness box. This related to the Amerasia affair of the 1940s, in which that magazine published classified U.S. Government documents.  Several of the magazine’s staff and writers were current or former members of the Communist Party.  Among those involved were a State Department official and a Naval Intelligence officer.

I had first met Rupert when we both were attending a conference at the National War College in Washington.    I walked up to him and started to introduce myself.  He interrupted, looking at my name tag, “I know who you are and I’ve read some of your books.”

After that Rupert and I met a few times, and kept in contact via e-mail.  In 2004 he kindly wrote a glowing foreword for the second edition Spy Book: The Random House Encyclopedia of Espionage, which I coauthored with Thomas B. Allen.  Mentioning two previous, significant books of this type, Rupert wrote that they “neither compare nor come anywhere close to achieving the comprehensive nature and intrinsic accuracy of this updated edition of Spy Book.”

My wife and I attended a book party for him in London, and whenever he came over to the United States we would try to meet for dinner.  Our last dinner was on Saturday evening, December 7th, 2013, at Athena Pallas in Arlington, Virginia.  But as my wife, Rupert, and I sat and dined, talked, and drank wine, I made a startling discovery:  Rupert drank white wine, even with lamb!

We still e-mail.  And, I can certainly accept his obsession for drinking white wine with lamb.