(Editor’s note: This is the 23nd in a series of blogs by Norman Polmar—author, analyst, and consultant specializing in the naval, aviation, and intelligence fields. Follow the full series here.) 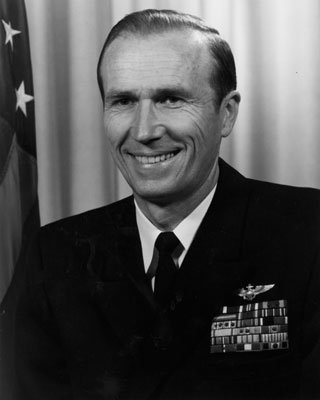 I knew Don Engen for a very brief period. Still, he had a significant influence on me.

Vice Admiral Engen dropped out of college shortly after the Japanese attack on Pearl Harbor and enlisted in the Navy.  He entered the Navy’s aviation cadet program in 1942.  He flew an SB2C Helldiver attack aircraft from the carrier Lexington (CV 16) in 1943-1944, taking part in the savage battles for Leyte Gulf.  In this period he was awarded the Navy Cross-second only to the Medal of Honor-for pressing home an attack against a Japanese warship. After the war, he was a civilian test pilot for Consolidated Vultee and studied at the University of California at Los Angeles.

He returned to active duty and became a fighter pilot, seeing combat in the Korean War, flying from the Valley Forge (CV 45), the first carrier in action in that conflict.  Subsequently, he attended the Empire Test Pilots School in Britain and served in a variety of naval aviation billets, both ashore and afloat.  After attending the Naval War College, he commanded the carrier America (CVA 66) in 1966-1967.  The carrier was in the Mediterranean during the 1967 Arab-Israel conflict.  When ordered to launch aircraft when the U.S. spy ship Liberty (AGTR 5) was under attack by Israeli air and naval forces, Engen refused.  His ship was in the midst of a nuclear weapons drill, and did not want to conduct flight operations until all nuclear weapons were secure in the magazines.

(The carrier Saratoga/CVA 60, also in the Mediterranean, did launch several aircraft—with conventional weapons.  They were recalled when it became known that the Liberty had been mistakenly attacked by Israeli forces.)

After commanding the America, Engen served in several key billets in the Pentagon and in the fleet.  He retired in 1978 as a vice admiral.

I met Engen on 31 January 1996, at an all-day seminar for aviation historians sponsored by the Association of Naval Aviation (ANA).  Early in the session, the attendees made brief comments about their on-going projects.  Engen introduced himself and said a few words about plans for forthcoming changes at the museum that he foresaw when he officially became director.   When my turn came, I said a few words about my aviation projects.  Turning to Engen, I asked, “When are you going to put the NC-4 on display at the museum?”

The Glenn Curtiss NC-4 had been the first aircraft to cross the Atlantic, in 1919.  Congress later passed legislation directing that the aircraft be placed on display at the museum, when the structure was built.   Engen explained that the NC-4 was in the museum collection, but was on loan to the Museum of Naval Aviation in Pensacola, Florida.  Okay. I again asked when it was going to be placed in the Washington museum.  The chairman of the session suggested we take a coffee break.

Engen and I again met almost a year later—on 23 January 1997—at the next ANA session for aviation historians.  The program was the same.  After Engen spoke, I again asked him about the NC-4.  He again said that the aircraft was in the museum collection, on loan to Pensacola.  I pushed harder.  He pushed back.  Oh, well.

Someone from the museum who was with Engen asked that I make an appointment to see him.  It was some time before we met.  When we did, he asked me to accept the Admiral Ramsey rotating history chair at the museum.  The reason for his invitation, he explained, was that my book, Aircraft Carriers: A History of Carrier Aviation and Its Influence on World Events, was an important publication.  Having been published in 1969, it was out of date.

If I accepted the Ramsey chair, he wanted me to revise and update the book.  I would receive a significant stipend, plus some expense funding.  After further discussions, I accepted and became the National Air and Space Museum’s Ramsey fellow on 1 October 1997.

I learned a lot about aviation during the next year.  I came into the museum a couple of times a week, carried out research for the book revision and met and got to know many of the museum staff (some of whom remain good friends).

Increasingly, I became the “naval expert” for the staff, answering questions about naval aviation and identifying naval aircraft in photographs.  My research for Aircraft Carriers included a trip to Russia, partially paid by the museum, for discussions of Russian carrier programs at the Nevskoye warship design bureau in St. Petersburg.  (In that period I regularly visited Russia to work with the two major submarine design bureaus, Rubin and Malachite.)

From time to time, Engen would drop into my office, sit down on the couch, and talk about museum publications.  He wanted a new series of monographs describing the key icons of the museum—aircraft and spacecraft.  Thus, in my “spare time,” I began researching past museum publications and similar efforts by other museums in the Smithsonian family.  My main effort at the museum was Aircraft Carriers, which was successfully revised, updated, and published in two volumes (2006, 2008).

As my tenure as the Ramsey fellow drew to a close, Engen offered me a position at the museum.  For several reasons, I could not accept.  In response, he asked if I would be the (paid) ombudsman for the museum.  I would come in once a week, look at exhibits, talk to the staff, mix with the approximately nine million (!) annual museum visitors, and recommend possible changes and improvements.   I accepted with alacrity.

Engen continued to fly and loved soaring in gliders.  The museum staff and many others were shocked when, on 13 July 1999, he was killed when the powered-glider he was flying in broke apart over Nevada and crashed.  He was wearing a parachute, but to no avail.  At the time he was 75-years-old.

I knew him for a very short time.  He impressed me tremendously—his intelligence, dedication, personality, and attitude.  With respect to the last, the only plaque mounted on the walls of his office was from the maintenance staff of the museum, thanking him for recognizing its efforts.  He encouraged the staff to “mix” with visitors, and tried to do so every day he was in the museum.  And, of course, he was largely responsible for raising the funds to construct the massive F. Udvar-Hazy annex to the museum at Dulles.  His legacy includes an excellent autobiography, Wings and Warriors: My Life as a Naval Aviator (1997).

Don Engen was an outstanding person in many, many ways.  I am in debt for the brief times that we met, talked, and schemed together.