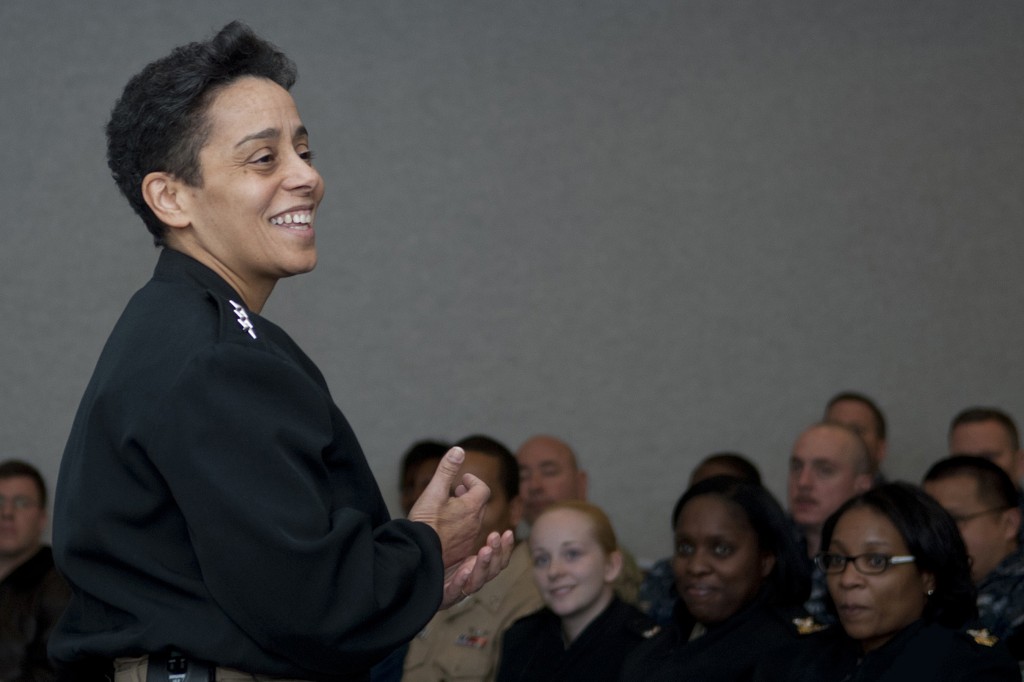 “Men have the luxury of being average.  When you walk in as a woman, that assumption does not come with you.” –  Michelle Howard, Commander, USS Rushmore, Time Magazine, 2000.

This blog discusses American naval history. History, by definition, is a study of the past. It is a very rare and special treat when one may cover history unfolding in the present. The recent decision by President Obama to nominate Vice Admiral Michelle Howard to a four star position is such an occasion.

2013 is very much the “Year of the Military Woman.” The appointment of Army General Ann Dunwoody in 2008 and Air Force General Janet Wolfenbarger last year are precursors to Vice Admiral Howard’s promotion.  This year, President Obama appointed Christine Fox as the acting Deputy Secretary of Defense, making her the highest-ranking female in national defense history.  Fox was the inspiration for the lead female character in the 1986 blockbuster film, Top Gun.

Our partners at the US Navy Memorial Foundation launched a yearlong exhibit in April highlighting the history and heritage of women in the armed forces.  The Naval History and Heritage Command has an excellent online companion to this fascinating subject of social and military history.

VADM Howard is also a woman of many firsts. A constant barrier-breaker for color and gender in the military, Howard will become the first female Navy four star and the first female VCNO. From the fleet to the Pentagon, Michelle Howard has one of the most impressive resumés in the armed forces today.

Vice Admiral Howard made a name for herself through her hard work and dedication within the surface warfare community. At the time of the 2009 Somali Pirate Crisis with the Maersk Alabama, Howard was the first African American and second woman to lead an expeditionary strike force. Aboard her flagship USS Boxer (LHD-4), she led Task Force 151 to the successful and safe rescue of Captain Philips and the crew of the Alabama. In an exclusive interview with Essence in 2009, Howard recounts her calmness and poise in the face of crisis:

“We had an American citizen trapped on a life raft with pirates. In that circumstance you cannot even sleep. How could I possibly sleep when that poor man is out there, not knowing if he is going to live or die? How could I sleep when he doesn’t know if he can get out of there alive?” 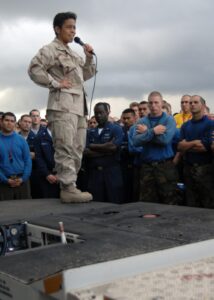 Howard came out of the sleepless week a humble national hero. Following her tour as commander of TF151 and TF51, she served as the Maritime Task Force Commander of BALTOPS, a multinational naval exercise that operated under the 6th Fleet. Her latest shore assignment plants Howard in DC as the Deputy Chief of Naval Operations for Operations, Plans & Strategy (N3/N5). Her appointment as the Vice Chief of Naval Operations would put her the second highest military position in the United States Navy.

VADM Howard has a deep interest and fascination with history.  Earlier this year, she was the keynote speaker at a NHF-sponsored reception commemorating the Battle of Lake Erie during the War of 1812.  She is also a well-established advocate for progress, speaking to junior sailors about the many achievements of African Americans since the American Civil War and emancipation. She also understands the difficulty and responsibility of her high position in the military. She stated in a Chicago Defender article today that “sexism within the service, and racism outside the service” are still obstacles to overcome. The United States Navy has a long history with social change dating back to the American Revolution.

Women in the Navy like VADM Howard are the reason why these winds of change are pointing in the right direction. We can only stand by and witness these historic events take place. That is something that we can all stand up and be proud of. Bravo Zulu, VADM Howard.