Today, we commemorate the 151st anniversary of the sinking of the ironclad USS Cairo.  The Cairo sank in the river during the 1862 Yazoo Pass Expedition.  This article is the beginning of a series of articles in partnership with the Civil War Navy Sesquicentennial, an official U.S. Navy commemoration. 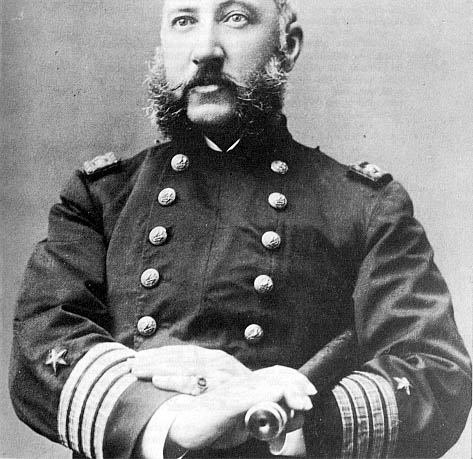 
Americans today revel in stories of people “who were there.”  Those that saw it happen, good or bad, and lived to tell the tale.  Think about the fascination we still have with Pearl Harbor and the ever-decreasing list of survivors, now seventy-two years later.  We love stories of men and women who, like the fictional character of Forrest Gump, were in the “right place” at the “right time.”  We also cannot help reading stories of those who do the exact opposite.  Some simply find themselves always at the short end of the stick.

The Civil War navies have such a man.

To borrow a phrase from Henry Carlisle’s 1984 study of Captain George Pollard of the whale ship Essex, Rear Admiral Thomas O. Selfridge, Jr. is the “Jonah Man” of the Civil War Navy.  The 1862 destruction of the Cairo is part of the officer’s long relationship with unfortunate events.

The National Park Service refers to Selfridge as “rash and ambitious.”  That may be an understatement.  Born in Charlestown, Massachusetts in 1836, Selfridge came from a proud naval family.  His father, Thomas Selfridge, Sr., was a distinguished naval officer.  Young Selfridge followed suit and graduated from the United States Naval Academy in 1854.  At the outbreak of the hostilities in April 1861, he held a position at the critical port of Norfolk, Virginia. 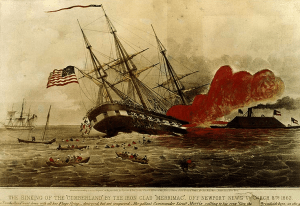 Selfridge took part of the burning of the Norfolk Navy Yard and saved the converted frigate Cumberland from destruction or capture in April 1861.  His first in a series of unfortunate events occurred nearly one year later.  In March 1862, Selfridge was the gun deck officer aboard USS Cumberland at the Battle of Hampton Roads.  On the first day of battle (8 March), his ship fell victim to the ironclad CSS Virginia.  The Cumberland sank with most of her crew in less than one hour.   Selfridge survived the ordeal and took command of the battle’s famed ironclad USS Monitor two days after his encounter with Virginia.  His command lasted four days.  The Monitor served under new leadership for the remainder of the year, meeting its fate in a storm off the North Carolina coast on New Years Eve.  We only have to dig deeper into his 1862 career to discover more misfortune.

His next command was the experimental submarine Alligator at the Washington Navy Yard in August.  Given the surprise and capability of the Virginia and its victims (which he knew from firsthand experience), Selfridge was the perfect candidate to test out the new ship.  The experiments and tests in DC proved to be, in the words of Selfridge, a “failure.”  That vessel, like the Monitor, sank near Cape Hatteras while on its way Charleston, SC.  The vessel is still undiscovered.

Despite his track record, Selfridge received yet another command.  He switched gears and headed west to take command of the City-class ironclad USS Cairo, fresh off of recent success along the Mississippi River.  The ship took part of the opening stages to the Yazoo Pass Expedition.

On the morning of 11 December 1862, Selfridge and his crew assisted two wooden gunboats in their sweep of naval mines (torpedoes) along the interior of the Yazoo, many of them constructed by Confederate naval officer and torpedo genius Isaac N. Brown.  According to HRNM historian Gordon Calhoun, Selfridge thought the crew of the wooden gunboat Marmora were under attack by Confederate sharpshooters.  He proceeded to position the Cairo forward from the rear of the squadron to aid the ship.  This was a mistake.

The Marmora crew were using their guns to detonate a mine in the river.  Selfridge deployed small boats to assist the Marmora.  No Confederate sharpshooters were present, yet Selfridge and the Cairo surged forward.  Moments later, Marmora’s Ensign Walter Fentress heard an explosion coming from under the Cairo.  According to Fentress, he “saw her anchor thrown up several feet into the air.”  The ship quickly sank with no casualties.  The only injury on the day was likely Selfridge’s pride.  To that effect, the incident is given scant mention in his autobiography, What Finer Tradition.

Selfridge went on to command one more ship to its ruin during the war.  The timberclad USS Conestoga sank in a collision with the USS General Price on 8 March 1864, two years to the day from the Cumberland’s demise.  This signaled the end of Selfridge’s wartime tribulations.

Despite his track record during the Civil War, Selfridge kept receiving both ship commands and promotion.  He held several postwar commands until his retirement on 6 February 1898: nine days before the sinking of the USS Maine and the start of the Spanish American War.  He died in 1924.

One might argue, given the circumstances of his commands and the engagements he went through, Selfridge is the luckiest man of the Civil War navies.  George Pollard held two disastrous commands during his tenure as whale ship captain.  Selfridge held two commands at the time of their sinking (Cairo and Conestoga), with two other command positions of “doomed” vessels (Monitor and Alligator) in his resume.  He also survived the sinking of the Cumberland.   He certainly saw his fair share of combat.  It is the responsibility of those like Selfridge who bear the weight of history to sail with its ebb and flow.  In this matter, Rear Admiral Thomas Selfridge is “master and commander.”