Tomorrow marks the 114th Army-Navy football game.  Due to a recent string of success (11 straight victories), Navy holds the current record at 57-49-7.  Navy football did not always dominate the storied rivalry.  During World War II, the rivalry between the Midshipmen and Black Knights was better than ever.

Despite any misgivings the other service academy had against the other, both were fighting for the preservation of democracy and peace.  These games helped many fans on the home front deal with the harsh realities of war.  They were as much about pride and tradition as they were about morale.  Every American came out a winner on the grassy fields of competition.

The first game during the war years occurred on 29 November 1941, several days before the attack at Pearl Harbor. Oddly enough, the program included a picture and caption for the USS Arizona. The captain ominously read, “Despite the claims of air enthusiasts no battleship has yet been sunk by bombs.” This would change just nine days later. Navy won the game 14-6. The program itself remains a prized possession in college sports memorabilia. 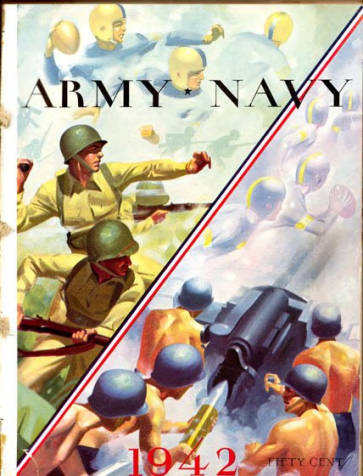 Unlike the 1917 and 1918 cancelled matches, officials felt it important to play the game. The official program for the game is particularly interesting. The movement of the football players mimics that of the soldiers and sailors fighting overseas. With the held of future College Football Hall of Fame Guard George Brown, Navy shut out the Black Knights 14-0.

Midshipmen football coach Billick Whelchel’s best year came in 1943. He posted an 8-1 record. Navy’s only loss went to the National Champion Notre Dame Fighting Irish. The Midshipmen once again defeated the Black Knights 13-0. The game was played in West Point at Michie Stadium.

Changes took place in the final two years of the war rivalry. Whelchel took the success of his 8-1 Midshipmen to the NFL, where he coached the Washington Redskins to a meager 3-3-1 record. The new Midshipmen coach, Oscar Hagberg, was a former Navy football star (1929-1930). Hagberg spent his service in the United States Navy as a sub officer, serving during the first war years aboard USS S-16 and USS Albacore. According to Clay Bair’s monograph Silent Victory, Hagberg’s record during the war got him the position of head football coach. 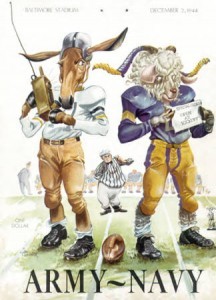 LCDR Hagberg served as the CO of the Albacore from June to December 1943. In that time span, the Albacore saw patrol and convoy service near Brisbaine, Austrialia. During his first patrol, Hagberg spotted four convoys, attacking two. Of the fourteen torpedoes launched during these two attacks, only one hit. After several run-ins with friendly fire on subsequent patrols (several causing damage), Albacore received orders to finish off the wounded Japanese cruiser Agano in November 1943. Unfortunately, Japanese destroyers forced the submarine to fend off a four-hour depth charge attack. The Agano escaped in tow of the Noshiro back to Truk.

LCDR Hagberg ended the 7th war patrol of Brisbaine on 5 December 1943. On his return to port, Hagberg was relieved of command and eventually made his way to Annapolis for his new position.

Hagberg faired better as the CO of the football squad. Although he failed to defeat the Black Knights in his two seasons as Head Coach, his 13-4-1 game record is still admirable. Black Knight coach Red Blaik compiled an offensive and defensive juggernaut capable of taking on the formidable Navy team. The 1944 and 1945 Black Knight squad are still considered two of the greatest college teams to ever play the game. His T-Formation offense helped the Black Knights win three consecutive National Championships, beginning in 1944. Several players from the 1944 and 1945 Midshipmen squad made the College Football Hall of Fame, such as Skip Minisi, Dick Duden, and Don Whitmire. Whitmire went on to command the 7th Fleet during the Vietnam War, attaining the rank of Rear Admiral upon retirement. 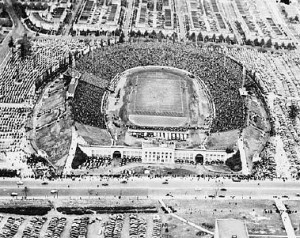 
In that final year of the war, the Black Knights trounced the Midshipmen 32-13 in Philadelphia. The game held over 102,000 spectators in attendance, including President Harry Truman. The Army offense, led by Heisman Trophy winner Doc Blanchard and Team Captain Tom Lombardo. Lombardo was later killed during the Korean War.

The Army-Navy game still ranks among the most celebrated rivalries in sports today. That being said….

An excellent companion post by the Naval History and Heritage Command is available on Navy DoD Live.