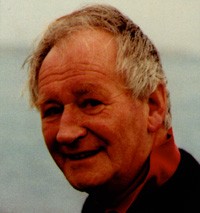 Hamilton himself was a bit of a “late bloomer” in the world of art.  He served in the Queen’s Royal Regiment in India during World War II, worlds away from the battles and campaigns he would later paint.  After starting and selling his business in the post-war years, Hamilton began to research and paint about the Battle of the Atlantic in the early 1970s.  His collection of paintings is on exhibit at the Imperial War Museum aboard HMS Belfast in London.

He began painting the Pacific War when he finished his Atlantic series.  Hamilton conducted research all around the world  (including the Naval History and Heritage Command) to get the most accurate depiction of his 120 Pacific War paintings.  He felt that moments in battle, as harrowing and terrible as they were, should be recorded.  As he said, the war itself was “the greatest conflict at sea that the world has ever known.”   The Pacific paintings are now part of the Navy Art Collection. 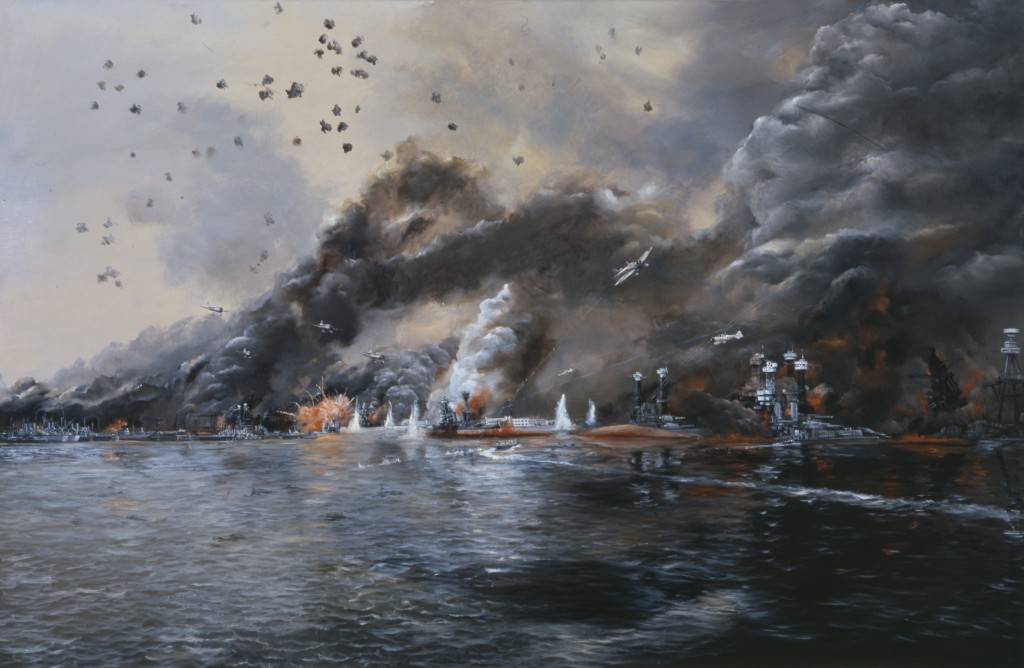 In total, Hamilton painted 204 paintings of the naval war.  Nearly all of them (176) comprise the 1986 book, War at Sea, 1939-1945.  One of his best works included in the book visually recaps the beginning of the Pacific War.  “Battleship Row in Flames” is a monstrous painting (40 in. x 60 in.), widely acknowledged as an accurate and thoroughly researched portrayal of the Sunday morning sneak attack by the Japanese Carrier Striking Task Force.  What you may not know is the story behind its sister painting currently held by NHF.

The above image is a scan of another Pearl Harbor painting (49 in. x 25 in.) done by Hamilton.  You might notice something different or odd about it.  The painting is backwards!  It appears that Hamilton painted the attack scene from a photograph, and the negative of the photo was reversed when printed. 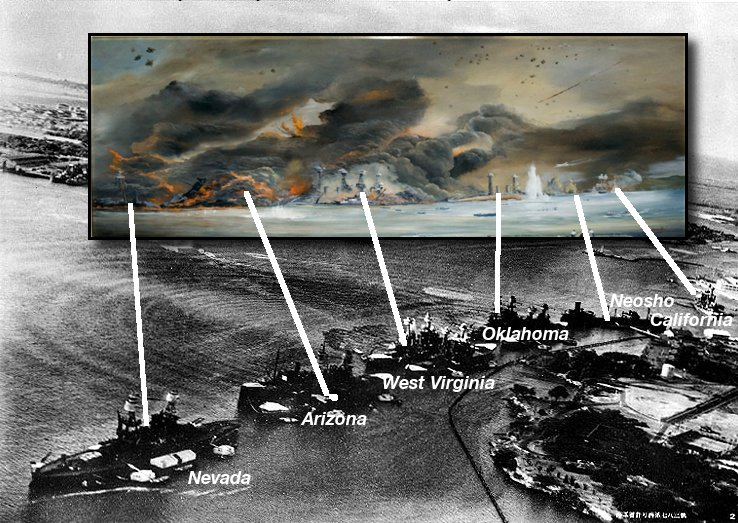 NHHC Image of Pearl Harbor attack. You can see the ships are situated in reverse order.

As you can see here from this graphic, the ships are being attacked on their starboard side.  The ships were actually hit along their port side while anchored near Fort Island facing SW.  Therefore, this image has the ships situated in opposite order.  Unlike the painting included in War at Sea, this error image shows some characteristics unseen in the correct one.  Much of the attention focuses on the Arizona, whose billows of smoke and bright flames indicate the direct hit from a Japanese bomber to her forward magazine.  The contrast of gray and red color draws the viewer’s eyes directly from the middle of the painting to the Arizona.  Because it is reversed, you do not see the famous explosion of the USS Shaw, which is clearly portrayed in the middle left of the correct painting.  Viewers get a wider panoramic image of battle when both are pieced together, from the undamaged oiler Neosho in the reverse painting to the destruction of the Navy Yard fleet in drydock.

It is believed that Hamilton painted this one first, and was allegedly going to destroy it.  Captain Ken Coskey, former Naval Historical Foundation Executive Director, talked Hamilton out of trashing it in the late 80s and early 90s.  Captain Todd Creekman, USN (Ret.), current NHF Executive Director, has in his possession a handwritten note from Captain Coskey about the painting.  “It was a mistake and our friend, the artist, gave it to me, rather than destroy it, because I wanted it,” Coskey states in his note to Creekman.  Harrison went on to paint  the Falklands War and the travels of Sir Ernest Shackleton’s Arctic expeditions in the 1980s.  Hamilton died in 1993, yet his life and legacy in the world of art and history remains.

—————-
Do you like the painting?  Want to own an “unusual” part of American naval history?  Do you have a fondness for turning something “negative” into a positive?  The Naval Historical Foundation is currently seeking those would like to give this interesting “error” painting a new home.  If you are interested, please contact Matthew Eng, NHF Digital Content Developer, at meng@navyhistory.org.