I was excited to hear that the Naval Historical Foundation is working with the Hampton Roads Naval Museum on the 2014 LEGO Shipbuilding Program this coming February. I had a great time at last year’s event (see the story here) and I thought a lot over the past year about a follow-up design. I settled on the aircraft carrier USS Lexington (CV 2), which allows for some interesting and challenging design aspects and a few bright colors. Lexington and her sister USS Saratoga (CV 3) were the Navy’s first fast carriers, and played a crucial part in the revolution of carrier air power during the period between the World Wars. The two ships were built on the converted hulls of battlecruisers, giving them fast speed and a streamlined appearance. What makes these carriers especially unique is their big gun armament – each carrier boasted eight 8-inch guns, mounted in four turrets. No other US Navy aircraft carrier ever mounted such large guns. Lexington, whose nickname was the “Lady Lex,” was commissioned in 1927. Following her groundbreaking work during the years between the wars, she served briefly during World War II, and was sunk at the tail end of the Allied victory at the Battle of the Coral Sea in May 1942.

I started my LEGO design of Lexington just before Thanksgiving. This is the second large scale LEGO ship model I’ve built, so I am still learning how best to approach these projects. I generally find that it works best to start by sizing the main guns. LEGO bricks are primarily block shaped, meaning that there are very few tube shaped pieces to use for guns, and not a lot of variety in size. It can be difficult to find LEGO pieces to mimic the length and bore size of naval rifles and secondary armament. Thus, I like to design my guns and turrets, and then extrapolate the overall hull size from there. The first image below is my initial stab at an 8-inch turret for Lexington, shown alongside a photo of one of her gun turrets after it had been removed and mounted ashore in Hawaii for defense of the islands:


Unfortunately, when I finished this turret, and extrapolated the size of the ship design, I came out with a rather unwieldy eleven foot length. I don’t have enough room in my house for something that size! So, I worked out a few designs at a smaller size, shown below:


These turrets resulted in a ship size of about seven feet – bigger than I had planned, but still workable. You can see that I tried several different pieces for gun barrels, and ultimately settled on the axle pieces shown at right. I started acquiring pieces in early December, and the Lexington has slowly taken shape. One of the biggest questions I’ve tried to solve has to do with color. I have yet to find a color photo of either Lexington or Saratoga during the interwar period. I have found several pieces of artwork, and some highly detailed models, but no actual photography of the ships in color as they appeared before World War II. My chief concern has been the color of the flight deck. The flight decks on these carriers were constructed with wood over steel plating. In black and white photos, the wooden flight deck has a darkish color. In some of the artwork and models I have seen, a light tan color is used – but this does not match up with the darker color seen in the period photos (see a selection of images here).  I’ve used a number of sources for imagery and technical specifications, including The Lexington Class Aircraft Carriers by Robert Stern. This book confirms what I’d heard from a colleague: during the interwar period, Lexington and Saratoga had maroon-stained flight decks, with orange/yellow striping. I’ve decided against using that color (as LEGO doesn’t even make maroon pieces) and I’m instead using a dark brown that looks “woody” to me.

One of the other challenges was to design Lexington’s air group. For most of her lifespan, Lexington embarked biplanes. During the interwar period, those aircraft were generally painted in very bright, almost garish colors. The painting below shows a Boeing F4B-1 fighter circling above Lexington (also note the light brown colored flight deck). These brightly colored biplanes were another reason I chose to build Lexington. Not only does it make the end product more colorful, but it is also educational, as many people aren’t aware that the aircraft seen in those old black and white photos were painted bright colors. 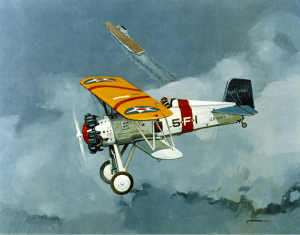 
We’re now about a month away from the contest, and while I won’t be entering to win (given that I work for the Naval History and Heritage Command, and previously worked for the Naval Historical Foundation – the two organizations sponsoring the event) I look forward to finishing up my design and putting it on display for the hundreds (hopefully thousands!) of eager children and their parents who will be flocking to the Hampton Roads Naval Museum for the event. I’ve had a lot of fun building this model, and have learned quite a bit about Lexington. If my design can excite or inspire just one child to learn more about the proud history of our Navy, then that will be the icing on the cake. I don’t want to reveal the full design of the ship until I’m finished later this month, but here’s a sneak preview of a cross section: 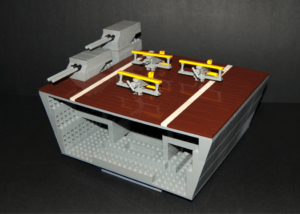 A preliminary cross section of the LEGO USS Lexington model. The finished model will be over seven feet long, and will be on display at the 2014 LEGO Shipbuilding contest at the Hampton Roads Naval Museum.