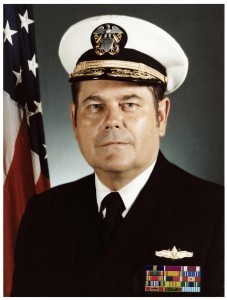 (Editor’s note: This is the 20th in a series of blogs by Norman Polmar—author, analyst, and consultant specializing in the naval, aviation, and intelligence fields. Follow the full series here.)

In the mid-1970s my neighbors in Northern Virginia included Stu and Martha Landersman.  Stu was a Navy captain and a surface warfare officer, assigned to the Office of the Chief of Naval Operations.

One evening, as we discussed “ship stuff,” Stu suggested that I should meet Rear Admiral Wayne Meyer, the newly appointed project manager for Aegis shipbuilding.  Aegis and its associated AN/SPY-1 phased-array radars were the new weapons control system being developed to counter future air and anti-ship missile threats. For the past several years Meyer had served as project manager for the development of Navy surface missile systems and then became the first director of surface warfare in the new Naval Sea Systems Command (established in 1974).

Stu and I met with Admiral Meyer on 21 April 1976, shortly before Stu departed for San Diego to establish the Navy’s tactical training course for prospective ship and air squadron commanding officers.  (Subsequently he invited me out to San Diego on a regular basis to speak with the students about Soviet naval developments.)

In our first and later meetings, Admiral Meyer and I discussed a wide range of ship issues.  I had recently joined the Santa Fe Corporation.  My boss was Dr. D.A. Paolucci, a retired Navy captain , who had been my superior for the previous five years as president of Lulejian and Associates, a defense studies.  When I told him of my conversations with Admiral Meyer his reaction was, “Go market him.”

A short time later the Navy awarded a contract to Santa Fe for my team to support  Admiral Meyer.  In brief, several times a year some of my staff  and I met with the admiral to develop a list of issues related to the Aegis program.  My Santa Fe team would then prepare “white papers” and undertake supporting analysis on those subjects.  Some of the papers were classified and some unclassified.  Some of the subjects, as I can recall, were:

The  feedback  on these papers from the admiral varied.  Some papers he read carefully, as indicated by his subsequent questions on the subject. Other papers, we learned, were simply tossed in the trash bin. I did not know if he distributed the papers outside of his office until one afternoon the admiral’s secretary called to tell me that he wanted me at his Crystal City office in 20 minutes.  I barely made it.  Five minutes later we were in a Navy car driving to the Pentagon.  The admiral handed me one of my white papers and said that I should be ready to talk about  it.  With whom, I asked?  Fifteen minutes later we were sitting in the office of the Chief of Naval Operations discussing  the paper.

In 1979, Admiral Meyer directed me to sit in as an observer at the sessions being held at the Naval Ordnance Laboratory in White, Oak, Maryland, where the basic parameters for the next major surface warship—the Arleigh Burke (DDG 51) class—were being developed.  That was a most educational experience about how the Navy works.

I retired from the Santa Fe Corporation in 1980, but continued to consult  to the Aegis project.  In March 1984, Admiral Meyer and I flew to Panama City, Florida, where he took me aboard the new Aegis cruiser Yorktown (CG 48) for her sea trials.  This was the second Aegis ship.  Led by the admiral, I walked and climbed throughout the 9,500-ton, 567-foot  warship.

The Aegis cruisers were built on the design of the anti-submarine destroyers of the Spruance (DD 963) class.  Doing so was a stroke of genius by Admiral Meyer.  Many Navy leaders, led by the Chief of Naval Operations, Admiral James Holloway, and the head of the nuclear-propulsion program, Admiral H.G. Rickover, had wanted Aegis/SPY-1 and their associated missile systems fitted in a nuclear-propelled ship, the so-called strike cruiser (designated CSGN).  Some preliminary designs  showed  a ship of more than 17,000 tons full-load displacement.  Instead, Admiral Meyer was able to “shoehorn” Aegis into a destroyer hull.  The resulting “cruisers”  were cheaper, and easier to build and to man.  They undoubtedly were the world’s most versatile and capable surface warships of  their time.

In developing Aegis, Admiral Meyer was more than a manager—he was a leader.  Poor performance—by his staff or contractors—was not accepted; superior performance was rewarded.  Also, he continually encouraged  improvements to the Aegis system.  His motto was “build-a-little, test-a-little, learn-a-lot.”  Thus, every few years there were improvements  to the system, nothing major, which would have caused  logistics, training, and other problems, but just steady changes to exploit  new technology and to respond to emerging threats.  This approach recently has enabled Aegis to be upgraded to counter ballistic missile threats, further demonstrating the versatility and flexibility of Meyer’s approach to Aegis.

Aegis was a major success in naval warship development.  Aegis ships are still being constructed by the U.S. Navy and the system has been adopted by several allied navies. And, Aegis missile systems are being installed ashore in Poland and Romania to provide ballistic missile defense for  European allies.

In September 1983, Admiral Meyer was reassigned as a deputy commander of the Naval Sea Systems Command, and two years later he retired from active duty.  That same year the American Society of Naval Engineers presented him with the prestigious Harold E. Saunders Award for lifetime contributions to naval engineering.

But Meyer  was far from retired. He opened a consulting practice in Crystal City and as I still was consulting  to several Navy activities  our paths crossed quite often.  At conferences we always found a few minutes to talk and sometimes he would call or send me a note after I published an article to tell me “what I got wrong.”   However, it always was done in a friendly and informative manner—and sometimes in an almost  joking way.

He received the particular honor of having a ship named for him in 2006—the Aegis destroyer DDG-108: The USS Wayne E. Meyer was the U.S. Navy’s 85th Aegis ship to be constructed.

We kept in contact until his untimely death in 2009 at age 83. From a farm family in Missouri that was ruined in the depression of the early 1930s, he rose to serve in the Navy, both at sea and ashore, and to direct  the development  of  one of the world’s most advanced weapon systems.  It was a privilege—and always challenging and at times almost fun—to have known and to have worked for him. 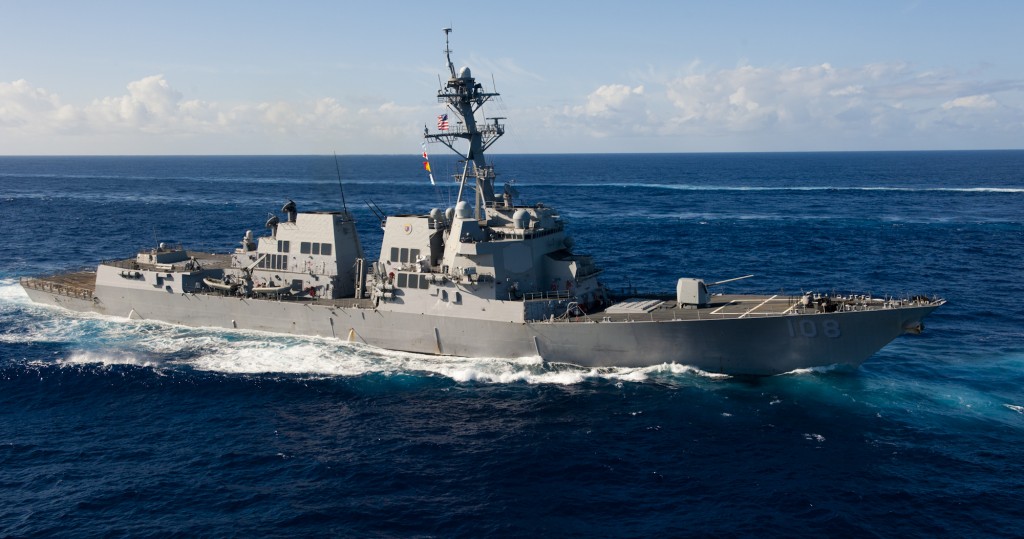