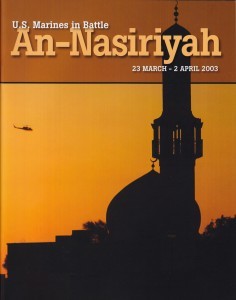 This booklet documents a notable battle in Marine Corps history.  Colonel Andrew is a professor of history at Clemson University who served as an artillery officer during Operation Desert Storm.  Andrew relied on official unit reports and interviews with the imbedded field historian and key individuals.

The details of the battle for An-Nasiriya are well presented with special emphasis on the specific units involved and the key battlefield leaders.  The fight for Nasiriya was conducted by Task Force Tarawa, one of four combat elements under II Marine Expeditionary Force (II MEF).  Their mission was to secure the town of Nasiriya to open an additional main supply route for the 1st Marine Division.  The roads in southern Iraq were fairly restricted.  Nasiriya was a major choke point between the US Army V Corps to the west (left) of II MEF.  The main highways converged there with two sets of bridges over each of the Euphrates River and Saddam Canal.

The original plan was to take the southeast bridge over the Euphrates and the northeast bridge over the Saddam Canal.  The problem was a stretch of road between them that cut through the edge of town, referred to as “ambush alley.”  Shortly after their initial assault, the Marines ran into a damaged Humvee with some soldiers from the 507th Maintenance Company that inadvertently ran into the city the night before.  The movement to take the NE bridge over the Saddam Canal became a classic fog of war scenario with bad radio communications.  There was confusion where the other units were located.  This directly led to an authorized airstrike by National Guard A-10s on friendly troops, killing at least 8 Marines and destroying several amtracks.

The account of the battle reveals bravery and outstanding leadership at various levels of command through difficult and confusing circumstances.  There is an excellent review of the friendly fire incident, noting a number of lessons learned on conducting Close Air Support.  Of note is how well Task Force Tarawa worked with other joint forces such as Army and Navy Special Operations forces.  These units shared valuable intelligence and worked closely together on the mission to save Army PFC Lynch who was held at a hospital in the city. This cooperation, along with the determined effort of Marines to save other soldiers of the 507th, was a testament to how joint forces learned to treat each other as brothers in combat.  Another takeaway is how well US forces learned to use combined arms, including artillery and air support, and both rotary and fixed wing aircraft to overwhelm a determined enemy.

This battlefield account is well presented and in an easily readable format.  The maps and pictures are very helpful.  There are numerous footnotes and references as should be expected from a publication of this nature.  The only minor gripe I had was an overly flattering description of several of the commanders in the first part of the account.  Perhaps they deserved it.  Regardless, this battle was a difficult one led by very professional and capable commanders and worthy of being officially documented.

Col. Marsh is a retired Marine Corps officer and naval aviator who flew the A-4M Skyhawk.