The Naval War of 1812 “America’s Second War of Independence:” Collections of William I. Koch and the U.S. Naval Academy Museum

In Their Own Words: The Navy Fights the War of 1812

Enthusiasts of the War of 1812 will benefit from two brilliantly laid out and finely compiled volumes for 2013. Both books transport the reader back to the days of the fighting sail with thrilling reprints of art and documents of the period.

Drs. William S. Dudley and J. Scott Harmon’s The Naval War of 1812 is a “Cadillac” on the “showroom floor” of War of 1812 writings. The print quality is truly superb.  One must open the book to hear the static cling seal give way to the incredible prints of 1812 battles, artifacts, and portraits. The battle scenes are accompanied by remarkable line drawings by Helen Riegle, who masterfully shows ship locations, headings, and land topography.

There are terrific insights into the lives of the brilliant characters of these extraordinary battles. One such story is of Thomas Macdonough.  His days as a lieutenant taking “command of a minuscule force of two row galleys, formed to discourage smuggling with Canada. Macdonough showed himself to be a man of great activity, immediately purchased one sloop and rented two others…” His story, like many others, celebrates the resourcefulness (and daring) of our officer corps which the service carries to this day.

The book offers new insight into all maritime operations rather than focusing only on the battles. The well-written section on the 1813 British Blockade gave some background into the politics and personalities of blockade and the U.S. counter effort. The pages come alive with the portraits of the ruddy-cheeked Captain James Lawrence and the great majesty of British Captain Sir Philip Bowes Vere Broke. The two portraits capsulate the adversaries themselves; Lawrence representing the U.S. as the sanguine upstart group of colonies seeking true nation approval, and Bowes Vere Broke as the proud, dominant parent nation.

Mention of the merchant marine was especially poignant; the figurehead of the American privateer General John Armstrong shows a bearded, armor-chested, U.S. flag-bearing man from the Naval Academy’s own collection. The caption of “unknown artist” tells the story of the numerous sailors and merchant men who, like the artist, went unknown but can be remembered and celebrated by similar volumes. 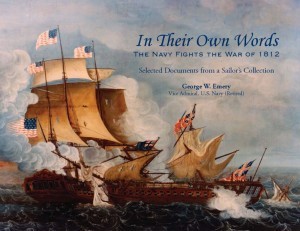 Vice Admiral Emery’s In Their Own Words gives the reader plenty of opportunities to find something to cherish.  This volume is a collection of personal favorites from Emery’s collection of documents of the early U.S. Navy.  The carefully chosen documents capture the fighting spirit of the fledgling Navy.

The collection opens with a letter from Stephen Decatur, well known for his daring raid on the frigate Philadelphia at Tripoli.  Decatur tells a subordinate that the Navy’s reputation is in their hands. The mere words draw the reader on to turn the page and find Isaac Hull’s own hand expressing his challenge in getting Constitution to sea. The two documents contrast each other brilliantly; the first showing the excitement of building the Navy from the keel up, and the second with the harsh reality of doing so.

What is remarkable about these and so many other documents is their relevance to the Navy’s story. The accompaniment of many of the documents with full-color oil – painting reprints from the Naval History and Heritage Command photo archives made the documents come alive.  The lithograph by Nathaniel Currier of Privateer General Armstrong was a favorite.  I felt like I was watching the Battle of Fayal up close.

In Their Own Words assumes the reader has a basic understanding of the timeline and importance of the various actions in the war.  In that regard, it is not a great book for a layperson.  Those with a moderate or higher level of understanding of the conflict will certainly find much to love.

Both volumes are great opportunities to get underway with the Navy of 1812 and are worth the investment for serious readers of the period.

In Their Own Words can be ordered online from the US Navy Museum Store at this link.