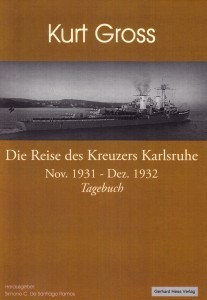 The diary of Kurt Gross, a petty officer of the German navy (Reichsmarine), covers the journey of the cruiser Karlsruhe to North and South America between November 1931 and December 1932. It is a unique document, as it provides detailed insight into the overseas operations of the German navy during the interwar period, a topic often overlooked by naval and maritime historians.

The light cruiser Karlsruhe, commissioned in 1929, was the second ship of the so-called Königsberg-class, and mainly used as a training ship for naval officers up to 1936. Later on, the Karlsruhe participated in the non-intervention patrols during the Spanish Civil War before she sank in April 1940 during World War II. During her five training cruises in the early 1930s, Karlsruhe visited ports around the globe, including a great number of visits to American ports.

Given the fact that the 1931/1932 journey of Karlsruhe brought the ship and its crew into direct contact with the U.S. Navy and thus the enemy to come, the reader would hope for comments about the differences between the two navies and the politics behind the training cruise at large. Unfortunately, every reader who is interested in anything beyond the daily routine of a petty officer and a touristy perception of the ports visited will be severely disappointed. It seems that Kurt Gross was at least somewhat apolitical.  His main interest focused on exotic foreign ports and soccer matches between the crew of the Karlsruhe and various teams encountered during the cruise. Gross was a member of the cruiser’s soccer team. Given his sometimes plain or simple style of writing and the repetitive description of drinking events, dinner invitations by local dignities and/or expatriate Germans in the ports visited, it needs to be assumed that he was an average sailor without any advanced interest in the larger political stage. While this might irrelevant for historians, it is the strongest point of the whole book, as it provides a clear insight into what really mattered to most or at least many of the non-commissioned crewmembers of the Reichsmarine.

The entire book is published in German, the original language of Gross’ diary.  It needs to be assumed that the readership outside Germany will remain limited. More important, non-native German speakers will probably be unable to catch the subtle meanings of some of the phrases used by Gross. An extended commentary to the diary would have be helpful. The book’s German publisher, Hess Verlag, is by no means a specialized press for naval or maritime history.  It is a press with a wide variety of topics in its portfolio and presumably a comparable low level of manuscript selectivity.  This most likely accounts for why the book does not include such an elaborated commentary and the few introductory and closing remarks.  The footnotes provided by the editor, Simone C. De Santiago Ramos, are by no means satisfactory as they provide some explanations on names mentioned in the diary.  He does not place the diary in a larger analytical framework. When, for example, De Santiago Ramos compares the journey of the Karlsruhe with the journey of the U.S. Great White Fleet (1907-1909), she falls short of providing any evidence that the training cruises of Karlsruhe were really based on a comparable political concept to the Great White Fleet. She does not discuss if they might have been part of a fleet build-up at the end of the Weimar-Republic, like the example of the secret submarine construction by Ingenieuskaantor voor Scheepsbouw (IvS) in the Netherlands.  Maybe if they were just regular overseas training cruises of a German navy returning to ‘normal’ more than a decade after the Treaty of Versailles.  Some of the few explanatory footnotes lack academic writing style and it seems that the editor isn’t really familiar with concepts of critical editions of autobiographic material like Gross’ diary not to mention that some of the footnotes read for a German academic a little bit like been written by foreign language speaker or an expatriate German with little contact to academic writing in German.

Thus, the final recommendation on the book remains mixed. On the one hand, the publisher and the editor need to be lauded for unearthing the diary of an average petty officer that provides detailed information on the every-day life onboard the light cruiser Karlsruhe during an international training cruise of the interwar period and thus during a period that is normally overlooked by most naval historians dealing with the German navy due to the developments to follow after 1933. On the other hand, publishing such a diary without extensive critical comment or even better a complete critical edition of the respective autobiographic material, makes the book for most readers and in particular non native-German speakers with limited detail knowledge about the complex history of the Reichmarine in the interwar period up to a certain degree nothing more than an interesting travel book written by an average German sailor.  Gross’ diary itself is fascinating, but without a scholarly analysis of the nuances of the language, like for example an answer to the question if the sometimes racist language is typical for the time at large or for the German navy in particular, or an analysis of the self-conception of German sailors and the German navy whenever encountering their British or U.S. counterparts, the book remains somewhat unsatisfactory and it needs to be doubted if non native German speaking naval and maritime historians will be able to close the gap based on their own knowledge and analytical skills.

It should be hoped that a potential future translation of the book into English would not remain just a translation, but a real critical edition. Right now the book is basically only a publication of a primary source; the analysis still needs to come. If such an analysis might ever come it will be an important contribution to the understanding of naval activities and self-conceptions of average sailors of the future main belligerents at the eve of World War II.

Dr. Heidbrink is a professor at Old Dominion University