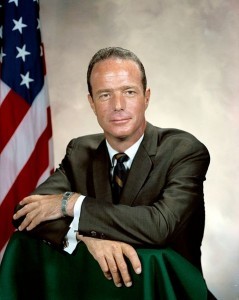 (Editor’s note: This is the nineteenth in a series of blogs by Norman Polmar—author, analyst, and consultant specializing in the naval, aviation, and intelligence fields. Follow the full series here.)

I knew an astronaut.  We were friends for a few years.  We were not close, but we were on a first-name basis.

Commander M. Scott Carpenter was the second American to orbit the earth and the fourth American in space.  Scott was a naval aviator.  He was in a Navy training program at the end of World War II and, after college, in 1949 entered flight training; he earned his wings in early 1951.  He flew P2V Neptune patrol planes, including surveillance missions along the coasts of the Soviet Union and China.  Subsequently he attended test pilot school and served as a Navy test pilot.

He was one of seven military pilots selected for Project Mercury in 1959, the American effort to put a man in space.  After serving as backup pilot for John Glenn, the first American to orbit the earth, Scott flew the capsule Aurora 7, which orbited the earth for 4 hours, 56 minutes in May 1962.  Fuel exhaustion forced him to take manual control of the craft, the first time that had occurred in the U.S. space program.

Scott never again flew in space; a motorbike accident caused his grounding.  In the fall of 1963 he entered the Navy’s SEALAB program—he was going into “inner space” with the Navy’s Deep Submergence Systems Project (DSSP—established in 1964). In 1965, in SEALAB II off the coast of California, Scott spent a record 30 consecutive days living on the ocean floor at a depth of 205 feet.  He then briefly returned to NASA for a ground position.

When we met I was employed by the Northrop Corporation and assigned full time to DSSP—developing advanced submarine escape and rescue, deep-ocean search and recovery, submarine salvage, and seafloor habitation systems.  The project also had “management” responsibilities for Admiral H.G. Rickover’s NR-1 nuclear research submersible.

Scott reported to DSSP in 1967 to serve as senior “aquanaut” in the SEALAB underwater habitation program.  The objective was to enable Navy divers to work and live at depths to 1,000 feet while undertaking salvage and other activities.

After Scott arrived at DSSP headquarters in Bethesda, Maryland, I saw him on a regular basis at meetings and at the coffee bar (tea for me).  I worked with him on SEALAB-related studies and documentation, and he helped me considerably in writing the press handbook for the SEALAB III project.

SEALAB III was to place five teams of eight aquanauts on the ocean floor at a depth of 600 feet off the California coast to work and “live” under an artificial atmosphere for consecutive 12-day periods. Scott would undertake two of the 12-day sessions on the ocean floor.  The aquanauts were U.S., British, and Canadian Navy divers, and several civilian physicians, scientists, and engineers—and one astronaut.  After each 12-day period under pressure at 600 feet the aquanauts would undergo seven days of decompression in the surface support ship.  (The decompression period would be the same regardless of how long the aquanauts were on the bottom at that depth.)

Several problems were encountered as the Navy lowered the SEALAB habitat to the ocean floor in February 1969.  Disaster struck when one of the U.S. Navy aquanauts, attempting to repair those problems, died because of problems with his breathing apparatus.  The SEALAB III project was halted and then cancelled.

Periodically some of my colleagues at Northrop would ask if I could obtain a signed photo of Scott for them.  He readily provided them.  One day when I asked Scott for a photo he reached into a desk drawer, pulled out a photo, and, with pen poised, he asked, “Who is this one for?”

Being the wise-guy that I am, I replied, “Mrs. Polmar.”  Now Scott was getting angry.

“Ida Polmar,” I quickly said.  Scott scribbled on the photo, shielding the inscription with his other hand.  He pulled a large brown envelope from his desk, slid the photo into it, and carefully sealed the envelope.

When he handed the envelope to me I ripped it open and pulled out the photo.  I probably blushed red with embarrassment. Scott had written: “To Ida Polmar.  Best wishes from one of her son’s many admirers.  Scott Carpenter.”

The autographed photo now hangs in our home.

He rarely spoke about the astronaut program, but preferred to concentrate our conversations on seafloor living and ocean engineering.  But in one conversation he observed that at one point  NASA considered selecting seven naval aviators—Navy and Marine Corps—for the Mercury program.  However, in part for political reasons, the final selection was three Navy, one Marine, and three Air Force pilots.

Scott retired from the Navy in 1969.  After that, we saw each other, on rare occasions, at conferences and symposiums as he continued in the ocean sciences field.  He founded Sea Sciences, Inc., a corporation for developing methods to use ocean resources and improve environmental health.

Scott was highly intelligent and always willing to try something new; on a personal basis he was friendly and thoughtful.  It was a privilege to know and, albeit to a limited degree, work with one of the first astronauts.  He had made contributions to America’s exploration of space and of the ocean depths.  He died in October 2013. 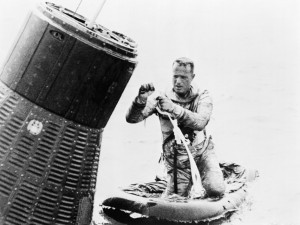