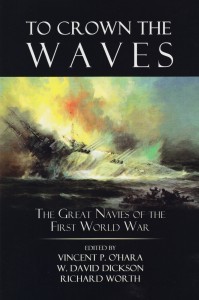 The approaching centenary of the First World War continues to generate many new works of scholarship.  Most volumes will be devoted to land campaigns, whose images of trench warfare and the slaughter of millions traditionally have captured the primary attention of researchers and readers.  The editors of To Crown the Waves remind us “the First World War was also fought at sea, and there, in the failed naval blockade of the United Kingdom and the successful blockade of the Central Powers, the war was eventually won.”

The literature of First World War naval warfare focuses to a great extent on the Royal Navy and the German Imperial High Seas Fleet.  Such literature emphasizes prewar planning and the archetypal naval battles that occurred during the war, such as Helgoland Bight, Coronel, the Falklands, and Jutland.  To Crown the Waves breaks free of this typical focus and follows the previous volume, On Seas Contested: The Great Navies of the Second World War.  This time, the editors provide a comparative study of the seven major navies of the Allied and Central Powers of the First World War: Austria-Hungary, France, Germany, Great Britain, Italy, Russia, and the United States.  A naval historian authors each of the seven chapters.  Every chapter follows an identical outline, providing a consistent comparative framework.  The sections and subsections considered with regard to these major navies are:

The book contains maps showing the primary and secondary naval bases of each of the seven navies.  Over forty useful tables are included.  Many tables provide facts that are not otherwise available.  These tables draw technical comparisons between the major naval powers in areas such as size, weight of shell, range, and ship type.  Other tables indicate the ships available, lost, and replaced during the war and the types of torpedoes used and ships sunk by submarines.

The period before and during the First World War brought about great technological change in naval weaponry and strategy.  By enforcing a common outline, To Crown the Waves reveals how each major navy expected its next war to be fought, what its actual experiences were once war came, and how it endeavored to adopt and adapt to new technologies and practices based on the hard realities of actual combat.  As the editors conclude, “the lesson of World War I is that peacetime evolution is followed by wartime revolution.”

Although consideration of each major navy follows a common outline, the quantity and quality of information varies.  For example, French naval aviation receives a single paragraph of consideration, while their German and British counterparts are each reviewed in multiple pages.  Various chapters contain almost no source notes (chapters on Germany, Great Britain, and Italy contain none).  Only a brief bibliography is included, and the scope of each varies greatly for each country.  It would be useful to provide more comprehensive bibliographies, especially with regard to those navies that typically receive little consideration in literature.

Overall, To Crown the Waves is a useful introduction to the major navies of the First World War and a valuable contribution to naval history.  Common chapter ensures that each topic is addressed for each navy.  While the extent of consideration in each subject varies, the volume is nonetheless informative, especially for readers with little or no background on First World War navies.  Experienced naval historians may find facts he or she previously was previously unfamiliar with.

Alan M. Anderson is a Ph.D. candidate in the Department of War Studies at King’s College London and the recipient of the 2013-2014 Rear Admiral John D. Hayes Pre-doctoral Fellowship from the Naval History and Heritage Command.