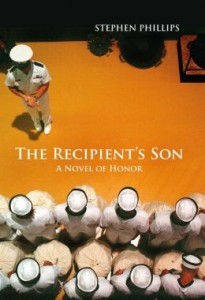 Developing future naval officers morally, mentally, and physically is not an easy task.  Midshipmen come from all fifty states with various backgrounds, beliefs, and personalities.  By the time they take their oath, they must be ready to lead.  Stephen Phillips, a 1990s Naval Academy graduate and former Explosive Ordnance Disposal Officer, shed some insight on how the United States Naval Academy prepares leaders for service in the Navy and Marine Corps.  In The Recipient’s Son: A Novel of Honor, Phillips uses fictional Midshipman Donald Durago to show the high and low points of midshipmen life, including plebe summer, “come arounds,” Army-Navy football, and graduation.  The book is filled with valuable memories and descriptions cherished by graduates while providing an accurate yet realistic look into midshipmen life for faculty, staff, or those interested in the academy.

First Class Midshipman Durago survives major life challenges on the yard and selects orders to his first ship.  Most seniors focus on creating lasting memories by making plans for graduation, neglecting schoolwork, and purchasing new uniforms needed as commissioned officers.  All of that changes when Durago is charged with a major conduct offense for harassing a female midshipman, Whorton, during her “Plebe Summer” indoctrination training.  Due to her poor performance and conduct, she finds herself standing before a board to determine if she should be separated from the academy.  A child born of privilege, Whorton’s parents call their Congressmen prompting an investigation on harassment by the upper-class midshipmen spearheaded by an overzealous and cynical Battalion Officer named Commander Gordon.  His agenda is bent on reforming the Brigade to enhance his career.  The acquisitions made against Durago force him to look at his progression at the academy.

The author masterfully ties the struggles encountered by Midshipman Durago with what he describes as the “environment” of the academy.  Phillip’s first novel, Proximity: A Novel of the Navy’s Elite Bomb Squad, received praise for the insight offered about the Navy’s Explosive Ordnance Disposal teams where he served as a technician.  The Recipient’s Son begins in 1988, the same time Phillips entered the academy.  At this time, the United States is still engaged in the Cold War.  During the main character’s time, the Persian Gulf War comes and goes.  By his senior year, the Navy begins to transition from wartime status to peacetime.  With it, Durago observes the people in charge of an environment that leans “everything towards academics rather than military performance,” citing preference toward academic performance rather than tactical or military knowledge and skill.  Later, the Naval Academy is haunted by a memorable cheating scandal over an engineering test further illustrating the struggle of midshipmen to accept the Naval Academy’s new mission of peacetime academic excellence.  Academics are not the only area receiving a new level of importance.  Durago recalls an acquisition made to a football player, stating, “You don’t go to the Naval Academy, you go to the Naval Academy Athletic Association.”

Similar challenges arise within the Brigade.  The brigade would assemble at the beginning of each year to hear the Superintendent talk about how midshipmen serve a “Nation at War.”  Seniors were authorized to wear khaki’s to emphasize the importance of their position as leaders in the Brigade to ensure they were ready to lead after graduation.  Cynicism surfaces despite the talk of importance of duty and responsibility.  People with multiple honor and conduct offenses (including an exception to the zero-tolerance drug policy) are allowed to remain within the Brigade.  In some cases, they are allowed to graduate due to superior grades in the classroom or athletic performance.  Standards are lowered in some areas, and traditions such as the Herndon Climb became in jeopardy of being removed.

In the end, senior leadership set the overall climate of the Brigade.  However, the author’s story illustrates how everyone in Durango’s chain of command can make an impact on a future leader.  Durago’s mentors challenged him and made him a better person.  Throughout the story, Phillips places an emphasis on character.  The author breezes by some of the academic problems faced by Durago and the physical challenges of diver screening by spending more time on the evolution of his character in fitting with institutional goals.

The author’s brilliance in capturing the themes of the academy can only be met by his ability to captivate readers of all backgrounds.  At face value, the book offers a story of a college student struggling with the challenges of adult life.  Alumni will find harmony in his description of various activities throughout the yard, including controversial areas such as the attitude towards WUBA’s, IHTFP, and the “Black-N society.”  Plebes like Durago look for help to reach their full potential.  All it takes is another midshipman, a roommate, a professor, or officer stationed on the yard to inspire a future naval leader.  Readers looking for a captivating story or a realistic look about the growth of a young midshipman will find satisfaction in Phillip’s work.

LTJG Shaffer is the Fire Control Officer onboard USS Cape St. George (CG 71).  He previously served as the Brigade Honor Chair at the United States Naval Academy from the 2009 to 2010 academic year and onboard USS Curtis Wilbur (DDG 54) as First Lieutenant.