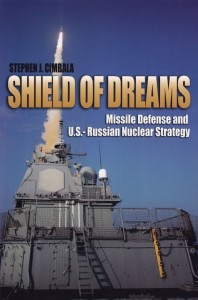 According to author Stephen Cimbala, Shield of Dreams is “a policy study that provides a focused discussion of missile defenses and their relationship to Russian-U.S. nuclear arms control and nuclear deterrence relationships and nuclear proliferation [. . .] especially in Asia.”  In this book, Cimbala identifies and reviews nuclear war strategies associated with historical intervals such as the “First Nuclear Age” and the “Cold War.”  The nuclear age came about at the close of World War II as a direct result of the bombing of Hiroshima and Nagasaki with nuclear weapons.  The Cold War soon after developed, as the Soviet Union actively challenged the U.S., primarily through its proxies in North Korea (1949-54) and North Viet Nam (1955-1975).  With respect to the threat of nuclear war, the 1962 Cuban Missile Crisis was of particular importance.  Fortunately, President Kennedy and Soviet Premier Nikita Khruschev agreed on a trade-off.  Khrushchev withdrew nuclear missles installed in Cuba in exchange for the U.S. withdrawl its own missiles in Turkey and Italy.

During the “Second Nuclear Age,” Reagan and Gorbachev agreed on significant mutual reductions in the numbers of nuclear arms in both countries.  Under the political conditions present at the time this book went to press, Cimbala did not foresee further significant reduction of U.S. and Russian nuclear arms because of the growing number countries that have acquired such weapons (e.g., Pakistan, India, China, Israel, North Korea, and Iran).  Since then, this prediction proved correct.  Even Japan is presently rethinking its “no nukes” policy.

Indeed, North Korea continues to be a growing concern to the US, South Korea, and Japan, as they continue to develop, test, and improve missiles capable of delivering nuclear strikes.  Considering North Korea’s frequent diplomatic saber-rattling, it is difficult to discern if the true intentions of its government are more than only blackmailing its enemies for gifts of food and fuel to sustain its otherwise moribund economy.  North Korea’s truculence may seem overdone, considering the small size and questionable reliability of its nuclear arsenal.  Yet they have gotten the close attention of its neighbors by publicizing their advances in nuclear weapons.

One unique feature of this book is its data.  Over a dozen spreadsheets showing calculations of probabilities (under various specified conditions) of the relative success of nuclear attacks by two parties (usually the U.S. and Russia) against one another.  These spreadsheets demonstrate the minimum size and type of nuclear weapon arsenals needed to achieve a “standoff” between counties like the US and Russia in the event of a treaty negotiation.

Cimbala is clearly knowledgeable in this field.  He discusses the individual topics in a clear language so that readers can easily understand the history and significance of the development of nuclear weapons in the context of U.S.-Soviet/Russian relations.  Nevertheless, nuclear strategy is a relatively esoteric topic that continues to undergo significant change as the number of states with nuclear capability grows.  Senior and flag rank officers should find this book particularly worthwhile reading.