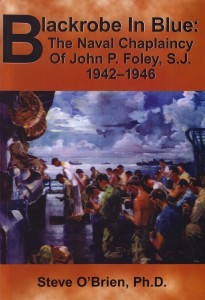 It was only four years in the long life of Father John P. Foley, S.J.  For many of “the greatest generation,” it was the most momentous time of his life. After the arduous years of becoming a Jesuit and serving as an academic administrator, Father Foley felt called to become a Navy Chaplain. His deepest desire was to serve God by ministering to men in harm’s way aboard a ship at sea. He got his wish and served valiantly as Chaplain aboard USS Clymer (APA 27) then on USS Vella Gulf (CVE 111) with a brief interlude in between as a Chaplain at Bethesda Naval Hospital. When the war ended, he had opportunity to see the devastation of Japan before leaving the navy and returning to his responsibilities at Boston College.

His thrilling story is superbly told by Steve O’Brien in Blackrobes in Blue. The author spent countless hours in conversation with Father Foley and even more time painstakingly researching and digesting his 500-page diary. This itself would make for a compelling read. But, the author did an even more remarkable job providing accurate historical and naval context to Father Foley’s life and service as a Navy Chaplain.

O’Brien’s splendid book is based on solid research appropriate for a Ph.D. dissertation. He painstakingly supported his views with extensive documentation. O’Brien’s informative notes often elucidate the topic in ways that add new and interesting information or insights which would have interrupted the smooth flow of the story if they had been included in the body of the book.

This book gives an intriguing picture of the origin and development of military chaplaincy focusing on naval chaplaincy in general and the role of Jesuits. With Father John P. Foley, S.J. as his focal point, the author recounts the beginnings of the Navy Chaplain School in Norfolk and its move to Williamsburg, VA. References to Father Foley’s classmates and others associated with the school are interspersed throughout the book.

The historical soundness of the book is astoundingly matched by his presentation of the Navy with equal clarity and congruity.  One might expect to learn about O’Brien’s experiences as a retired Navy Chaplain.  This is not the case.  The extensive hours of research into his diary and the careful reading of Navy resources add to the author’s own conversations with Chaplain Foley.  The face-to-face dialogue and diary alone would be sufficient to grasp a great deal of context. However, the author undertook the strenuous work of historical research and study of Navy life. This enabled him to make Chaplain Foley “come alive” for the reader in a trustworthy telling of his ministry.

O’Brien notes how the Secretary of the Navy promulgated a message explicitly prohibiting the keeping of diaries by officers or enlisted personnel, especially in combat areas. Though Father Foley violated this directive, we can be thankful that he did without consequence. Without his diary, we would not know the richness of the natural world around him and the people he interacted with. We would not know of his relationships with other chaplains and with the men with whom he served. We would not see his integrity in the face of decisions his commanding officers made which he believed contravened God’s moral commands. We would not know of his generosity to missionaries, orphans, and others at the mercy of depravation and the cruelties of war.  Without the author’s sensitivity and perseverance in asking Father Foley the right questions, this book would not have become the engrossing story that it is.

Anyone fascinated by stories of the heroic exploits by those courageous men and women of World War II will find this a compelling book.  Readers will come away feeling they really know this priest and can’t help but admire him.  I wish there was room for my own admiration.  The book will enable some readers to recall familiar scenes from the war in the Pacific, while younger audiences will recognize such information from previous reading. Readers will be amazed at the level of knowledge provided by O’Brien when discussing the sacrifice from these indescribable events.  This book deserves a wide readership and should be reissued by a major publisher to a wider audience.

Steve O’Brien did an exceptionally fine job presenting the Navy Chaplaincy in World War II in a favorable light, particularly Roman Catholic Chaplains. The author maintained his integrity in writing it and acknowledged specific points of view some of his readers will take exception to. I corresponded with him and was delighted with his open and honest responses. I hope he will undertake further writing.  I even suggested he take it up as a major project similar to the treatment of now deceased Vice Admiral Arthur K. Cebrowski, a quintessential naval officer and devout Roman Catholic I had the privilege to serve with on USS Midway (CV 41), 1990-91. That suggestion should tell you how pleased I am with the author’s stimulating treatment of Father John P. Foley, S.J.

Commander Murphey retired from the Navy as Command Chaplain, USS Midway (CV41). Prior to active duty he was Professor of Religion and Director of Interdisciplinary Humanities Program, Transylvania University, Lexington, Kentucky.