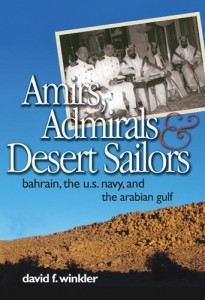 “This book should be required reading for all who sail ‘east of Suez.’”

The Naval Institute Press is pleased to announce Dr. David Winkler’s 2007 study of the U.S. Navy in Bahrain will be available in eBook format beginning on November 15, 2013.  PRE-ORDER NOW!

Host to the U.S. Navy for nearly six decades, Bahrain has been a steadfast American ally in the turbulent Middle East. Its unique relationship with the United States evolved through a series of friendships between Bahrain’s ruling Al Khalifa royal family and top U.S. Navy flag officers assigned to the fleet in the Gulf. Over the years it has become a strategic partnership critical to global security.

As naval historian David F. Winkler examines these developing relationships, he offers a fascinating overview of Bahraini history, the entry of American humanitarian and economic interests, the establishment of an American naval presence in the Cold War, the Arab-Israeli conflicts, and the downfall of the Iranian shah, among other subjects. The author tells the story from both Bahraini and American perspectives.

Given U.S. commitment to the region and its concurrent objectives of combating the global war on terrorism and establishing democracy, this book provides an important historical context for those interested in a crucial facet of American foreign relations. While many works describe the history of U.S. diplomatic and military involvement in the Gulf, this is the first to cover in depth the history of the U.S. Navy in Bahrain.

For those of you who would like to Pre-order this fantastic book, please go to the Naval Institute Press HERE or click the Amazon image below:

David F. Winkler is the program director for the Naval Historical Foundation in Washington, D.C. He also supervises the foundation’s Naval Heritage Speakers Program and other projects to support the Naval History and Heritage Command and the National Museum of the United States Navy. In addition, he writes a monthly history column for the Navy League’s journal Seapower. His previous book, Cold War at Sea: High Seas Confrontation between the U.S. and Soviet Union, was published by the Naval Institute Press in 2000. He served as managing editor of The Navy, an illustrated book recently published by the Naval Historical Foundation.