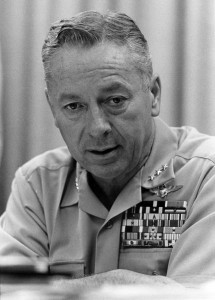 (Editor’s note: This is the sixteenth in a series of blogs by Norman Polmar, author, analyst, and consultant specializing in the naval, aviation, and intelligence fields. Follow the full series here.)

In high school I began writing my first book—a history of the world’s aircraft carriers. In 1964, I wrote to the U. S. Naval Institute asking if they would be interested in considering the book for publication. The response was that they had a contract with then-Captain Malcolm W. (Chris) Cagle for a book on U.S. aircraft carriers. That book was to be a popular history, similar to Theodore Roscoe’s books Destroyer and Submarine, both published by the Naval Institute. The staff suggested that I should contact Cagle about a possible collaboration.

A graduate of the Naval Academy class of 1941, Cagle served at sea in a destroyer from 1941 to 1943, when he underwent flight training. After duty as an assistant flight instructor, in 1944 he reported to Fighter Squadron (VF) 88 as executive officer. Flying the F6F Hellcat, he was awarded the Navy Cross and the Distinguished Flying Cross for action against the Japanese.

Immediately after the war he became commanding officer of VF-88 and went on to a distinguished career in naval aviation, including command of the Franklin D. Roosevelt (CVA 42) in the Mediterranean in 1964-1965. He also wrote several books, including the definitive Sea War in Korea with Frank Manson (1957), as well as a score of articles in the Naval Institute Proceedings. These included the highly significant “Sea Power and Limited War” (July 1958) and the comprehensive “Task Force 77 in Action Off Vietnam” (May 1972; Cagle participated in the Vietnam War as a carrier division and then task force commander). He also had a key role in establishing the aviation magazines Foundation and Wings of Gold.

His response to my letter about collaborating on a carrier book—while he was commanding the Roosevelt—asked me about my background and qualifications. I wrote back that I had neither the background nor qualifications to write such a book—just  interest and enthusiasm. His reply was cordial, but terse: he suggested that I should write my book and he would write his. In the end, Cagle never completed his carrier project. My book—Aircraft Carriers: A History of Carrier Aviation and Its Influence on World Events—was published in 1969 (and in a revised, two-volume edition in 2006 and 2008).

I next encountered Cagle—in person—in 1970 when the Navy “borrowed” me from the Northrop Corporation to help write justifications for nuclear-propelled aircraft carriers. At the time Cagle was Assistant Deputy Chief of Naval Operations (Air). Working with the staff, I had many exchanges with Cagle and we became friends.

In July 1971 the Chief of Naval Operations, Admiral Elmo Zumwalt, appointed Cagle as the Navy’s first Chief of Naval Education and Training with headquarters in Pensacola, Florida. He was directed to coordinate and advance all Navy training activities as well as some of the Navy’s senior educational institutions. Periodically, Cagle would ask me to come down to Pensacola to brief various groups on my views of the Soviet Navy, a presentation derived from my earlier studies of Soviet naval developments and exercises (see blog “Analyzing Okean”).

Subsequently, Admiral Zumwalt asked Cagle to form a team to travel around the country to give background briefings to special groups on the need for maintaining a strong U.S. Navy. This occurred as the Navy was “downsizing” after the Viet Nam War and the Soviet Navy was rapidly increasing its capabilities. I was asked by Cagle to participate.  The briefing team consisted of  Vice Admiral Cagle; Vice Admiral Jerry Miller, then-deputy director of the Joint Strategic Target Planning Staff, responsible for targeting all U.S. strategic nuclear weapons and a former commander of the Second and Sixth Fleets;  and  retired Rear Admiral George Miller, the Navy’s leading strategist, at the time on loan to the Maritime Administration; and me. (I had met and worked for Admiral George Miller in 1970-1971, when he was Director, Navy Strategic Systems.)

During the next couple of years our team traveled far and wide, briefing newspaper editors and publishers, chambers of commerce, and Naval Reserve units as well as members of Congress and their staffs. We held sessions in Los Angeles, New Orleans, New York, Atlanta, Roanoke, and several other locations. The four of us became close friends.

On one flight in 1973 Cagle asked me about the studies firm for which I worked, Lulejan and Associates. I gave him a brief rundown. He then asked if I thought we could help him with a training problem: The United States was selling the Shah of Iran six guided missile destroyers, three diesel-electric submarines, 50 F-14 Tomcat fighters with Phoenix missiles, and other military equipment. The Shah was building up his armed forces and the training of Iranian personnel was years behind schedule for operating the ships, submarines, aircraft, and weapons being procured. Cagle said that the office of the CNO (OpNav) kept delaying commitments to train Iranian naval personnel, with several offices and agencies having responsibility for the training. Thus he was going to take charge.

In response to his interest, my boss, Dr. Dominic Paolucci, a retired Navy captain and submariner, and I flew down to Pensacola to brief Cagle’s staff on our capabilities. Other firms made similar presentations.

Cagle, following comprehensive discussions with the head of the Iranian Navy, on 17 July 1974, proposed three options for the training effort: (1) all in-country training by the Iranian Navy, (2) all training in the United States, and (3) all contractor training. He urged a combination of these approaches. He wrote, “These are your urgent problems now,” as he addressed the litany of training issues facing the Iranian Navy and proposed a “management company” be engaged in the United States to develop the overall plan. Further, Cagle urged that a firm be engaged “sole source, otherwise many months will be wasted in selection, months we cannot afford to lose,” and he proposed Lulejian & Associates for that role.

Cagle’s proposals were communicated to U.S. officials—in Iran and Washington—as well as to the Iranian Navy. Eventually the Navy decided to do the management planning “in house,” which would have been a total disaster except that the Iranian destroyers were far behind schedule.

Meanwhile, Norair Lulejian, a retired Air Force colonel and senior analyst in the Army and Air Force, had proposed that Cagle come to work for our firm when he retired, which was announced for late 1974. Cagle declined, saying that he had not yet considered his “second career.” Significantly, the job offer as well as stock options had come from Lulejian, the Chief Executive Officer and Chairman of the Board of the firm, not from Paolucci, the president. He had no knowledge of the offer. Indeed, disagreements over staff pay raises and other issues led Paolucci to leave Lulejian early in 1975.

Meanwhile, the Iranian naval training program went forward—albeit far behind schedule to man the new platforms. And the squabbling between the various Navy offices and other agencies responsible for the transfer of weapons and training continued.

Paolucci became president of the newly established Santa Fe Corporation and I soon joined him in that firm. Cagle retired from the Navy, did some consulting to Lulejian as well as to other firms, and managed his cattle farm near Winchester, Virginia. My wife, kids, and I visited him on the farm during our periodic tours of Civil War battlefields and other sites.

Then, in 1977, Cagle and Paolucci, and a captain who had worked for Cagle and joined the Lulejian staff after his retirement, were indicted by a federal grand jury. Cagle was charged with conspiracy to violate federal bribery laws, conspiracy to defraud the United States, concealment, and conflict of interest. Paolucci was charged with conspiracy. The government’s case had been initiated by Rear Admiral Harry E. Gerhard, who claimed that Cagle had acted improperly and kept information from him. Cagle outranked Gerhard and was not in his chain of command.

I was subpoenaed to appear before the grand jury. The U.S. attorney’s interrogation of me on 15 November 1977, was both superficial and inaccurate: He had no knowledge of the Navy, of the training issues, of how contractors work, and—especially—of  the relationships between Paolucci, Cagle, and me.

Further, the U.S attorney’s “facts” as presented to the grand jury and at the trial were inundated with errors: For example, a significant meeting in Falls Church, Virginia, on 8 July 1974, including Paolucci, was testified to by witnesses. But on that date Paolucci was in Stuttgart, Germany! Similarly, a letter that a witness claimed he never saw had a cover note in his handwriting referring to the letter. The list went on and on.

The trial was held in Alexandria, Virginia, in November 1977. I was advised not to attend the trial as I probably would be called as a witness. I was not called. The prosecution brought in several witnesses from all over the world—at government expenses—to say a few words. Others were put on the stand to “confirm” statements that the defense readily admitted to. The judge began stopping the prosecution from putting many of its witnesses on the stand.

The case finally went to the jury. After deliberating for 6 ½ hours the jury found all of the defendants innocent of all charges.

Cagle and I remained friends and kept in contact. He later thanked me for my efforts to “tell it like it was” to the grand jury. But Cagle and Paolucci were scarred by the experience.

The admiral passed away in 2003. An officer and gentleman, he is remembered as a top-notch fighter pilot, a commander at sea, a training and education expert, and an outstanding author. He also was “good guy.”