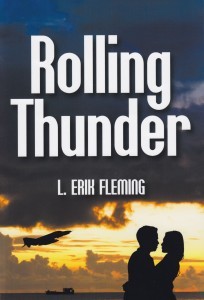 Even though this book is called Rolling Thunder, it is not a history lesson of this operation but an entertaining story about a fictional Marine Captain Valentine Jordan, a fighter pilot assigned to a F4J Phantom II squadron during the controversial Vietnam War. Jordan and other members of his team are stationed on a lonely airstrip deep in enemy territory, not far from Dong Hoi where they go to get supplies. At their base they face terrifying booms of enemy mortars just outside their tents.

The squadron has to look outside the base for supplies when aerial delivery is not sufficient. When it is discovered that Captain Jordan speaks the native language, he is called upon to procure provisions from local merchants. Traveling to Dong Hoi by truck, he meets a beautiful Vietnamese woman from a nearby village. Amid terrible fighting arises an intense love story, giving the reader a rare glimpse into the Vietnamese perspective and culture during the war.

This reviewer (by telephone) spoke to Fleming who lives in California where he is an FAA Air Traffic Controller in Monterey Tower.

The author, who has no military experience, said: “This book is about love overcoming hate, pride, and enmity against the backdrop of a bloody and divisive war. I focused on the war in Vietnam because it will go down in history as the last conflict with true aerial dogfights. Rolling Thunder illustrates the difficult and dangerous tactical maneuvers pilots had to perform to survive.”

Fleming, who owns a “Decathlon,” (small aerobatic airplane) is a flight instructor specializing in aerobatics. He takes the reader into the cockpit of numerous air battles, both on the U.S. side, and the enemy pilots, including a Russian pilot. Fleming knows first-hand the stress,  skill and responsibility involved in operating an airplane. As a military history buff, Fleming understands this stress is magnified in times of war.

An intense wartime drama, Rolling Thunder tackles themes universal to nearly any conflict including: adapting to difficult and unfamiliar territory, love overcoming enmity and bitterness, competing perspectives from both sides of the struggle, and letting go of anger and hostility after a conflict ends. Fleming discusses how aerial combat has changed since U.S. military involvement in Vietnam. He includes comments on politicians and why he believes they are blind to the grief they create.

The author’s story telling talent is exhibited through character development and multiple side stories revolving around his main characters. Fleming said he conducted his research over many years in libraries before information was available on the web. His main character speaks the native language throughout the book, even though Fleming does not speak it. He found many Vietnamese words during his research. In addition to interviewing retired American pilots, Fleming traveled to Vietnam in the early 1990s to talk to North Vietnamese pilots to get their points of view. He said they didn’t hate American pilots per se, but looked at the U.S. as another occupying country. Fleming told this writer, “it did blow my mind to see all the bomb craters,” when he flew over the Vietnam countryside.

Even though Operation Rolling Thunder went from March 1965 to November 1968, Fleming described an OV-10 airplane early in his story, rather than an O-2 or O-1, which were the Forward Air Control airplanes in 1965, and the OV-10s weren’t used until 1968. Fleming explained that he has seen lots of OV-10s fighting fires in California and just liked the airplane. Fleming said: “The story is not historically accurate, it is not supposed to be a history book, although it uses correct tactics and language.”

This book is a compelling and informative read, especially the numerous dogfights. Even though it is fiction, the book needs a Glossary of the numerous military terms and abbreviations. A list of his sources would add to interest to his readers. The book’s cover does not indicate that it is fiction. I would recommend this book which has it all: suspense, drama, romance, and thrills. The excitement combines a love and a war story set in the era of “Rolling Thunder.”

Jan Churchill is an O-1 and O-2 owner and pilot.